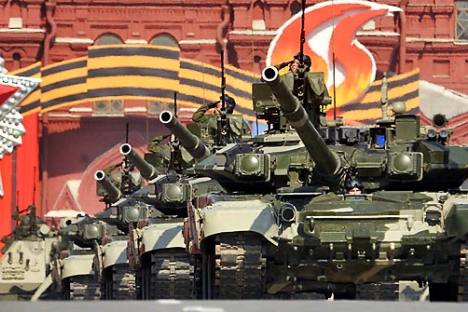 Although "the reform of the Armed Forces has almost been completed,” as said Russia's outgoing President Dmitry Medvedev, there is still a lot to be done to turn the Russian Armed Forces into a modern army. Source: AFP / East News

One accomplishment outgoing President Dmitry Medvedev can be proud of is the reform of Russia’s armed forces.

Russian President Dmitry Medvedev’s speech at an enlarged meeting of the Defense Ministry board on March 20 captured the close attention of military specialists, and not only because the speech might be Medvedev’s final address as the supreme commander-in-chief to the commanders of the Russian Armed Forces before President-elect Vladimir Putin takes over on May 7. The main reason was that Medvedev was, essentially, outlining the results of his command of the country’s army and navy during the four years of his presidency. The words “the reform of the Armed Forces has almost been completed,” voiced at the board meeting, can be considered Medvedev’s final performance report.

The reform did not go off without any hitches, but the results of building up the army and the navy with a view to the future are truly impressive. “Strategic and nuclear forces have been consolidated; a single aerospace defense system has been established incorporating air defense and anti-missile defense, as well as early warning and space control systems,” Medvedev said.

Defense Minister Anatoly Serdyukov added details on the delivery of new armaments and equipment to the Armed Forces. According to Serdyukov, 10 guided missile regiments received new Yars and Topol-M missile complexes, the strategic rocket forces received 39 strategic missile systems, and the share of modern missile systems increased to 25 percent from 13 percent. Since almost half of these missiles were put on combat duty during the Soviet era, or at the latest, the first post-Soviet years, this upgrade of the strategic nuclear deterrent forces is quite impressive.

Twelve Iskander-M short-range ballistic missile systems capable of carrying nuclear warheads have been delivered to the army. Furthermore, three surface-to-air missile regiments armed with S-400 systems have been put on combat duty. Seven large air bases have been created and 28 airfields repaired (for the first time in the past two decades). The recently established aerospace defense force is fully operational – an early warning radar started combat duty in Lekhtusi, near St. Petersburg, and similar radars entered test-and-combat service in Armavir and Kaliningrad Region.

Naval bases are being built in the Murmansk Region, Primorsky Territory and Kamchatka for the Borei and Yasen class submarines, as well as corvettes and frigates. The Bulava missile system will be commissioned in October 2012, together with the Yury Dolgoruki and Alexander Nevsky ballistic missile submarines, each carrying 16 Bulava missiles with 10 individually guided nuclear warheads.

Yet there is more to the story than the mere volume of armaments coming into service. They must be effectively combined with other types of weapon and combat support system, including reconnaissance, target-marking and navigation systems, communication and electronic combat systems, unmanned vehicles and automatic network centric battle and personnel control systems – the components that mark the difference between a contemporary army and an outdated one.

The army has not been yet fully modified, as its reform is still underway, but a further transformation of the army should be treated as revamping rather than reforming.

Serdyukov has made statements indicating that the task of improving the combat and mobilization preparedness of the army to an extent that will ensure the security of Russia and its allies would be performed in 2012. Russia has already completed the formation of the 130th separate motorised rifle brigade, 346th separate brigade and 25th special-purpose separate regiment. It is planning to hold strategic exercises in the Caucasus to test the integrated command structure for the tactical force and armed forces as a whole. A multi-service training facility will be established on the basis of the Ashuluk range. In 2012, the modernization of the command post of the aerospace defense force should be completed, at which time it can be put it on combat duty.

There is still a lot to be done to turn the Russian Armed Forces into an army the country can be proud of and can rely on in time of need, but the willingness of the country’s military authorities to meet this challenge is obvious.