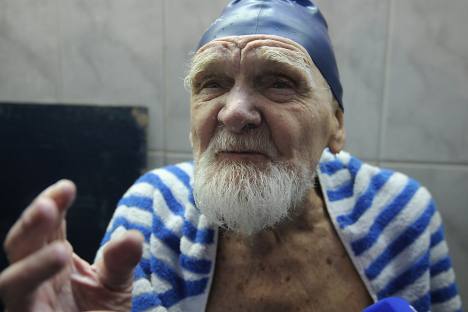 100-year-old Vasili Krapivin believes that there is no special secret to long life: you just have to get up every morning at 6:00 a.m., run down to the sea, take a swim, and run back again. Source: Mikhail Mordasov

Vasili Krapivin has become the first athlete in his age category to swim the distance of 25 meters.

It took Vasili Krapivin 50 seconds to swim the length of a swimming pool freestyle during an open tournament in Sochi. The athlete was the only swimmer in Russia above the age of 100 to enter the official competition.

The category “100 years or older” was added to the swimming championship program especially for Krapivin, who was born in 1912. On the eve of the competition, the organizers suggested that Krapivin try his strength at 50 meters. But after training, the athlete had to acknowledge that he could swim only 25 meters without endangering his health.

Krapivin, a strong centenarian with a shock of white hair, came out to the starting position accompanied by applause and two other swimmers. They served the record-breaker as a back-up team, monitoring his condition. Emergency services physicians were also on duty at the pool. Krapivin swam the crawl for most of the distance, but turned onto his back for the final meters, holding on to floats. The athlete reached the finish with difficulty, but on his own, and then rested for a long time in the water before climbing out of the pool.

After his swim Krapivin accepted congratulations, wished everyone good health, and shook hands with his fans. Some people winced from the steely grip of Krapivin’s fingers. They say that in his strength, he took after his grandfather, who was a boxer. Krapivin said that worked hard and long, beginning in childhood, but that overall he has had a happy life, overall.

Beginning at the age of 18, Krapivin worked in the coal mines near Tula, barely surviving a mine cave-in. He graduated in 1936 from the Tomsk Polytechnical Institute, but was sent to labor camps for 20 years for anti-Soviet propaganda. He was unable to find out specifically what he was imprisoned for: there was no trial. He mined gold and tin ore in Kolyma. Meeting his quota fully, he would receive the full ration of 900 grams of bread, which enabled him to survive. “They have 12 months of winter there, and the rest of the time it’s summer,” the 100-year-old swimmer said about his imprisonment, with a laugh.

After his release, Krapivin he went to work at a ship repair facility in Magadan. The physical education training he had received as a student came in handy there: Krapivin began to coach the factory teams in skating, skiing, middle-distance running, high jump, and throwing the javelin and discus. Krapivin took up all of these as an amateur, for pleasure, not to achieve particular levels in the sports. He amazed all Magadan by going swimming in the Sea of Okhotsk, where the water temperature does not rise above 10 degrees Celsius (50 degrees Farenheit). even on the warmest days.

In the 1960s Krapivin, in need of a change of climate, moved to Sochi, got married, and took up swimming as his regular exercise. He even mastered swimming in a stormy sea: he says the trick is to understand the wave, to feel it, and not to be afraid. He remained active in sports and took part in tournaments, right up until his 90th birthday. Now that he has passed the 100-year mark, he regrets that he doesn’t move around as much. He believes there is no special secret to long life: you just have to get up every morning at 6:00 a.m., run down to the sea, take a swim, and run back again.