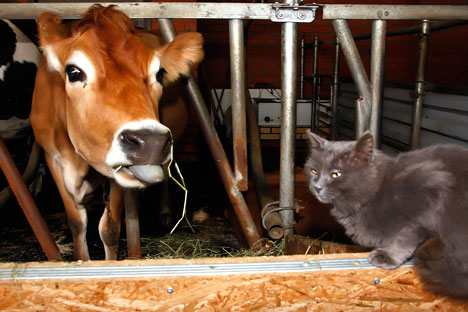 As consumers become more concerned about what they eat, farmers and supermarkets try to supply this demand.

Although organic foods and farm fresh produce are not as in vogue in Russia as they already are in Europe and the United States, the interest in them has already given rise to a few major projects. In Russia, vegetables and meat produced by individual farmers sell for two or three times as much as those from agribusinesses; but even so, they still find buyers.

Buyers of the farm products are usually middle class with some disposable income, concerned with a healthy lifestyle and looking for more delicious and environmentally friendly meals, said Boris Akimov, one of the founders of the LavkaLavka farmers’ cooperative. Founded in 2009 by a group of proactive farmers, LavkaLavka runs a home delivery service for products from over 100 farmers, as well as its own retail store and café.

Related: Back to the village: When nature calls

“The project’s total turnover is roughly 10 million rubles ($350,000) a month, with retail sales generating up to 95 percent of the revenue, and 5 percent more coming from the sale of food to restaurants and eco-friendly stores,” Akimov explained. Last year, LavkaLavka opened an office in St. Petersburg, and is also planning on tapping the markets of Kaliningrad, Ufa, Yekaterinburg and Chelyabinsk by working with local suppliers.

“Our suppliers are the ‘new farmers,’ or private entrepreneurs, much like the old peasants who would have once been called kulaks. Many of them have come down to the country from cities. For some of them, farming is a passion rather than a business. While most of them manage to make money from farming, some are still in the red,” Akimov said.

The items at LavkaLavka are more expensive than at ordinary stores. Milk, for example, costs at least 120 rubles ($4) per liter. LavkaLavka suppliers are positive that there is no way farmers’ products can be cheaper than those produced by agribusinesses. “Roughly 4 kilograms (9 lbs) of high quality sunflower seeds go into just one liter of oil. The price of oil production runs up to 100 rubles ($3.5) without even factoring in any refining, production, transportation, labor, tax or packaging costs. High quality oil simply cannot be cheap,” said a farmer who runs the Peresvet Solnechny farm in the Krasnodar region. A bottle of his sunflower oil is on sale at LavkaLavka for 600 rubles ($20).

The seller marks up the price set by the producer to cover the costs of transportation, storage, rent, wages, and operating and development expenses. As a result, the farmer receives no more than 50-70 percent of the sale price, while the remained goes to the store. For example, LavkaLavka buys Kalmyk lamb meat from Yury and Dordzhi Bulkhukov for 350 rubles ($11) per kilogram, and sells it for 600 rubles ($20).

Still, farmers’ products are not necessarily expensive. For instance, the Moscow-based ABK supermarket chain has been buying seasonal vegetables from farms in the Vladimir region for a few years now. Their vegetables are actually cheaper than imported groceries, said Vladislav Yegorov, co-owner and chairman of the Board of Directors of ABK. “Consider cauliflower, for one. The import purchasing price is some 45 rubles per kilogram, but in season farmers are ready to sell it for 15 rubles,” he said. The freshness of Vladimir farmers’ products is the second important advantage. “With foods like cucumbers, the time lapse between harvest and sale is absolutely critical. What we have here is a cucumber harvested the day before that is already on the shelf. Customers really appreciate that,” Yegorov said. Although the chain buys only a few vegetable items from individual farmers – some types of cabbage, potatoes and squash – they still account for a considerable portion of the retailer’s sales.

This cooperation with Vladimir farmers even inspired ABK last year to buy a land plot close to Vladimir where a warehouse is now being built to store and provide primary processing for the vegetables purchased from farmers. “The plot of land is fairly large, so I even think that in addition to the warehouse we could grow our own crops there. But private label vegetable fields are clearly a non-core business. Our aim is still to expand cooperation with local farmers, especially since in recent years they have started growing vegetables specifically to meet our demand. We place our orders with them before the planting season starts,” Yegorov said.

But ABK is a modest chain of 38 stores, and nationwide retailers generally find it more difficult to deal with small farms than large suppliers. Chains of a few hundred or sometimes even thousands of stores need products to come in large batches, on a guaranteed schedule, in a guaranteed amount and with guaranteed quality. Private farmers can rarely meet these requirements, said Ilya Belonovsky executive director of the Association of Retail Companies. At the same time, farmers’ products are in high demand among customers, especially dairy products. Whenever a store sells milk supplied by farmers, the sales volume is equal to that of packaged milk. While stores earn as much on such products as they do on those manufactured by agribusinesses since the mark up is the same, farmers definitely benefit more from retailing since retail prices can be twice as high as prices paid by processing companies, Belonovsky added.