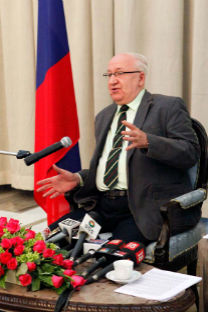 On March 26, 2012 in New Delhi H.E. Mr Alexander Kadakin, Ambassador of Russia to India, gave a briefing on the forthcoming BRICS Summit on March 28-29.

The Ambassador noted in his remarks that BRICS evolution follows the objective trend towards the formation of a multipolar system of international relations and increasing economic interdependence. In a way, it is a prototype of the future model to run world affairs.

Alexander Kadakin emphasized: “BRICS is not a military or political block or an ideological group to fight others, but at the same time it is a serious transnational group that can play a key role in reforming the world management system.”

BRICS influence in the international arena is a result of the growing economic power of its member states and their important contribution to global demography and natural resources supply, Alexander Kadakin added.

The Ambassador said: “Over the past decade, the BRICS countries’ economy has grown by 4.2 times, compared to 61 per cent growth in the developed countries.”

Alexander Kadakin added: “The contribution of BRICS countries to the global economic growth has reached about 50 per cent over the last ten years, making this group the principal driver of global economic development.”

The Ambassador also stressed that the current 4th BRICS summit will be one of the central events in the international life in 2012. “Russia expects the forthcoming summit to take decisions capable of making a tangible positive impact on the economic, financial and international political situation, of strengthening BRICS positions in the world and promoting our cooperation in a broad range of fields”, he said.

Alexander Kadakin defined the following Russian Side’ priorities at the summit:

1. First of all, we are interested in profound analysis of the world economic and financial situation and in coordination of positions among BRICS members in the run-up to the G-20 summit in Las Cabos (June 18-19, 2012). Our position should be  coordinated, we should put forward single ideas in the Group of Twenty.

2. The New Delhi summit participants will  discuss the issue of global development and aid to the poorest countries in the run-up to the special conference in Brazil this year. For the settlement of this problem the BRICS countries have the idea of creating a South-South development bank.  It is unclear so far when and on the basis of what it will be set up, the finance ministers are discussing this.

3. We believe that the summit will further discuss the scale and conditions of possible BRICS participation in contributing to the IMF financial resources, following our leaders’ discussion in Cannes.

4. We proceed from the understanding that the summit will discuss the IMF reform. In this context we expect discussions on the expansion of the possibilities of financial settlements between the BRICS countries in national currencies. During the summit the signing of interbank agreements on this is expected.

5. The summit will definitely review international political issues, with the situation in Syria and around it being in the forefront. There are unceasing clashes between government troops and illegal armed groups in the country. Foreign interference in domestic affairs is ever-increasing under the pretext of “protecting civilians”. Russia’s position on Syria is well known. But we need to understand the position of partners in order to coordinate our actions in the organizations where the decisions are made - the United Nations, the UN Security Council, to take in into account during the political dialogue. At the summit the leaders will try to coordinate their positions.

6. We also look forward to discussing the situation around Iran.

We are worried at the US and Israeli threats to use force against that country. A new war in the region, already overburdened with armed conflicts and acute crises, will rapidly deteriorate the situation in the vast Asian region, will entail shocks in the oil market and, therefore, in the entire global economy. Hopefully, the New Delhi summit will give a clear warning signal against military adventurous plans in the Gulf and will speak with authority in favour of renewed constructive dialogue of the international community with Iran over its nuclear program. If sanctions are unilateral, and we do not support them as a matter of principle, there should be tools to continue the interaction.

7. We also underscore energy security. We deem unstable the situation in global energy security. In this context we welcome the proposal of our Indian friends to set up the BRICS Energy Forum. Russia will participate in its work with great interest and will support India’s initiative to establish an energy forum, which could contribute to the strengthening of stability and security in the energy sector.

8. BRICS is not limited only to annual summits of the “Group of Five”. The leaders’ decisions find elaboration in a dozen of cooperation formats, including meeting of High Representatives in charge of national security, meetings of foreign ministers, finance ministers, trade ministers, health ministers, agriculture ministers. Business circles of our countries get increasingly engaged in the BRICS activities. The BRICS Business Forum in New Delhi will see an unprecedentedly large Russian delegation – around 80 captains of the Russian business, besides a special economic forum.

The press conference further saw numerous questions from journalists on the agenda of the upcoming summit as well as vital aspects of Russian-Indian bilateral cooperation.