The russophile dilemma in India 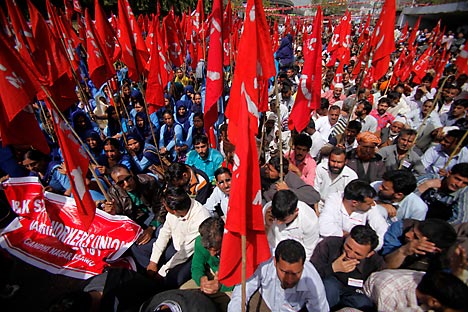 A Russophile doesn't have to be communist

In India people who sympathise with Russia are often classified as ultra-leftists. But times have changed, and the word Russophile does not have to mean communist.

Such is the extent of ‘Americanization’ of the middle class and upper middle class Indian psyche that anyone who claims to be sympathetic to Russia is automatically classified as a communist or an ultra-leftist. When I tell someone in India about the time I spent in Russia, the first question I have to deal with more often than not is whether I am an alumnus of Jawaharlal Nehru University (JNU), a hotbed of leftism in the country. The logic behind such a question would be on the lines of “only a JNU-attending Marxist would look at Russia fondly, since it is a communist country.” It can be frustrating trying to convince people that Russia abandoned communism and its leftist ideals after the collapse of the Soviet Union.

For years, I wondered how Indians still associated Russia with Gorbachev and Khrushchev, when Russia had moved on long ago. My doubts cleared up at a recent cultural programme that brought together so-called well wishers of Russia. The crowd comprised of Russian expats of all age-groups, old-Soviet hands, a set of university professors, young men in Che Guevara t-shirts and some doctors and engineers who studied in the USSR in the 1970s and 80s.  For the Indians on the guest-list, it was more or less a “nostalgia” evening.

One particular “expert” who made presentations at conferences spoke to me about his time in Moscow, when Brezhnev was in power. “Those were the days,” he said. The man, who could manage a decent Russian conversation, last set foot on Russian soil in 1985! Yet he was looked upon as an authority on the country. When I asked him as to why he hadn’t been to Moscow in so long, he responded by saying (and this was after a few vodkas) that he would have to pay for the travel and stay himself! Of course, I had heard of this type of Soviet-hand before. They were perfect tools who would courier the Soviet way of life to the Third World in return for a series of benefits that included annual paid-vacations to the country.

The “expert” got into an argument with a young Russian expat, who said he prefers the way the country is at the moment. “You are an American stooge,” the expert said in Russian. “How could someone not prefer the socialist paradise that the USSR was,” the man, who by then had too many glasses of vodka, asked me.

I am not going to go into the positives and negatives of the USSR. In conversations with people of all age groups from St Petersburg to Petropavlovsk-Kamchatsky, I have heard every kind of opinion, good and bad. The fact is that Russia is a completely different country now. You can still see Lenin statues in many cities and there are men in all kinds of uniforms roaming around the smallest of towns, but Russia is just about as capitalistic as it gets. Most Russians pay a hefty amount of money for higher education and several benefits to “weaker” sections of society have been removed along with a host of state-subsidies for those living in far-off regions. Some Russians complain of a ruthless kind of capitalism in their country.

There is an unbelievable disconnect between Russia’s well-wishers in India and the reality of Russia in 2012. Yes, the older generation fondly remembers Raj Kapoor and Mithun Chakraborty is still popular with the late-30 somethings but most Russians now go and watch dubbed versions of American films. You can watch a Hollywood film even in a small cinema hall in a distant outpost like Sov Gavan in the Khabarovsk territory. America may not be the most loved country in Russia, but as far as the Russians are concerned the Cold War is a part of history. You would still hear the ‘impending doomsday predictions,’ for America in cafes in St Petersburg, but dislike for the United States would probably end with that.

The Russophiles in India would like their countrymen to believe that the ideals of communism that they grew up on are still revered in Russia. Nothing could be farther from the truth. I remember being part of a heated debate between some young people about the Russian Federation and the erstwhile Soviet Union. There was a consensus when someone suggested that the very fact that Russians and foreigners were sitting in one room and talking about these kinds of things without being watched by “big brother” is a testament to a better life and more freedom.

Tremendous goodwill for India exists across the length and breadth of Russia and there has always been some sort of invisible thread linking the two great countries, even before the days of Indo-Soviet bonhomie.  Russians are actually more eager to interact with an Indian middle class that is pro-Western, than with Marxist academics longing for the USSR. Russia and India are consumerist societies and ‘keeping up with the neighbours’ is an integral part of the modern psyche of both countries.

It’s time to shed the Cold War mentality in India once and for all. To promote Russia in India, the Russophiles would be better served to promote Russian culture, literature, science and technology, tourism and even Russian food, considering that young Indians are now more adventurous with food than they have ever been. Russian culture needs to be promoted as being “cool and exotic,” instead of something that is associated with Marxists Anonymous and other groupings of geriatrics. Enough people in India would be enamoured with the opulent beauty of St Petersburg. Young Indians would enjoy Trans-Siberian railway journeys and trip to cities in the Far North like Murmansk and the country’s natural wonders like Lake Baikal and the volcanoes of Kamchatka. Most importantly, a confident and young India does not need enemies or to be forced to take sides. Being pro-Russia does not have to equal being anti-America.

In an increasingly globalised world, there is plenty of room for synergy between Russians and Indians; and a potentially wonderful and secure relationship that looks towards the future and not the past.

Ajay Kamalakaran was the Editor of the Sakhalin Times from 2003-2007.