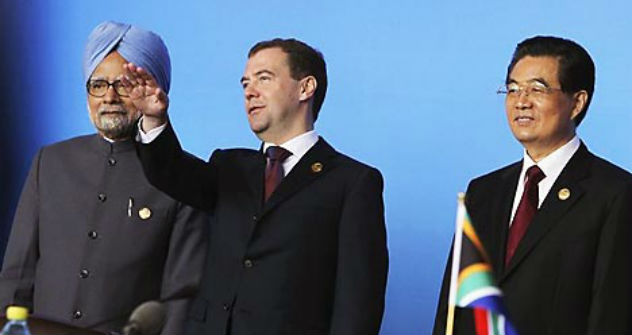 Russia's President Medvedev called for a key role for the BRICS nations in world affairs, and demanded faster modernization of the world financial system to reflect their growing role, following talks with BRICS nations leaders in Delhi on Thursday.

The BRICS nations are dissatisfied with the pace of reform of the world's financial-economic architecture which fails to take sufficient account of their role in the global economy, Medvedev said.

"I consider that the guarantee of the success of the BRICS project may be the commonality of our core interests," Medvedev said at a BRICS nations leader's summit in Delhi.

"We are all interested in reforming the world's ageing financial system. Such reform is proceeding, but today we are expressing our displeasure at the speed at which it is going ahead, which is reflected in the draft of our statement. It is not taking into account the role in the global economy, which the BRICS and other states with developing markets already play ," he added.

“Discussion, of course, is foremost about the reform of the IMF. This reform should be carried out to the end, and done as we agreed within the G20 – not putting it off because problems in the international financial system persist,” he said.

The summit declaration also calls for overall reform of the UN, including the UN Security Council, to make the organization more effiecient.

The BRICS could become one of the key elements in the system of global government, President Medvedev said, and should develop a new model of relations beyond any established stereotypes and above "bridges" or "intermediaries."

Such approaches toward uniting states with a total population of almost 3 billion people would undoubtedly limit their possibilities for carrying out an independently agreed course in the international arena, he said.

China's President Hu Jintao called for a “multi-polar approach to world politics” and said BRICS countries should enhance cooperation within the framework of G20, the United Nations and other international structures.

“Cooperation in politically important spheres is a basis for cooperation between the BRICS countries,” Hu said. “We should strengthen political interaction through dialog and exchange; fully take into account key interests and concerns of each other in order to give an example of mutual respect and equal consultations on the international arena.”

The world's top emerging economies warned the West against allowing the Iran situation to "escalate into conflict" and emphasised that the Iranian issue and Syria crisis can be resolved only through dialogue.

"We believe that it is important not to allow foreign intervention in Syrian affairs, let the government and opposition finally launch dialogue without damaging it, without saying that it is a priori doomed to failure and that only military action can restore order," Medvedev said.

"We agreed that a lasting solution in Syria and Iran can only be found through dialogue," Prime Minister Manmohan Singh said in a closing statement at the fourth BRICS summit of Brazil, Russia, India, China and South Africa here.
The Delhi Declaration issued at the end of the summit conveyed the perception of the BRICS countries, on these important global issues that draw them against the Western approach of imposing sanctions and considering  the use of force to resolve complex global issues.

Supporting Iran's right to peaceful uses of nuclear energy, the BRICS countries said they "support resolution of the issues involved through political and diplomatic means and dialogue between the parties concerned, including between the IAEA and Iran and in accordance with the provisions of the relevant UN Security Council Resolutions".

The BRICS leaders also welcomed the appointment of Kofi Annan, a former UN secretary general, as the joint special envoy on the Syrian crisis and supported him in his efforts play a role in spurring a political resolution of the crisis.

Russian president Dmitry Medvedev warned against external interference, saying that it has the potential to destroy the dialogue process. Medvedev added that he has proposed a collective humanitarian aid by the BRICS countries to the Syrian people.

The BRICS' stand on Syria and Iran will be viewed with unease by the West which has tended to see the five-nation grouping as an attempt at an alternate world order.

In this respect, the fourth BRICS summit in Delhi marked the evolution of a group focused on global economic governance issues to one which is trying to achieve greater political coherence.