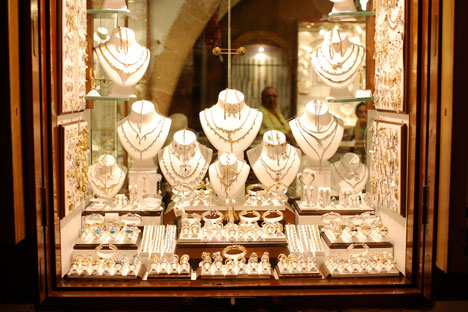 In 2012, China and India will become the drivers of the anticipated price surge on the diamond market, Russian experts believe. The demand is continuing to grow while the supply remains the same.

In an old joke, an unapproachable lady advised her desperate admirer to try and conquer her stone heart with a diamond. It appears men will be paying more and more for diamond keys to women’s hearts, the main reason being the growing demand for jewellery in Asia.

Russian diamond miners were less confident a couple of years ago. The most recent global downturn, in 2009, caused ALROSA to suspend global operations because of the slump in demand. Yet it was because of that slump that Russia registered a double-digit growth in exports – the diamonds deposited with the State Repository for Precious Metals were also put up for sale then. “When the market started recovering, they were buying large amounts of raw diamonds, even more than they needed to form stocks”, ALROSA spokesman Andrei Polyakov says. So the reduction in foreign supplies of raw diamonds in 2011 is a normal market adjustment following the period of tempestuous growth.

In the first half of 2011, the demand continued to grow, but then the market appeared to be overstocked and, starting in October, ALROSA substantially reduced sales on the spot market in order to maintain the price level.

ALROSA is Russia’s biggest diamond producer. Of more than 35 million carats of diamonds produced in Russia in 2011, ALROSA accounted for 34.438 million. Independent producers, including Uralalmaz, which is part of Lev Levayev’s Ruiz, and Yakutia-controlled OAO Nizhnelenskoe, produced a total of 700,000 carats of diamonds in 2011.

ALROSA has reported an 8-12% growth in the demand for diamonds and diamond jewellery since the start of the year amid a slight reduction in the global diamond output. “In 2012, we are saying that the market is good. We have excellent first quarter results and our sales volume exceeded $1 billion”, Andrei Polyakov said.

He said that ALROSA is producing the same quantity of diamonds as in 2011, while expecting a strategic rise in prices, albeit with possible time correlations. “We are not seeing any more raw materials, though consumption is growing, especially because of the Asian markets”, he added.

The biggest buyers of Russian diamonds are Belgium (Antwerp is the diamond industry’s business centre), which bought more than 18.8 million carats in 2011; India, with imports reaching almost 6 million carats; and Israel, which imported about 3.5 million carats.