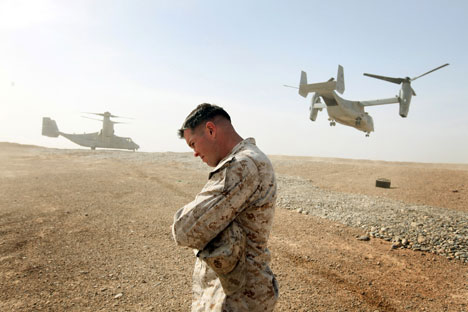 It remains to be seen whether the U.S. will be able to withdraw its troops without much loss of face. Source: Reuters / Vostock Photo

Russia tries to assert its position as the U.S. plans its withdrawal from Afghanistan

On such a day, when Russian Foreign Minister Sergey Lavrov spoke to the State Duma, telling a story of successes and challenges of our country’s foreign policy, U.S. Secretary of Defense Leon Panetta was in Bishkek and met with his Kyrgyz counterpart Talaibek Omuraliev and secretary of the Security Council of the Republic Busurmankul Tabaldiyev. It may be strange, but topics of conversation of Russia’s and the United States’ high-ranking officials with their interlocutors, in spite of the enormous distance between them, willy-nilly, intertwined. In either case the question was about the upcoming withdrawal of the U.S. troops from Afghanistan, the routes of withdrawal and the great difficulties associated with this procedure.

The US interests in Afghanistan and Central Asia

This is Afghanistan’s ‘My Lai’

However, in the great scheme of things, there was nothing strange in these talks. The entire world knows that by the end of 2014 the United States and its NATO allies and partners will have completed their own joyless long-term mission to help stabilize the situation in Afghanistan (ISAF) and are going to almost completely withdraw their military contingent of many thousands. The southern route through Pakistan, through which in all the ten years the lion’s share (40%) of supplies for army units engaged in Afghanistan passed, has been almost closed for them since last December. Then, as a result of the U.S. drone aircraft strike on Pakistan’s border guards more than two dozen local soldiers were killed. If Islamabad agrees in the long run to unblock this road, in any case it will not be able to provide full security for Pentagon’s vehicle convoys, at which in the narrow mountain serpentines the Talibs or local tribes hungry for prey and subordinated to nobody will again fire.

And it is clear that it is very important for Washington to reserve the right to the Northern Distribution Network, of which the major transit hub is Manas - the Kyrgyz airport and the Transit Center at the same time. But the leadership of Kyrgyzstan, including Kyrgyz President Almazbek Atambayev, has repeatedly stated that they were going to close this base. The more especially as at the end of 2012 the term of its lease vested by bilateral agreements with the United States will have expired. And furthermore it is demanded by Bishkek allies of the Collective Security Treaty Organization (CSTO), and, although almost nobody is writing about this, by China too - the nearest neighbor of Kyrgyzstan. China does not like very much the presence of U.S. aircraft and flights, and U.S. militaries a few hundred kilometers from its own borders.

The prospect of losing Manas extremely disturbs Washington. That is why Leon Panetta has so quickly arrived in Bishkek to persuade his counterparts to extend the lease on the transit hub for several years more. He made no secret of the fact that the retention of the Manas base to support U.S. forces in Afghanistan is one of the most important on its negotiating agenda. “The transit center at Manas is crucial for the northern distribution network through which U.S. forces in Afghanistan are supported. This network has acquired critical importance in recent months since the transit routes through Pakistan closed,” says the press statement of the Pentagon chief.

And although Panetta flew to Kabul, without having met with the president of Kyrgyzstan Almazbek Atambayev, despite the fact that he sought this meeting, Kyrgyz officials, according to The New York Times, gave him to understand that they were ready to consider the extending of the base lease. And this is not the first time when the republic’s leadership changes its views on the run.

Discussions around the Americans using the base in Manas have been going on for several years. In 2009 the United States for the first time succeeded in persuading the then President of Kyrgyzstan Kurmanbek Bakiyev to extend the lease until the end of 2012, of which the cost rose from $17 million to $60 million annually. Now Washington hopes that offering Bishkek an even higher price, it will stay in the country for the next term. And it seems not to be wrong in its assumptions. Its interest is clear. According to the data from Pentagon, from the Manas base annually more than 4.8 thousand flights are carried out to perform about 24 thousand refuelings in the air of the American fighters patrolling in the Afghanistan sky. And this is not to mention thousands of tons of cargo passing again through this airport. In addition, more than 580 thousand passengers annually fly through Manas, mainly to Afghanistan or from there.

And yet, in connection with the forthcoming withdrawal of U.S. troops, Manas, no matter how critically needed it was for the Pentagon, is not able to ensure all export-import operations. It is imperative for Washington to expand its transit flows through the northern route. And as it became known, it is looking closely at the Eastern airport located on the outskirts of Ulyanovsk. American military commanders have already come here, carefully inspecting the port site, its landing strips, familiarized themselves with the dispatch service, and, in the opinion of the local press, were quite satisfied with what they saw. This is not surprising. The airport was built here in the late eighties as a reserve landing area for the domestic Buran space plane.

The project of the Buran space plane, unfortunately, failed through no fault of the residents of Ulyanovsk, but the landing strip on which all type and purpose aircraft can land and take off, has remained. It is not only part of the city aircraft building plant, but also a reserve area for any other aircraft. The idea of use it for the transit of U.S. and NATO cargo from and to Afghanistan seemed very attractive for Russian experts too. A railroad and the East-West federal highway come up to the aerodrome. Having hosted here a cargo aircraft from Kabul or Bagram (by the way, these shipments may also serve private domestic airlines, such as Volga-Dnepr, possessing the world’s largest transporters AN-124-100), they would be able then to transfer the cargo to the railroad and already by rail they would send it to Riga or Tallinn for transshipment to carriers coming to ports in Europe or the U.S. This is very profitable for both Russia and the United States and their Allies from a financial point of view. And it is also convenient from the viewpoint of freight transport logistics.

However, the idea of creating a kind of NATO-US cargo transshipment hub or an overseas base in the Land of the Volga caused a strong reaction among the Russian public organizations, mainly nationalist and patriotic ones. There’s been a wave of publications, whose main motive can be expressed in the slogan “Yankee! Hands off our land!” Our CSTO allies have also become anxious, although their voices did not get into print, but on the sidelines of the organization staff and secretariat, they remind that last December at the CSTO summit in Moscow, the presidents of this union member countries, had agreed that any foreign base on the territory of the CSTO can be opened only with the consent of all member states. Now it turns out that in Bishkek the U.S. military base should be shut down, and in Ulyanovsk it will be open. It is unclear how this may be, if for some reason this issue was not discussed among the allies.

This reaction caused the backlash on the part of high officials of the country. Deputy Prime Minister Dmitry Rogozin, recently represented our country in the NATO headquarters in Brussels, said in his blog that the issue is not about the U.S. military base and NATO in Ulyanovsk. “I’m tired of reading about “the U.S. base near Ulyanovsk,” he said. Let me explain: we are talking about the so-called “multimodal transit of non-lethal goods.”

Rogozin explained that “in Ulyanovsk, mineral water, towels, tents, etc. are transferred from trains to planes, and then are delivered to Afghanistan - to the Western coalition troops.” “This transit is commercial, i.e. the Russian Federation budget gets money for it. I do not think that the transit through Russia of NATO toilet paper is a betrayal of the Motherland,” he said.

Russian Foreign Minister Sergey Lavrov supported Rogozin during the Government Hour in the State Duma in his speech, mentioned above. The draft agreement on the transit center in Ulyanovsk has not been yet submitted to the government, he explained, and is not yet in force. However, according to Minister of Foreign Affairs, “we are interested that those who repress the threats creating problems for Russia inside Afghanistan could effectively perform their tasks.” And another thing, said the minister, “the transit of nonmilitary cargo to Afghanistan is regarded by us as a means to assist those who eradicate terrorist and drug threat in Afghanistan.”

Lavrov said that the transit is made under intergovernmental agreements signed with NATO as a non-military cargo delivery organization. In addition, between a number of European countries, Russia and the U.S. there are bilateral agreements in force on the supply of military goods. And there is nothing fundamentally new the future agreement with the U.S. on the transit center in Ulyanovsk can provide for. And the Russian Foreign Ministry spokesman Alexander Lukashevich in his statement released on March 15 said that “we’re not talking any military bases or facilities. It is exclusively civilian objects of logistic support - temporary storage warehouses, etc. that would be involved for the purposes of possible transit. The presence of NATO personnel is not expected.”

Lukashevich recalled that in May 2011 the NATO leadership asked the Russian Federation to consider the possibility of extending the simplified procedure for the transit of non-lethal cargo of the International Security Assistance Force (ISAF) in and from Afghanistan by a combined way - by rail, highway and air transport. “Engineering capabilities of such a transit scheme have been worked out - with the involvement of Ulyanovsk East Airport,” he explained. - The general development prospects of the region infrastructure have been considered, as well as creating new jobs.”

According Lukashevich, priority is given to the creation of a reliable mechanism for monitoring the ISAF cargo by Russian customs authorities in order to eliminate the use of this route for drug trafficking. The relevant provisions would have been recorded in exchange letters with NATO representatives. “The Russian MFA in conference with the competent Russian authorities has prepared a proposal to create a necessary legal framework for the possible launch of the combined scheme of transit. The issue is under consideration by the Government of the Russian Federation,” the official assured.

And still, questions have remained open. Not least of all is this issue - if the transit center in Ulyanovsk is so important for the U.S., as our experts say, and we are ready to meet American requests then what will we receive in return, except money? Problems of control over our own air lines, rail and highways, or something more substantial? For example, Washington’s willingness to meet our concerns about the deployment of U.S. missile defense system along the Russian borders? Or will we, like Kyrgyzstan, content ourselves with only dollars?

The questions are open.