Sovereignty is foundation of BRICS 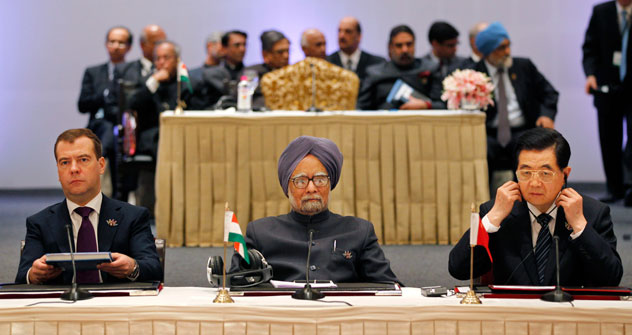 Each BRICS summit sets off a new round of debates on the essence and the future of this unusual international format.

Most Western commentators are skeptical about what they consider an accidental and artificial association. Interest in this five-member group is accompanied by numerous doubts about its future even among its member-countries, particularly India and Brazil. Indeed, it is difficult to find a group of states that are so different in so many different ways. Their cultures, as well as geopolitical and demographic features, are poles apart.

The initial principle of “growing markets,” according to which Goldman Sachs invented the term BRIC a decade ago, is no longer applicable. Russia is obviously lagging behind other members of the group. It is no surprise that the media often refer to “post-BRIC Russia,” a term coined by experts of the European Council on International Affairs to capture Russia’s stagnation and decline.

Be that as it may, the BRICS countries regularly get together, attracting more and more attention from the rest of the world. What is the secret of this association?

BRICS is held together and pushed forward not so much by the requirements of its member-countries as by the general situation in the world. Changes are rapid and unpredictable, and the recipes for resolving international issues offered by the usual leaders (the West) either don’t work or produce the opposite effect. There is a demand for alternative solutions, although for the time being not a single state playing a major regional role (and the BRICS countries fall into this category) has the opportunity (or desire) to offer a comprehensive global vision.

All of them, taken together, prefer to keep a low profile because their importance is recognized anyway and they are not willing to shoulder the burden of responsibility. (In a way, Russia is an exception because of the global inertia that is winding down.) However, the world is becoming increasingly multi-compositional, and non-Western great powers are unwilling to miss a chance to display their common views despite all doubts and differences.

However, so far this ambition is just declaratory. BRICS has not yet realized its potential as an influential international entity. Suffice it to mention the appointment of a new managing director of the IMF last year after Dominique Strauss-Kahn resigned amid scandal. When he was appointed in 2007, many thought he should be the last European to occupy this position and that it was time to give up the tradition of appointing Europeans established in 1944. At the previous summit in China, BRICS countries announced their intention to nominate their own candidate. However, this plan ultimately faded away and all the states of the group preferred to make separate agreements with the United States and Europe on the terms of support for their candidate. As a result, Christine Lagarde from France was designated as the new managing director. BRICS demonstrated unity on the Libyan issue when it was voted in the UN Security Council in March 2011 but their positions diverged on Syria early this year.

The BRICS countries are divided by even deeper differences that are a source of permanent grievances in some cases. Thus, Brazil, India and South Africa insist on increasing the number of permanent members in the UN Security Council. Its current status has long come into conflict with the alignment of forces in the world arena, and the need for change is universally recognized. These three countries consider themselves the best candidates for new permanent members, and few countries oppose this idea. However, whenever this issue moves to the practical plane, the current permanent members of the Security Council start to pretend that this is not their concern and that the issue is very complicated. This is no surprise – there are no precedents in history of countries with exclusive privileges sharing them with others of their own volition. But this attitude impedes the consolidation of BRICS.

In his program article on foreign policy, published a week before the presidential election, Vladimir Putin had positive things to say about cooperation within BRICS, laying emphasis on one particular aspect. The future Russian president sees the unifying factor in the fact that all BRICS countries not only have similar views on the need for a new, multipolar world order, but, most important, share one and the same basic value – national sovereignty as a fundamental structural element of the world system. This concept is an alternative to the Western approach that is based on the premise that today sovereignty is no longer as sacred and immutable as it was in the past.

This view is well-grounded. All BRICS countries enjoy practically full sovereignty. They have broad latitude in their actions, rooted in their material capabilities, and they are not restricted by formal alliances. There are not so many states in this category. European countries, for one, do have an economic foundation but are often much more tied up politically. The question is whether this conceptual community is enough to create a framework that can be filled with economic, geopolitical and ideological content. This process is obviously slow and has no guarantees of success, but the ability of BRICS to develop in the face of universal skepticism gives cause to hope that it will continue to evolve.

Fyodor Lukyanov is Editor-in-Chief of the Russia in Global Affairs journal – the most authoritative source of expertise on Russian foreign policy and global developments. He is also a frequent commentator on international affairs and contributes to various media in the United States, Europe and China, including academic journals Social Research, Europe-Asia Studies, Columbia Journal of International Affairs. Mr. Lukyanov is a senior member of the Council on Foreign and Defense Policy and a member of the Presidential Council on Human Rights and Civic Society Institutions. He holds a degree from Moscow State University.