The best news is fake news 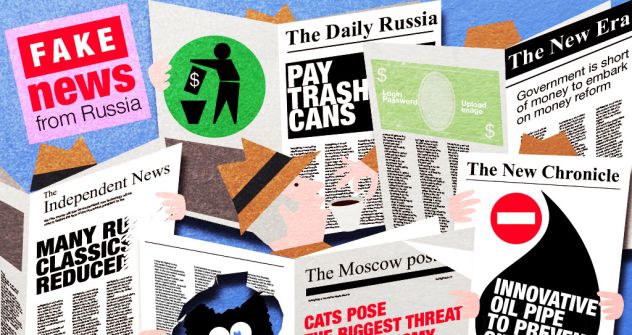 Russia has seen the appearance of a group of satirists hoping to imitate the success of the American spoof news agency The Onion.

Long before it was finished, residents of Barnaul (3,400 km from Moscow, pop.: 600,000) discovered a website purporting to be about their city's underground transport system (or metro).  Danil Churilov, the site administrator, was "dumbfounded by the number of users who began to send feedback about the daily operation of the metro. I was inundated with complaints about broken escalators. About someone being stopped and fleeced by the police. There were even messages in the guest book from Muscovites wanting to know what time it opened because they had to get from the airport to their hotel." The thing is there is no metro system in Barnaul, never has been, and probably never will be.

Churilov’s initial idea of  "creating a trivial little site to fool friends" was quickly abandoned, and soon regular updates on the metro were being posted, all the while the number of people taken in by the charade continued to grow. Even assuming that few people in Western Russia have a good sense of where Barnaul is, some Barnaul residents also were unaware that they were having their leg pulled.

"Fooling people is pretty easy, but not that interesting," said Alexei Lavinsky, who conceived the idea of the fake news site Smixer.ru. “You can write headlines like: ‘Famous Singer Gets Divorced’ or ‘Putin Resigns,’ things that aren't true. But what's the point? Where's the hook? And who'll believe it the second or third time? For me, the best stories are the ones immediately recognized as untrue, yet they get cited by the masses because they're entertaining or humorous," he said. "The purpose of fabricated news is not to create a hoax. For a fake news item to succeed, it should be well-written, interesting, funny, satirical, slightly mocking with a touch of parody, and much else besides. Sometimes it is authentic news, with no element of hoax whatsoever, but written in the style of Aesop.”

Take Fognews.ru, for example. After its "breaking news" story about a ban on going outside without underwear spread across Russian cyberspace, the creators of the site decided to cash in. "We have something to offer advertisers. What we provide is in sync with the format of the online resource and increases brand recognizability, causing a surge in sales," say the brains behind the project, who prefer not to disclose their real names. But so far the newborn enterprise has yet to earn its keep, “the main source of income is the enthusiasm of the editorial staff.”

“To successfully disseminate frivolous things, non-frivolous investments and professionals are required,” said Lavninsky, whose Smixer.ru remains a non-commercial hobby, albeit one that brings in a small income. “There has to be clear understanding of the format. The authors of the texts have to create news, not spin yarns.”

A representative of fake news site Hobosti.ru from Novosibirsk added:  “As regards fake news, the situation is nuanced. Such stories must have the power to surprise. This is hard, since more effort is required to maintain the element of surprise. Once every few months the project has to move up a gear, so that the perceptive reader says: ‘Ah yes, it's developing,’”

Can the Baunaul metro rise to the next level? “The idea of having a metro is a dream. But it's grounded in reality. The cost of construction is not as great as you might think. Plus local businesses and industry can join the project. Barnaul has everything — the question is who will develop it? What's needed is a large, sound investment project that would bring business to local firms on one hand, and increase the region's investment appeal on the other. When you think about it, why on earth not?" said Churilov. For him, the “Barnaul metro” is not just a game or a hoax. It's an investigative experiment into “what actually creates reality, and who creates it.”

Americans have The Onion, but Russia has HOBOSTI, a fake news channel whose name plays on the way the Russian word for news looks to those who don’t read Cyrillic characters. Is it funny? You decide.

- Cats pose the biggest threat to the Russian economy

Quote: “Cats on the Internet are topping today’s agenda for the St. Petersburg Economic Forum. A specialist with the anti-procrastination office said: “They call these cats ‘kotushenki’ and exchange astronomic numbers of pictures on a daily basis. ‘Kotushenki’ account for 32 percent of Russian Internet traffic – look how cute this one is.”

- Government is short of money to embark on money reform

Quote: “The new money project is ready. The bills won’t have barbaric watermarks to protect them but will employ nanotechnologies. The image on the new money will also be modernized; new technology will be used to feature the face of the incumbent president on the banknotes but, when a new head of state is elected, the image will change automatically.”

No Money for New Money

- Many Russian classics to be reduced by a third

Quote: “Some Russian classics are too long and are not always comprehensible to contemporary readers,” said a source at the Culture Ministry. “Take Leo Tolstoy’s ‘War and Peace’ – it is quite interesting but too long, and sometimes whole pages are written in French. This is not right, when you have to learn French to read a Russian novel.”

Quote: “The new St. Petersburg trash cans operate in such a way that you cannot put anything inside at first. The lid will be shut tight by a secret mechanism,” the developers of the new bins told Smixer.ru.

“But the bins are equipped with bill acceptors. Every civilized resident or guest of the Northern Capital will be able to place trash inside for a symbolic fee of 20 rubles (the fee may be higher in the city center) instead of throwing it on the pavements that Pushkin and Brodsky used to walk.”

It’s a privilege not to litter

Quote: Russia loses an estimated $1.5 billion annually from thefts of oil from transit pipelines. Now, a new kind of pipe will be properly protected against theft. The Uroborus pipeline is shaped like the ancient Egyptian serpent eating its own tail. Owing to its unique concept, Uroborus will be protected against any attempts to siphon off transit oil, as it has no exit point – the pipeline is a closed circuit system.