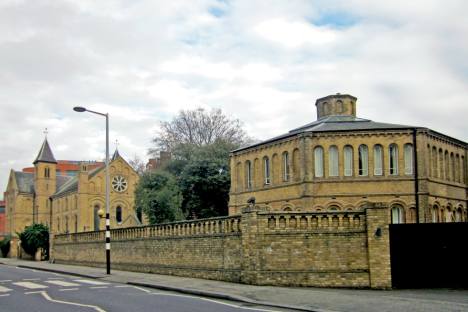 From Herzen’s house to Lenin’s library, London is full of places associated with Russian writers and thinkers.

The new Russian Bookshop which has just opened within the Waterstones flagship store off Piccadilly provides a good excuse to take a stroll around some London landmarks with historic connections to Russian writers. The best (and almost only) resource on the subject is lecturer, Sarah Young’s excellent website  which has details of a whole series of historical Russians in London. She starts with Peter the Great and there’s even an interactive map to help you navigate the sites.

Radical philosopher Alexander Herzen is a particularly significant figure according to Young because not only did he settle in the capital for more than a decade, from 1852 to 1864, but also because many of his compatriots — Turgenev, Chernyshevsky, Tolstoy, Dostoevsky, Nekrasov, Pavel Annenkov, Vasily Botkin, Vasily Sleptsov — came to London specifically to see him. This list suggests an image of some quite extraordinary parties in Herzen’s Italianate villa, round the back of Paddington. It’s fun (but not always realistic) to imagine these famous names hobnobbing with their British contemporaries: Dickens or Darwin, Trollope or Tennyson. There are certainly some meetings recorded: Leo Tolstoy had a letter of recommendation from Matthew Arnold and he heard a reading by Dickens; Ivan Turgenev hung out with all kinds of people, including Thomas Carlyle (whose house in Chelsea is now a museum) and George Eliot, but much of the detail of these visits has vanished, leaving only intriguing traces.

The lack of evidence about the Russian literary figures visits to London did not stop Victor Lucas writing a big book in 1979 called Tolstoy in London which is full of atmospheric old photos. However it mostly details the prevailing conditions in mid-19th century London and Tolstoy’s life and work in general, with little in the way of concrete facts about his two-week visit to the capital in the spring of 1861.  However, he did have information about Tolstoy’s visit to a school in Chelsea, a fascinating octagonal building, as Lucas describes it: “Its design inspired by that of the Baptistry in Florence”. It contained “eight curtained alcoves, one for each class” radiating from a central stove and it was here that Tolstoy spoke to the boys of Class 3B and asked them to write down what they had done that day. Lucas was so delighted at rediscovering these simple essays (having been all but forgotten in the Yasnaya Polyana archives) that he reproduced them all over 15 pages in his book. They are hardly great literature, but there is a strange poignancy in the idea of these long-dead English schoolboys telling Tolstoy the mundane details of their lives.

The school building is still there today and is now a well-fenced private house called simply “The Octagaon”. To see it, walk up the Fulham Road from Fulham Broadway tube, past Abramovich’s Chelsea Stadium, until you see it on your right, in front of the neo-Gothic school chapel. Other landmarks associated with Tolstoy’s visit are easier to locate. He heard Palmerston give a speech in the House of Commons and became a temporary member of the Athenaeum  on Pall Mall.

The details of Fyodor Dostoevsky’s London visit the following year in 1862 are even hazier, but unpleasant memories from England certainly filtered into his writings; he describes the trip in “Winter Notes on Summer Impressions” bemoaning the crowds and commercialism of Crystal Palace, the prostitution around Haymarket and the dismal drunkenness of Whitechapel.

Dostoevsky’s depiction of Haymarket at night is vivid: he saw “streets lit by jets of gas – something completely unknown in our own country” and “magnificent public houses, all mirrors and gilt”, but was horrified by beaten and neglected children and “shameless cynicism”. Things were no better in impoverished Whitechapel where dismal crowds “like zombies” wander and grow numb and “everyone rushes as fast as he can to drink until he loses consciousness”.

Claire Tomalin’s recent biography of Dickens enthusiastically prints a translation of the letter that Dostoevsky is supposed to have written in 1878 about meeting Dickens’ 16 years earlier. Dickens apparently told Dostoevsky that his own split personality is reflected in the good and evil characters in his novels. Tomalin comments that this remark “must be Dickens most profound statement about his inner life.” As a Russianist, Young is a better judge of provenance and reluctantly concluded that the letter is not genuine. As to what Dostoevsky did do in London, she speculates: “Perhaps he really did spend most of his time prowling round some of the city’s least salubrious areas. It sounds about right”

Ivan Turgenev’s association with England provides some more cheerful and specific encounters. The author of “Fathers and Sons” visited London several times, over more than 30 years, and met a lot of famous people. Thackeray’s house in South Kensington, Carlyle’s on Cheyne Row, and (later) George Eliot’s near Regent’s Park, became some of Turgenev’s regular London haunts. In 1871 he met William Morris at the home of pre-Raphaelite painter, Ford Madox Brown and in 1879 he dined with Henry James at the Reform Club. He seems to have taken in quite a few cultural events too, through the years, from a children’s choir singing ‘Zadok the Priest’ at St Paul’s Cathedral  to a lecture on Russian Folklore at the Royal Institution on Albermale Street.

Whitechapel also has some more constructive Russian literary legacies than Dostoevsky’s description of people as zombies. In the 1880s, the anarchist prince Peter Kropotkin wrote the first issue of the journal, ‘Freedom’, which you can still buy from the Freedom Press and bookshop  on Angel Alley off Whitechapel High Street. The newspaper describes itself as the “UK’s longest-running anarchist publication” and the shop as “Britain’s largest anarchist book shop”. Freedom proudly links its foundation to the moment when “Peter Kropotkin, the best-known figure in the international anarchist movement, was released from prison in France in January 1886” and Charlotte Wilson’s group invited him to come to Britain to join them. Kropotkin’s face, along with Tolstoy’s, Bakunin’s and rows of others, appears on a black and silver mural outside the bookshop.

Poet, philosopher and friend of Dostoevsky’s, Vladimir Solovyov took lodgings on great Russell Street in Bloomsbury; from where he instantly fell in love with the British Museum opposite. It later appeared in one of his philosophical poems; he spent most of his time working there, describing it in a letter as “the best institution in the world”.

Other literary buildings with connections to a fascinating era of radicalism include the library of the Bishopsgate Institute  where the archives of the Freedom Press are housed along with many others relating to socialist history. The library hosts numerous evening lectures, like the “People’s History” on May 23, revealing a half-hidden world of “pamphleteers, agitators, exiles, demonstrations and riots” and looking at “places in which radical ideas have been nurtured and revolutions planned.”

One of these must surely be the Marx Memorial Library in Clerkenwell, where Lenin edited and printed ‘Iskra’ in 1902 and 1903. Visitors can still see Lenin’s office, along with posters, pottery, and a reproduction of Rodchenko’s red and black chess set. Lenin’s time in London is well documented and there are several places associated with him. He lived on Percy Circus near King’s Cross, for instance, liked to walk on Primrose Hill and took a group of visiting Bolsheviks to Highgate Cemetery to see Karl Marx’s tomb.

The Russians are coming back

Of course, because of Lenin, far fewer Russian writers visited London over the following century; but they seem to have been making up for this over the last few years. Indeed next month, a plethora of Russian authors, agents, publishers, translators and readers are expected to gather in Earl’s Court once again for the London Book Fair. All the great names in contemporary Russian fiction will be there from Boris Akunin to Zakhar Prilepin. The Read Russia stand at the London Book Fair continues the traditions of literary cross-fertilization. Academia Rossica are organizing a prize for the best work in translation and have already announced a long list with 37 entries. Some of the authors will be giving talks at the recently opened Russian Bookshop in the flagship Waterstones store on Piccadilly.

With the recent launch of Glagoslav publishers in London, we can expect many more Russian writers to visit London over the next few years as this new independent press is planning to translate and publish up to 35 important works by Russian and Eastern European writers that were previously not available in English.