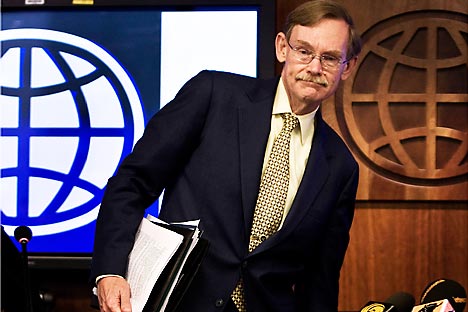 Having failed to secure the IMF chairmanship for their candidate, developing nations have the chance to come back at the 2012 World Bank presidential election.

For the first time in the history of the organization, all three presidential candidates are originally from that group of countries. At the same time, Russian economists are certain that it is time for emerging economies to start thinking about creating their own supranational development institution.

Outgoing WB President Robert Zoellick is set to leave office in late June, and his successor will be elected on 20 April. The World Bank Headquarters noted in a statement: “Zoellick oversaw the bank play a historic role during the global economic crisis.” More than $247 billion was provided to help developing countries boost growth and overcome poverty during his presidency, Russian media said in reports.

Since its inception in 1946, the organization’s head has almost always been American. But there will be only one US candidate this time around. – the Korean-American healthcare expert Dr. Jim Yong Kim, President of Dartmouth College,

The 2010 demarche of the leaders of the developing world enabled emerging economies to increase their presence in the World Bank, although the United States preserved its right to veto. Independent Russian experts remain skeptical about the chances a representative of an emerging economy becoming head the World Bank. “As with the IMF presidential elections, developing nations will nominate their candidates and give their reasons why the ‘people at the helm’ should be replaced in the World Bank. But eventually, as tradition demands, a new American will be appointed chief of the World Bank,” says Vladimir Rozhankovsky, head of research at Nord Capital.

He believes that developing nations should focus on increasing their contingent in the International Monetary Fund. “Regrettably, since they have mostly failed in lobbying their interests in that organization, I have doubts that their nominees for the presidency in the World Bank, “a more distant” organization, will suddenly be successful,” he says.

Yet, emerging economies may seek a different way to increase their influence globally and attain the goals that require financial resources of the kind that can only be provided by organizations similar to the World Bank. To this end, they should create their own supranational development institution. Russian experts believe that such an organization is necessary, as it would allow them to apply supranational incentives and mechanisms to protect national producers.

“The existing institutions and development banks, even those operating under the aegis of the United Nations, were created more than fifty years ago to perform specific functions. Those functions were highly politicized. The voice of each developing country was not loud enough to be heard during decision-making concerning investments or funding,” Ernst & Young Partner Oleg Danilin told RBTH.

In his words, the international donors that currently dominate in the existing development banks have their own vision of investment priorities, while developing nations, specifically India, have another vision, based upon their national interests, both of the projects and sectors that will act as catalysts for economic development and those that require investment.

“Developing countries are showing a higher degree of solidarity in their goals than developed economies. Once they establish a development bank or fund, emerging economies will fill the institutional gap in the infrastructure of investment in development, specifically in technology transfer, where India holds the lead,” says Danilin.

Other experts point to the fact that China may see its influence in the existing supranational financial institutions deepen now that the role of the United States has weakened. In years to come, China will strive for a greater role in the World Bank and the IMF, both openly and covertly. To this end, it will seek support from other leading developing nations, including the other BRICS economies.

Yet, Russian experts are certain that whoever is elected new World Bank chief this year, the time of transformation of the growing economic power of emerging economies will eventually come, but it will take time. Sergey Pyatenko, director general of FBK Economic and Law School, believes the process will take at least a decade.