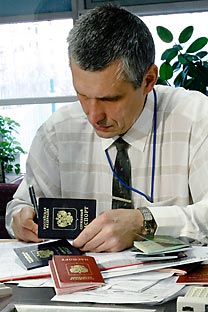 Russia and the European Union are close to finalizing a document that would facilitate the visa regime. Only one obstacle remains – Moscow insists on the exemption from the visa requirement for holders of Russian service passports. Brussels has doubts that such passports are issued only to those who officially require them.

Moscow and Brussels are very close to completing talks over easing the visa regime between Russia and the EU, according to a source in the Russian Foreign Ministry and a diplomatic source in Europe familiar with the negotiations. According to the two diplomats, the deal aims to liberalize the terms for issuing a visa for many categories of citizens. The document introduces three major amendments to the procedures governed by the agreement signed in 2006.

The first change will allow members to civilian air and sea crews to travel without visas. Currently, only holders of diplomatic passports have this privilege.

The agreement also expands the categories of people who are eligible to apply for a five-year-long multiple-entry visa. Under the current agreement, only close family members of EU citizens who are “legally residing in the Russian Federation” can apply for this type of visa, along with members of governments and parliaments and justices on constitutional courts and supreme courts. The new document adds to the category members of official delegations, business people, persons participating in scientific, cultural and sporting activities and exchange programs, journalists and drivers conducting international cargo and passenger transportation services. Sources said that this category will also for the first time include representatives of civil society organizations.

Finally, visa issuance to regular citizens will be simplified. If a person has used a short-term visa and complied with all entry and residence laws, he or she will be entitled to apply for a longer-term multiple-entry visa. Additionally, the parties will abolish consular fees for minors (currently the exemption only applies to children under six years of age) and persons traveling to receive medical treatment (currently this only applies to those requiring urgent medical treatment).

Russia and the EU have, in principle, reached an agreement in on all of these provisions. The Foreign Ministry source said that all of the agencies concerned had agreed with the amendments, and the document would soon be sent to Brussels. “EU representatives need to study the agreement and set a date for the final round of negotiations to adopt the document,” the Russian diplomat said. “We would like to have it signed as soon as possible, say, this May.” The European diplomatic source also confirmed that the amendments might be approved soon, maybe not in May, but “this year.”

However, there still remains one serious unresolved matter: Russia insists that a clause on the exemption of visa requirements for holders of service passports be included in the agreement. According to official figures, there are about 15,000 of them in Russia.

Brussels is skeptical about Moscow’s request. “To obtain a service passport in Russia is much easier than a diplomatic passport, and the same holds for most EU member states. We have doubts that all passports of this kind are issued in compliance with the agreed procedure,” a European diplomatic source said.

Meanwhile, Moscow calls this exemption a “matter of principle.” “We are talking about officials in ministries and agencies engaged in the dialogue with the EU,” a representative in the Foreign Ministry said. “If visas were cancelled for this category of citizens following the abolition of visa requirements for holders of diplomatic passports, it would be a crucial move in the facilitation of the visa regime.” Russian diplomats insist that the EU should be as interested in this amendment as Moscow, as it has about 20,000 holders of service passports, some whom work for the European Commission, whose representatives are involved in the visa negotiations with Russia. Most of them do not have diplomatic passports and will naturally support the initiative of the Russian Federation.

“Both parties are interested in further facilitation of the visa requirements,” said the Foreign Ministry source. “This will establish a good foundation to ultimately resolve those minor disagreements over the abolition of visa requirements for holders of service passports.” He had to admit, though, that should the talks “reach a deadlock, we will have to look for alternatives.” One option is to conclude bilateral accords with selected EU member states on visa-free travel for holders of service passports. Russia already has such agreements with Slovakia, Bulgaria and Hungary. “But this is a last resort measure,” the diplomat said. “We would like to resolve this issue at the European level and in the framework of the new agreement.”