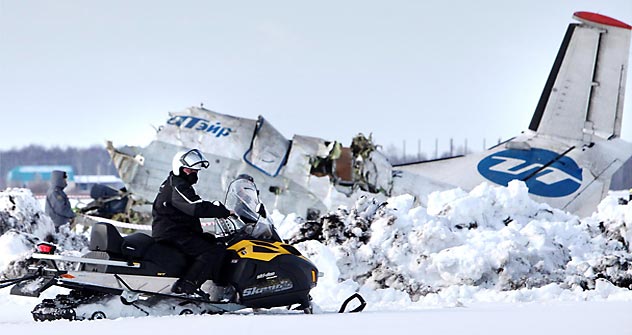 A passenger plane has crashed early Monday morning in Russia's Tyumen region, in Siberia. The country’s Emergencies Ministry says at least 31 people out of the 43 onboard were killed.

At least 31 people were killed after a Russian passenger plane crashed whilst trying to make an emergency landing shortly after take-off near the western Siberian city of Tyumen on Monday (2100 km / 1300 miles east  of Moscow), the emergencies ministry said. All the crew members were among the dead, but twelve survivors were taken to hospital, all in a serious condition. There were no children on board, police said. There were 39 passengers and four crew on board the turboprop ATR-72 airliner which was operated by UTair airline. The aircraft was bound for the oil town of Surgut.  All the bodies were recovered and the plane wreckage is being examined.

UTair said the aircraft was trying to perform an emergency landing when it went down some three kilometers from Tyumen's Roshchino airport. Eyewitnesses said they saw smoke coming from the plane’s twin engines as it plunged to the ground. Air traffic controllers lost radio contact with the ATR-72 aircraft within minutes after take-off, a spokesman for the Federal Air Transport Agency told the PRIME news agency. The airline has three ATR planes made by the French-Italian manufacturer ATR, according to its website.

The captain of the ATR 72 decided not to have the aircraft treated with anti-icing liquid before taking off from Tyumen, Lifenews said, quoting the airport's deputy director, Vladimir Nyesmachny.

“Usually the captain of the aircraft makes the decision, as is his right,” Nyesmachny said. “If he considers that the aircraft needs deicing, specialists are called in. In this case, it was not done,” he said. According to Roshino airport’s standing instructions, aircraft must be deiced if there is any precipitation at the time of take-off.

The flight recorders have been recovered and a team of investigators has flown to the scene from Moscow. A criminal investigation has been launched into the incident. President Dmitry Medvedev has put off a planned meeting with leaders of Russia’s unregistered political parties because of the crash, his spokeswoman said. Deputy Transport Minister Valery Okulov has been appointed head of a government inquiry into the crash.

The plane should have been carrying 40 passengers as one person arrived late for the flight, Tyumen deputy prosecutor Valentin Tarasov said. The crash is Russia's deadliest air accident since a chartered jet crashed on take-off near the central city of Yaroslavl in September last year, wiping out most players from the Lokomotiv Yaroslavl ice hockey team. President Medvedev demanded a drastic cut in the number of domestic airlines following the September disaster and promised to overhaul Russia's aviation industry.

The ATR-72 is a twin-engine turboprop medium-haul passenger airliner. The plane is designed for the medium-distance transport of up to 74 passengers, and is flown by two pilots. Many international airline companies, including American Eagle, Kingfisher Airlines,  JAT, use the  ATR-72 planes for passenger flights.

The crashed plane has been in operation during 20 years. Its first flight was launched on Oct. 20, in 1992 by the Transasia Airways airline company. Until now there have been five air crashes of the ATR planes with people killied as a result of these accidents. The latest one happened in November, 2010, in Cuba.

It is not the first aircrash for UTair. In 2007 the Tu-134 plane, owned by the company, crashed in an airport in the city of Samara and had six people dead. In addition, three helicopters had accidents and killed about 12 people.

Combined report based on the information from  RIA Novosti and Russia Today TV Channel.