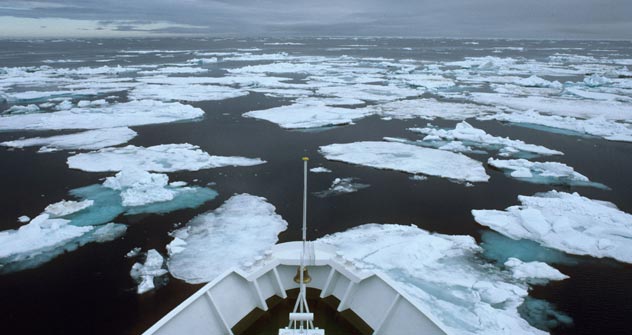 The Cold War for Arctic resources is not just heating up – it’s leading to a growing militarization in the remote North.

That’s the conclusion a study by the Stockholm International Peace Research Institute, which claims that Russia, Canada, Denmark and Norway are all developing their military interests there.

Also, more countries are seeking access to the region’s important natural resources and transport routes, such as “outsiders” like China, India and Brazil.

Vast parts of the Arctic shelf are still disputed territory and Russia, which placed its flag on the Arctic seabed at the North Pole in 2007, has lost several territorial battles for Arctic offshore resources with Norway and the United States already.

Amid the emerging tensions over influence in the Arctic, Russia recently launched a new series of expeditions in the far north. On March 27, the Siberian branch of the Russian Academy of Sciences has unveiled the results of its recent expedition to Yamalo-Nenets and the Kara Sea, reporting that vast reserves of gas have been found in the region.

And by 2015 Russia will create its own special armed forces for the Arctic, aimed at protecting the country’s geopolitical interests there.

“If Russia won’t be exploring the Arctic we will lose it,” said Boris Nikitenko, an academic at the Siberian branch of the Russian Academy of Sciences. “For example, some U.S. parts of the Arctic are much better explored than Russian ones, and the more we wait the less right we will have to be there in future.”

Over the last decade, Russia has kept a tight grip on its hydrocarbon- rich Arctic offshore territory, but the government has recently promised that foreign companies will have access to the region.

President-elect Vladimir Putin has said that, to will speed up the development of the Russian Arctic, 21 billion rubles will be spent on modernization and construction of infrastructure there in the next three years.

He has also promised that nonstate Russian companies would be given access to Arctic oil and gas reserves.

Currently only state-controlled Gazprom and Rosneft have the rights to develop Russia’s strategic offshore reserves. Last year, ExxonMobil agreed to join Rosneft as minority partner in exploring three licenses in Russia’s northern Kara Sea, while Russian-British joint venture TNK-BP has said it plans to invest around $4 billion over the coming three years to develop Arctic oil and gas fields.

Russian companies are demanding better tax breaks to work in the extreme temperatures of the Arctic.

“Some Russian oil companies, like Lukoil for instance, have long been asking to enter the Arctic,” said Yekaterina Rodina, oil and gas analyst at VTB Capital. “This would increase rivalry in the region, though none of them yet has the technology to work in such conditions, so there should be some tax benefits to make a place for the smaller players.”

Experts say that currently no Arctic offshore production is going on, as no long-term state guarantees or tax benefits have been given to reimburse the high costs of offshore development.

“For the last several years no new oilfields have been developed without tax or export benefits and for offshore production it’s even more vital,” Rodina said. “However, in the long-term, exploring in the Arctic is very attractive as research indicates that the current world’s oilfields will be out of reserves in 30 to 50 years.”

Gazprom says it’s ready to go ahead in the Arctic, and is looking at how to make exploration more cost effective with its foreign partners.

“The priority projects in the region are the Shtokman gas field and the Prirazlomny oil field,” a Gazprom spokesman told The Moscow News in an e-mailed answer to questions. “For now, the Shtokman project has all the technical resolutions and plans. To go further with its realization, we need to agree with our partners on cost reduction.”

While the Arctic littoral states are dreaming of vast business opportunities, ecologists and other nations warn of a potential ecological catastrophe.

“The pristine Arctic nature has not been researched yet, and launching any production in the Arctic offshore would kill the natural habitat,” said Alexei Knizhnikov, head of oil and gas ecology at WWF Russia.

The ecology watchdog has recently carried out an ice diving expedition in a Moscow lake as a protest to draw attention to the problem of protecting Arctic ecology.

“For now there is a big technology gap,” Knizhnikov said. “There’s no equipment and infrastructure to remove a massive oil spill in icy conditions, and there are no sanctions on companies in case of an accident. The [tragedy] with the drilling platform Kolskaya showed that we can’t even save people, let alone nature.”

Natural resources officials are in favor of Arctic drilling, however, and say all this talk of a threat to ecology is just politicking.

“The ecologists want to bring us back to the Stone Age,” said Ruslan Bazdyrev, a member of the State Duma Committee for Natural Resources and Ecology. “I’m really skeptical about what they’re doing. In this country, all oil and gas projects undergo proper ecological studies.”

For its part, Gazprom says the company has all the equipment it needs to deal with potential oil spills in the Arctic, and dismisses the idea that an ecological disaster could occur.