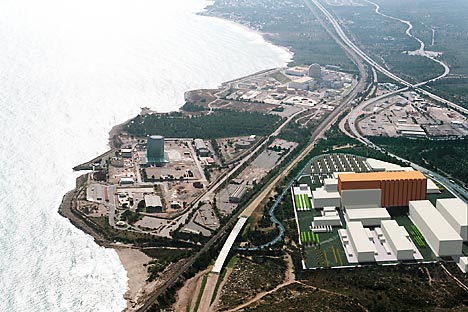 Undated model of the International Thermonuclear Experimental Reactor (ITER) site at Vandellos obtained on Nov. 25, 2003 from the Spanish Ministry of Science and Technology. Vandellos is the proposed Spanish site for the ITER project aiming to produc

Scientists have dreamt of low-temperature thermonuclear fusion for decades. If they succeed, mankind will get a new method of generating power. The fusion plant will require minimum input power while producing more energy than all of the existing nuclear power plants together.

Yet, harnessing thermonuclear fusion is like walking towards the horizon – the goal remains as distant as on the first day of the journey… This analogy, which may disappoint some, was inspired by a conversation I once had with a well-known Russian scientist. Trying to fight off this unwelcome scepticism I recently paid a visit to the Russian Scientific Centre “Kurchatov Institute” to attend a meeting between the Russian team of the thermonuclear mega-project and Osamu Motojima, Director-General of the ITER (International Thermonuclear Experimental Reactor) organisation.

What is the ITER project

The ITER project is a collaborative effort of the states that have set themselves the goal of providing humankind with an inexhaustible source of energy: fusion fuel is about 10 million times more efficient than fossil fuels and 100 times more efficient than uranium fuel. Unlike contemporary nuclear reactors, in which fission reactions produce energy, processes in a thermonuclear reactor are much more complicated because, to produce fusion, the tritium and deuterium must be heated to 150 million ºC. One of the most challenging tasks is to contain the high-temperature plasma. The ITER’s practical task is to confirm the technical feasibility of the solutions underlying the project and their applicability in the construction of industrial fusion power plants.

Mr Motojima headed the Japanese National Institute for Fusion Science (NIFS) before he was appointed director of the international project in July 2010. The scientist said that he had learnt Russian when he was young in order to have a better chance to communicate with Russian specialists. Although most of his ITER presentation in Moscow was in English, Mr Motojima commended the Russian participants and partners, who “are making an invaluable contribution to the overall success of the project.”

“Fusion power is not a distant prospect anymore, but a reachable goal, which we are striving to achieve,” Osamu Motojima said. “The ITER train has gained momentum,” Mr. Motojima said, using the train metaphor to describe the scientific journey. He continued in the “rail” fashion, placing the ITER players in carriages, while he himself took the driver’s seat.

One of the originators of the project, academician Yevgeny Velikhov, who headed the ITER Council for years and arranged the recent meeting in the Kurchatov research centre, shares his counterpart’s opinion. The last two years have, in his words, proved “very hard” for the project, as there were problems with financing, but most of those issues have been resolved, as the European Union has agreed to provide an additional €1.3 billion for 2012 and 2013.

“We can now see clearly the entire road ahead, up to our goal,” Velikhov said. “It is open and clear in terms of money, equipment and organisation.”

ITER is regarded as a technological platform for future thermonuclear power plants. The official participants in the project will gain access to the entire volume of knowledge, which will be generated during the creation of the experimental reactor.

The reactor is 30 metres across. Its most massive parts are 12x8x8-metre conduit blocks (weighing up to 600 tonnes) to confine the plasma. Some of the magnets weigh between 200 and 450 tonnes. To have all of its systems cooled, ITER will require 33,000 cubic metres of water per day. To secure a safe delivery of heavy and large-sized equipment to Cadarache, 96 kilometres of railways connecting the site and the nearest French seaport were reconstructed and strengthened. Furthermore, 26 bridges were expanded and strengthened, and new roads were constructed to bypass existing tunnels.

ITER’s member-states include the EU, Switzerland and six leading economies of the world – China, India, Japan, Russia, South Korea, and the United States. The participants are building the experimental nuclear fusion reactor at Cadarache in France. Many of the units and components of the reactor are created and supplied jointly by several member-states, while separate countries are responsible for selected important work clusters.

Specifically, India is working on the unique ITER cryostat cooling system. There is no contract for the supply of the cooling device yet, but the project administration is certain that the document will be signed in the near future.

Russia’s Ioffe Physical-Technical Institute of the Russian Academy of Sciences has developed and will supply to ITER a one-of-a-kind plasma diagnostics system, under the agreement inked by Osamu Motojima and Anatoly Krasilnikov, head of the Russian ITER Agency.

The new system is to be delivered to ITER in 2016, and the document signed in Moscow opens “a de jure possibility” to begin work on its manufacturing, Krasilnikov said. For his part, the ITER Director-General noted that the timeframe for the delivery indicated in the agreements would not be revised or shifted.

ITER is the first large-scale attempt to generate electricity by manipulating the fusion of the deuterium and tritium hydrogen isotopes. This essentially means reproducing the nuclear reactions that are constantly taking place on the Sun and giving humankind an inexhaustible source of energy.

International consultations and negotiations over this possibility have been underway for more than 20 years now, although the formal intergovernmental agreement on the construction of an experimental power reactor was only signed in 2006. The EU is contributing about 45% of the project cost, while Russia accounts for about one-tenth and is supposed to contribute high-tech equipment instead of money. 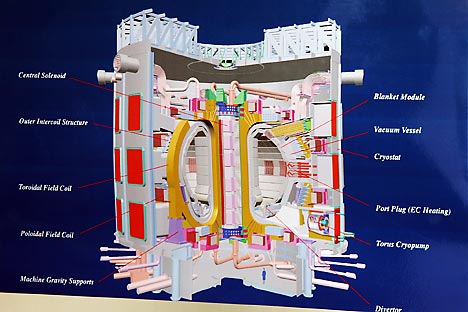 The model of the the international Thermonuclear Experimental Reactor (ITER) is photographed at the Nuclear Energy Center (CEN) of Cadarache near Aix-en-Provence, southern France, Tuesday, June 28, 2005. Source: AP

Construction of the reactor in Cadarache was supposed to be completed in 2016, with the original proposed project cost of €5 billion. The latter figure was eventually doubled, and the experimental facility now costs almost the same as Turkish Akkuyu nuclear power plant (with a combined capacity of over 2,000 MW). This might seem a substantial investment, but could the construction of a standard nuclear power plant affect the budgets of the EU and seven developed nations? These costs are hardly appreciable, provided that the participants share responsibilities and expenditures. But the thing is that ITER is not a standard project, but a scientific experiment that still stirs up disputes in the international scientific community.

And it is no secret that all of these disagreements and problems – scientific, technical and organisational – that inevitably occurred during the project had to be resolved through painstaking negotiations with each participant in the global project. In the majority of cases, the member-states had to meet halfway, Motojima and Velikhov admitted, which means that the ITER train is not an express, but rather a means of transport that calls for the diligence and hard work of all of its passengers under the leadership of the engine driver.

It is precisely for these reasons that ITER construction deadlines, and hence the start of experiments, have been moved. The first plasma will be achieved in 2020, Osamu Motojima said, and the start of the deuterium-tritium operation is scheduled for 2027. Only after the successful completion of these phases will the experimental thermonuclear reactor in Cadarache start generating up to 500 MW of electricity.

A full-scale power plant employing a nuclear fusion reactor will be built in the mid 21st century at the earliest, the ITER administration believes.

4. In-vessel Coils (suppliers are not defined)