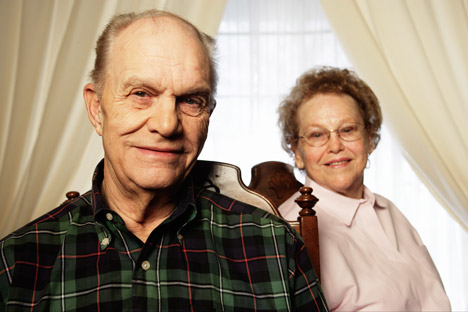 A Russian gerontologist is certain that the normal human life span is 110-120 year.

When Sophia Loren posed for a Pirelli calendar at 71 a few years ago, the remarkable actress must have had no idea that she was going to foment a revolution. She proved that you can look so good even in your seventies that they invite you to be a pin-up for a calendar that is famous for shooting only most stunning beauties.

Russian gerontologist Vladimir Khavinson, who heads the International Association of Gerontology and Geriatrics, is certain that the normal life span of a human being is 110-120 years. This figure was not chosen at random – a French super-centenarian celebrated her 122nd birthday, marking the longest confirmed human life span. The longevity record in Russia is 117 years. As of today, there are 88 people on the planet aged between 110 and 114 and more than 200,000 people who are older than 100. St. Petersburg has 4.6 million residents, 1.2 million of whom are pensioners, including 220 persons aged over 100. Population aging is a global trend. This process should be described as “maturing” rather than aging, though, because age frameworks are being expanded. In the late 19th century, they used to write in novels “an elderly man in his forties walked into the room”, but now this attribute can’t always apply to men in their 60s, or even their 70s. Some are full of vigor even in their 90s – take the prominent Russian playwright Yuri Lyubimov.

How can people make the jump from the average life expectancy in the West of 75-80 years to the top life span of 110-120?

Vladimir Khavinson explains that all organs and tissues have reserve cells, or stem cells. That’s how nature arranged it – for injuries or some other needs. These are “spare parts.” After devastating diseases, such as strokes or heart attacks, your body has a chance to restore its capacity using the spares. These “reserve” cells make up about 30-40 percent of each organ. If all of them are used properly, a person lives to 100-110.

But the thing is that, for most people, these cells fail to work. They are not activated for various reasons – poor living conditions, bad environment, smoking and drinking. We waste the reserves that nature granted us to live longer. However, while we can give up smoking or alcohol, you can never get away from the stress and bad environment of a big city, if that is where you live.

Research into longevity has been underway for a while – they even tried to produce the “elixir of youth” in the Soviet Union. However, research was originally conducted for military purposes, with a view to increasing the body’s resistance to harmful factors, and no one ever thought about extending the life span, says Khavinson, who took part in the research. But all of a sudden it turned out that those agents produced a positive impact on the immune system – specifically, they slowed cancer cell growth. Curiously, not only Soviet scientists, but also their foreign counterparts representing the United States, Italy, the UK, Germany and Spain contributed to the research.

Khavinson maintains that many of the long-livers whom he personally knows take “old age pills” and as a result feel much better and are more active at their age. Russian Academician Vladimir Skulachev also claims that he has developed a powerful anti-oxidant that slows aging processes in the human body. Although there have been no official announcements about the invention of the “elixir of youth,” we see more and more people who fail to conform to the old age stereotype. Famous ballet dancer Maya Plisetskaya danced on stage until the age of 70 – she performed the Dying Swan when she was 68. She still looks 20-25 years younger. Russian figure skaters Oleg Protopopov and Lyudmila Belousova, both in their 70s, continue skating in ice shows, to the delight of their fans. Business magnate and billionaire Warren Buffett, 82, has been reported to be looking for a successor, but those close to the businessman swear that he is in a perfect shape and will stay at the helm of his company for at least five years to come.

There has been lots of discussion about the possible increase in the retirement age, including in Russia. Khavinson believes this move to be indispensible – both for the sake of the country’s economy and as a “fee” for longevity. The number of senior citizens has been growing in the West, and the country that makes the best of its working-age population will benefit the most, because no economy is capable of efficiently maintaining the giant burden of non-working pensioners.

The willingness of senior people to keep working is critical, though. As is known, people tend to stay youthful and vigorous as long as they are interested in their jobs and are sure they generate value. Furthermore, medicine and science are on the verge of making a breakthrough and inventing the “elixir of youth,” which suggests that those in their 20s and 30s should be prepared to live a long life. If they have 20 or 30 active years after they reach the retirement age, maybe they should think sooner about things to do during their free time?

The age records set by Maya Plisetskaya and Sophia Loren may seem unattainable to some, and some would think that these women were born before their time, but maybe those who are ready to feel old at 50 are hopelessly out of touch.