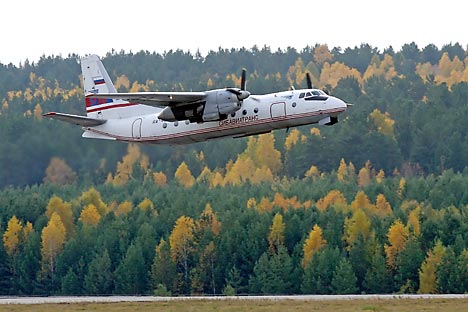 The AN-24 plane is a plane used for transport and regional airlines, which has been in service since the early 1960s.

It was August, 2003 and I was excited about the prospect of being part of a small media contingent that would accompany the governor of the Sakhalin Region to the Northern Kuril Islands to inspect the islands’ preparations for the winter. We were supposed to fly to Petropavlovsk-Kamchatsky and then travel to the islands on an MI-8 helicopter. The governor’s team made some last minute changes to include some officials in the regional administration and dumped all the members of the media except a reporter attached to the official press-service.

My disappointment turned to shock and horror when the reports started coming in that the helicopter carrying Governor Igor Farkhutdinov crashed, killing all 20 people on board. Investigations revealed that the helicopter deviated from the course because an official wanted to show the governor some beautiful vistas between Kamchatka and the Northern Kurils. The crew was forced to take a dangerous manoeuvre to avoid crashing, while flying low in very cloudy conditions, but that didn’t save the 20 people on board.

Whenever I read reports like this about a plane crash in the Tyumen Region, I break into cold sweat thinking of some of the near misses that I experienced while living in Russia. It’s, however, an unfair stereotype that flying in Russia can be an occupational hazard. I haven’t done the math but when you consider the sheer size of the country, the number of daily domestic flights and the distances between places, the percentage of planes crashing in Russia would not be higher than the global average. In many cases, like the crash that killed Farkhutdinov, human error was the culprit behind the tragedy and not a manufacturing defect or even poor maintenance of aircraft.

Given the long flying times in the country, taking to the skies can actually be a great form of entertainment in itself. A large number of Russians tend to be fatalists and bring ‘dark’ humour on board. This has led to many a memorable plane ride.

My personal favourite among the planes being used in Russia is the Antonov-24. This “cute” 44-seater aircraft with turboprop engine is used on shorter journeys. Although it is much slower than Boeing and Airbus aircrafts, I preferred taking an An-24 to cities like Vladivostok and Khabarovsk, on what were usually low-flying and turbulence-free rides.

On my first ever ride on this type of aircraft from Vladivostok to Yuzhno-Sakhalinsk, the passengers and the sole air-hostess put on a show that made up for the lack of in-flight entertainment systems on board. As soon as I got on board, I realised that young air hostess was having a bad day. No “Welcome Aboard” or “Good Evening,” but an angry expression. Obviously the smile of mine that worked wonders on the streets of Russian cities was not going to have the slightest affect on the mood of this young lady.

I stopped wondering what the young lady’s problem in life was when I saw 2 drunken men walk up the aisle and laugh at her in a drunken state. The passengers and the air hostess knew each other as these men were regulars on this route. I was also dragged into this ‘movie’ when the men spotted me. They were astonished to see me on board. “Real Indian?....Bombay, Calcutta?” When I nodded, they imitated the Indian headshake and laughed. These men seemed harmless and I played on, but the air hostess noticed that I was collaborating with her tormentors.

Without the help of a microphone, the air hostess started demonstrating how to use a seat belt and life-jacket, but she was interrupted by the men, who started clapping and sarcastically telling her, “well done, young lady.”  Instead of showing her professionalism and carrying on with the announcement, she dropped the seat belt on an empty seat in disgust and walked away! I wasn’t the only passenger on board who was laughing at the sequence of events.

The men continued to torment the young lady throughout the flight and when she was serving beverages, they pushed her over the limits of tolerance. When asked whether they wanted orange juice or apple juice, one man replied with a counter question on her marital status. The air-hostess poured some apple juice over the man, who stayed quiet for the rest of the flight.

It’s not an easy job being a crew member on some of the longer flights over Russian skies. A flight from Yuzhno-Sakhalinsk to Moscow takes about 9 hours and there almost always tends to be a few bad apples on board that make life difficult for the crew. On one such flight, while waiting to go into the bathroom, I witnessed an argument over extra wine turn into blows with the crew member getting the better of the passenger. Stunned at the turn of events, I watched the “live action,” until the passenger made a hasty retreat.

Despite the drama on board some flights in Russia, flying in the country still tends to be a less stressful experience than in many other parts of the world. Security procedures are strict at the airports but pale in comparison to the paranoia that one witnesses in America or even in India. Of course, when there are communication gaps, any kind of mess can unfold. While in Sakhalin, an Indian expat once told me about his cousin who had trouble with the customs at one of Moscow’s airports. They went through all his bags, prompting him to say that there was no bomb in there. The authorities there just understood/heard the word ‘bomb’ and ended up detaining him for a few hours.

I personally prefer long train journeys across the great Russian landmass but those in Russia on business don’t have the luxury of spending 7 days to get from the Pacific coast to Moscow.  For the movers and shakers of the Asia-Pacific Region, who are planning to visit Vladivostok for this year’s APEC Summit, it’s possible to travel thousands of miles to the west to Moscow and lose just over 2 hours. The time zones make it possible to have a breakfast meeting in Vladivostok and then take a flight at 10:35 am to Moscow, with a flying time of 9 hours and 6 minutes, and still land in the capital in time for lunch at 12:45 pm! How’s that for time management?