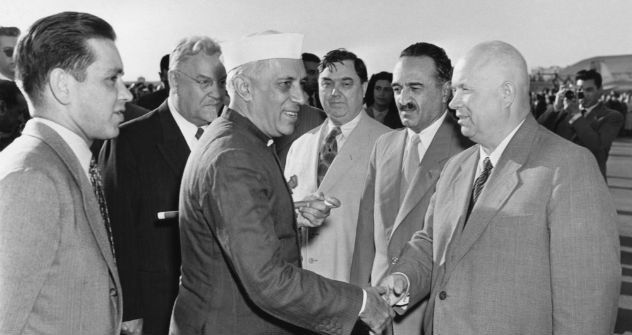 The relations between India and Russia can be marked by the phrase ‘continuity in the midst of change.' I doubt whether this can be said about India’s ties with any other countries.

Even prior to the emergence of the Soviet Union, the legendary letter exchanges between Gandhi and Tolstoy (both apostles of peace and non-violence), the great forays of Nicholas Roerich and later his son Svetoslav Roerich into the Indian landscape (in fact the latter, the son of the former, married to an Indian actress Devika Rani and settled in India), the close links of some of Indian freedom fighters with Soviet leaders, the great Indian revolutionary M. N. Roy’s links with Soviet leadership particularly Lenin are some of the marks in history, which could never be erased while debating the past of India-Russia relations. The great Indian poet Rabindranath Tagore’s love of Russia and the young Jawaharlal Nehru’s (to become the first Prime Minister of India) fascination with the Soviet Marxism could never be erased from India’s collective memory.

Everybody with knowledge of India’s economy and its early growth, howsoever skeptic of Indo-Soviet relations, will recognize that the growth story could have been crippled bereft of Soviet aid and assistance particularly in heavy industries (cases of Durgapur, Bokaro and Bhillai corroborate it), and defence sector. The bipolar politics during the cold war vis-a-vis India’s non-alignment policy did not deter the growth of strong and burgeoning partnership between India and Soviet Union. In the height of the cold war, when South Asia was propelled to be crucible in geopolitical rivalry, Soviet Union played the Good Samaritan to keep India in the winning side. Whether it was wars with Pakistan, or the liberation of Bangladesh, or sending its naval fleet to counter the seventh fleet of the US in the Bay of Bengal, or vetoing the United Nations Security Council resolutions on Kashmir in favour of India, these are the sagas of friendship and cooperation in Indo-Soviet relationship. Starting with the historic visit of Khrushchev and Bulganin to India in 1955 with the signing of the Treaty of Friendship, Cooperation and Peace in 1971 and the bilateral ventures aftermath, the relations were on a higher keel throughout the Soviet period. Whether it was the Tashkent Declaration in 1966, under the aegis of the Soviet Union, or the initiative of Asian Collective Treaty, all these marked a historic cementing of relationship between two great nations.

However, it was in the sphere of culture that the Indo-Soviet relations witnessed its zenith. Thousands of Indian students flocked Soviet Union, under generous grants offered by the Soviet government, to study and develop an empathy with the Soviet Union and its culture. Indian legends like Raj Kapoor were household names in the Soviet Union, with famous songs from his films such as Mein Awara Hoon were rage of the time. In that era one could across names of Soviet children as Indira or Rajiv, while in India one could come across names such as Lenin and Stalin. This cultural bond provided the backbone for strong political and economic relations during the Soviet period.

The collapse of the Soviet Union put the relations in a quandary, at least for initial few years. The new Russia found itself in an uncertain phase in the beginning, and its initial ‘pro-Atlantic’ policy, as vigorously pursued by leaders like Andrei Kozyrev cost heavy for Russia as well as for its relations with traditional partners like India. Whether it is Cryogenic deal controversy, or differences over Rupee-Rouble exchange rate, or shifting priorities of both the countries, the relations were at the lowest ebb in this period. India’s giving up of its traditional quota-license raj and ushering into a market oriented economy, and its tilt towards developed economies such as the US, too impacted the relations. Commentators in both India and Russia lamented the relationship, terming it ‘lost opportunity,’ ‘lost decade,’ and many such other negative epithets.

The visit of Russian President Boris Yeltsin to India in 1993 could be termed a turning point in India-Russia relations. Yeltsin was in the process of giving up ‘pro-Atlantic’ policy in favour of ‘Eurasianist policy’, with focus on ‘near abroad’ and traditional partners like India. Such a policy was well articulated by the prominent Eurasianist Yevgeny Primakov, later vigorously pursued by Yeltsin’s successor Vladimir Putin. By the time Putin came to India in October 2000 to sign the Strategic Partnership documents, many areas of convergence were already emerging. Already in Yeltsin years, the agreements such as the agreement on protecting the interests of multiethnic and pluralistic countries, signed during the visit of Indian Prime Minister Narasimha Rao to Moscow in 1994, had established the base for strengthening the relations. It was Putin who could well articulate the common areas of convergence between the two countries: first, the common stakes in the rise of a multipolar world structure; second, the fight against the rising menace of religious extremism and terrorism; third, economic cooperation in divergent areas including in defence and energy sector; and fourth, common stakes in shaping regional and international affairs. The commonalities among both the countries were reflected in many joint agreements and declarations. To mention a few: inter-governmental cooperation on science and technology; annual summit of heads of states; joint working groups on terrorism, and on Afghanistan;  Moscow Declaration on terrorism; and joint deals on arms sector to develop missiles such as BrahMos.

Hence, it was in 2000 and afterwards, when Putin came to power, that India-Russia relations moved forward. Dmitry Medvedev followed the line developed by Putin. The late 1990s and afterwards witnessed the rise of Russia as a global power with its good performance in economy and its assertiveness in foreign policy. Similarly, Indian economy too emerged a strong one in this period. The bilateral relations shed much of the ideological baggage and found convergence on many other areas. The platforms such as Russia-India-China, Brazil-Russia-India-China-South Africa, and Shanghai Cooperation Organization too promoted the vision of a new world order in which both the countries can play effective roles.

It is true that there are many areas of contention in bilateral relations, but those are the areas which must be worked upon than to be shelved. Perhaps, the 65th year in diplomatic relations provides an opportunity to flesh out differences. Some areas of contention include: the procrastination at operationalization of nuclear reactors in Indian state of Tamil Nadu, the cancel of license of Sistema Shyam TeleServices Ltd. (SSTL), along with other 122 companies, by Indian Supreme Court, Visa issues, etc. While in the case of nuclear plant it is a mixture of domestic politics and international politics that delayed the operation of phase-1 and phase-II, in case of SSTL, it is the Indian law that came to picture. However, the work on both these nuclear sites has already resumed, after the Tamil Nadu government allowed resumption of work on 19 March 2012. Regarding SSTL Prime Minister Singh has assured Russian President Medvedev on the sidelines of the BRICS summit in New Delhi on 29 March 2012 that the issue will be sorted out soon. Currently both the countries are exploring plans to develop hypersonic cruise missile. Another strong area of cooperation is the area of energy. In June 2012, Russia’s Gazprom Global LNG signed a memorandum to supply up to 10 billion cubic metres of LNG to Gas Authority of India Ltd., Gujarat State Petroleum Company and Petronet over 25 years. Similarly, both the countries have made visa rules flexible by allowing multiple entry visas. Other areas of cooperation include jointly developing pipelines such as TAPI, and transport routes such as North-South corridor. In fact, India and Russia have myriad areas to explore by coming out of the ‘rupee-reactor syndrome,’ which puts more emphasis on defence relations. It is time to diversify the relations into various sectors.

At 65, India-Russia partnership is young enough to steer ahead of past compulsions and constraints, and make it comprehensive. The new Presidency of Putin and the UPA-II government under Manmohan Singh will likely witness some historic developments this year, beyond the usual glamour and celebrations.