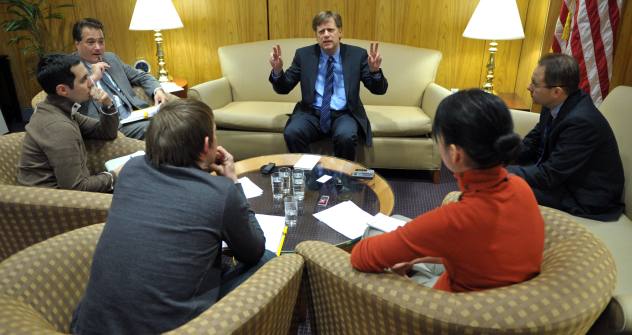 U.S. Ambassador to Russia Michael McFaul is likely to accomplish something none of his predecessors ever dreamed of: he is becoming a household name.  His ascension to the status of celebrity of sorts might be surprising; yet, it’s hardly accidental.

Attention to McFaul’s persona was first drawn last year when U.S. President Barack Obama surprisingly tapped him, a diplomatic novice, to replace seasoned career diplomat John Beyrle as the envoy to Moscow.  By nominating McFaul, the White House was sending a message that the Obama administration was going to pay more attention to the issue of human rights in Russia.  McFaul, one of the leading U.S. experts in “democracy promotion,” was supposed to personify this policy shift.  Characteristically, even sworn enemies of the administration’s Russia policy hailed McFaul’s nomination.

McFaul didn’t disappoint his supporters.  His “democracy promotion” credentials went to work immediately after his arrival in Moscow: In his second day on the job, McFaul invited a group of Russian opposition politicians and civil society activists to the ambassador’s residence, Spaso House.  The meeting was extensively covered by the Russian media.  It appears that hosting social events will become a prominent venue for McFaul to keep himself visible.  Last week, he threw a party featuring a folk band that was flown to Moscow from McFaul’s native Montana.  Images of the ambassador dancing with his wife were promptly made available to the electronic and print media.

In addition, McFaul is working hard to establish his presence in social networks.  His first post (in Russian) on LiveJournal, a popular blogging portal, appeared on the day of his arrival in Russia.  McFaul also opened a Twitter account where he writes both in English and Russian.

At the same time, the ambassador doesn’t forget what he promised during his Senate confirmation hearings: to meet regularly with the Russian opposition.  One such meeting got him in trouble.  Last Thursday, having arrived for a chat with the human rights activist Lev Ponomarev, McFaul was confronted by a group of young people with a camera who introduced themselves as reporters from the state-sponsored NTV station.  According to McFaul, for several minutes, the “crew” had prevented him from entering into the building.

Later, McFaul let his frustration into the open on Twitter.  He complained that the NTV reporters stalked him everywhere he went to and wondered how they knew his schedule.  McFaul even suggested that NTV employees read his emails and listen to his phone.

If someone hoped to treat this story as a benign street encounter, this hope was quashed by the U.S. State Department’s formal complaints to the Russian Foreign Ministry alleging that McFaul’s “security and safety” had been compromised.  Incidentally, this is not for the first time that Russian youngsters – with TV cameras or without – have harassed foreign diplomats, and it’s hard to believe that the Russian authorities weren’t aware of the accidents or couldn’t do anything about it.

Naturally, the NTV officials dismissed McFaul’s charges of eavesdropping and instead attributed their knowledge of the ambassador’s whereabouts to the extensive network of “informants.”  The Russian Public Chamber threw its support behind NTV, arguing that there was nothing wrong with journalists’ desire to “learn more about a public figure – an ambassador, a patriarch or politician.”  A patriarch?  Can anyone imagine an NTV crew constantly following Patriarch Kirill?

Related: McFaul gets final “green light” on his long road to Moscow

McFaul knows Russia well and is aware that “promoting democracy” there is a safe business for a foreign diplomat – as opposed to some other countries where his colleagues can leave the embassy compound only with an escort of armored vehicles.  Yet, having spent the bulk of his professional life in the academic environment, McFaul didn’t learn what other celebrities around the world know all too well: increased public profile comes at the price of reduced privacy and additional security challenges.  It’s time for McFaul to learn this lesson now.

At the same time, one can’t deny McFaul’s remarkable ability to use his current job position to advance future career aspirations.  Once can be sure that for the rest of his life – and certainly during his next Senate confirmation hearings – he’ll carry the NTV encounter as a badge of honor.