“Anahata” with a Russian heart 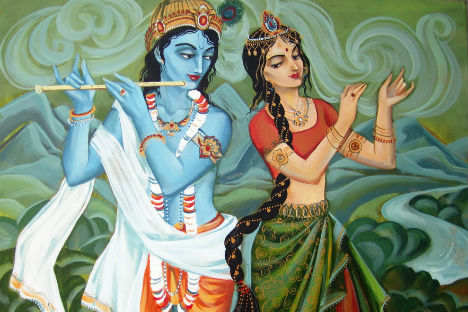 Ekaterina Abramova, a member of Artists Union of Russia showcases her recent works at Russian Centre of Science and Culture, in New Delhi.

Ekaterina Abramova exemplifies her creative vision in a silk saree draped in an unconventional style at the opening of her painting exhibition titled “Anahata with a Russian Heart.” The exhibits are an amalgamation of her Russian roots and Indian influences, hence the title “Anahata” which in Yogic tradition refers to “the heart chakra,” one of the primary whorls of energy in a living being. The collection includes a series of portraits, symbolist works, and still life studies, all done in acrylics on canvas.

Ekaterina graduated from the much celebrated I.E. Repin St. Petersburg State Academic Institute of Art, Sculpture and Architecture in 2007. However her art education began very early in life, through her father Alexander Abramov, who was a wood carver. With confidence in the craft she morphs figures at will, creates distortions, experiments fearlessly with subjects and techniques, and reproduces her beliefs and impressions on canvas with an intensity and measure indicative of young and enthusiastic artists. Art curator and historian, Elizabeth Rogers observes that, “in representing the real, in its direct portrayal of life and nature, as well as in its more symbolic state, she balances the oscillating paradigms of visual art. Her sojourns continue to unfold through her experiments and experiences, opening diverse windows into these different sensorial worlds.”

The artist’s works need to be seen in context of her personal and cultural experiences. She lives in Goa with her family and children for most part of the year and moves to Russia during monsoon. “I love my country, but I also love the life in Goa. In Arambol, where we reside, people from every corner of the world come and stay. They are creative and interesting people – musicians, artists, actors and many famous people. It is a culturally inspiring place and I can focus on my work.” – says Ekaterina. She feels affinity to her Goan neighbours, “I see compassion, humility, piety, and modesty in them. They take care of us and also of our house when we are not here” says Ekaterina. The simplicity of the native Christian women, especially aspects of maternity is depicted in a series of portraits with strong religious annotations. “The Annunciation” is based on the 15th century fresco by Andrei Rublev, the great Russian painter of Orthodox icons. In “The Resurrection," women go to the temple, an angel holds the sun symbolizing the divine light, and palm leaves lean over the believers like a cover of the higher powers. An angel wearing a red robe appears in all portraits, as does the signature in Old Slavonic language of the Psalms of King David.

“I try to convey a sense of God’s presence in everyday life using Orthodox iconography,” says Ekaterina a follower of the Russian Orthodox Church. In abstract works like “Turth” and “Three Worlds” she presents her religious beliefs through symbolist compositions. She also renders paintings of Hindu deities albeit in a romantic style. “Everyone should’ve the freedom to choose and practice a religion and must respect all other religions,” Ekaterina shares her vision. It is this quality of her works which Sudhakar Sharma, Chairman of All India Fine Arts and Crafts Society appreciates, “In these paintings she has expanded her philosophical and artistic talents. The idea of ​​creating a series of iconic paintings that are not insulting to the views of any religion in the world, and call for tolerance and rapprochement deserves attention of spectators and critics. Painting in this case is not only a means of expressing ideas, but also an independent source of energy which the audience feel by the effects of colour, light, and composition.”

Also on display are a few still life paintings, “unlike many other artists I find it an exciting genre. The objects in a still life are always in dialogue with each other and with the audience” explains the artist.

Ekaterina Abramova is a busy woman, painting, organizing art events, and managing a hotel in Goa, she continues to understand and express her mystic self and life in India through a prism of Russian experience.