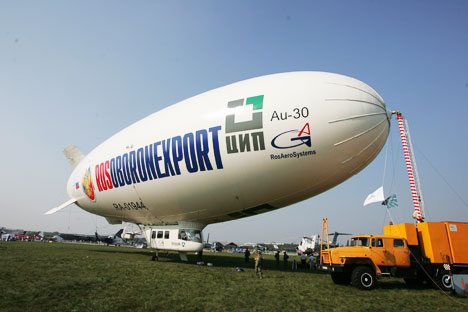 When the official 2011 figures for Russian arms exports were released last month, most analysts and journalists focused, as they usually do, on the fact that it was another record year for deliveries — $13.2 billion, up from $10.4 billion in 2010. That is a significant increase. But the figure reflects the fulfillment of contracts that had been signed in previous years.

Unfortunately, another more subtle indicator of the Russian position on the arms market — the value of its portfolio of current orders — has been largely overlooked. Indeed, orders for Russian arms exports fell last year for the first time since the late 1990s. For example, Rosoboronexport had orders totaling $38.5 billion at the end of 2010, but that figure had fallen to $33 billion to $35 billion by the end of 2011. By contrast, that number had increased for each of the previous 10 years. That means Russian arms dealers had consistently signed deals for more weaponry than domestic manufacturers had produced and delivered to foreign buyers. That upward trend ended in 2011. While $13.2 billion worth of arms were exported in 2011, orders came in totaling, by my estimates, just $7.7 billion to $9.2 billion. That pattern is sure to continue this year as well.

Russia seems set to export $14 billion or more in arms in 2012, making it another record year thanks to the delivery of major naval weapons systems to India. This December, the Indian Navy is scheduled to take delivery of the long-troubled aircraft carrier INS Vikramaditya, which is the refitted and highly modernized upgrade of the former cruiser Admiral Gorshkov. Russia will also supply India this year with two Talwar-class frigates. In addition, Russia is leasing its attack Nerpa nuclear submarine to India, which has renamed it the Chakra II. That vessel sailed to India from Vladivostok earlier this year.

It will be next to impossible for Russia to land a single contract worth $14 billion to maintain its current level of exports. Instead, it must strive to achieve that total by signing two or three major deals, as it did with Algeria and Venezuela in 2006. Considering the lag time between orders and deliveries, we can expect to see Russia's export portfolio shrink in the near future.

The defense industry also suffered other setbacks last year that received a great deal of attention. Russia lost three major tenders, the largest of which was a $20 billion mega-tender for 126 multirole combat aircraft for the Indian Air Force. The Russian MiG-35 was eliminated in the first stage of competition, with the French Dassault Rafale fighter aircraft ultimately winning the tender. Following that, the Indian Air Force chose the U.S. Apache helicopter over the Russian Mi-28N attack helicopter. Finally, Russia suffered a rather humiliating defeat by the South Koreans, who managed to sell Indonesia three obsolete diesel-electric submarines that they manufacture according to the German Type 209 design. The Kilo-class submarines offered by Russia turned out to be too expensive for Indonesia.

Specific reasons are behind each of those failures. India was looking to diversify its arms suppliers and already relied heavily on Russian fighter aircraft. Moreover, the MiG-35 is still in development. The same can be said of the Mi-28N, which is a relatively new helicopter that has difficulty competing with the combat-proven Apache. And certain political, industrial and technological ties between Indonesia and South Korea played a role in that tender. But taken together, all three cases point to Russia's systemic and growing problem in peddling its arms abroad.

As major negative factors, some of the markets in which Russia has traditionally been strong are now saturated, and some of its clients have limited buying power. The Chinese, and to a lesser extent Indian, markets are now largely saturated. Those countries have purchased a combined 530 Su-27/30 fighter aircraft of various modifications over the past 20 years, and will obviously not be buying the same number of fourth-generation aircraft again. Venezuela would like to make large-scale arms purchases but cannot due to economic difficulties. Besides, the political risk in that market is extremely high. Last but not least, Russia lost finalized arms contracts worth 1.3 billion euros ($1.7 billion) as a result of the Libyan revolution and another 3.2 billion euros in contracts that were in the preparation stage. Finally, now that President Dmitry Medvedev has joined the embargo against Iran, Russia has lost what I estimate to be another $1 billion annually in potential weapons sales to that country.

What's more, Russia's best-selling arms of the last decade are becoming obsolete, while the next generation of weapons are either still in development or the military itself is blocking their export so as to have priority in purchasing them. For example, demand has nearly dried up for the Su-30MK, the driving force behind Russian arms exports for the last 12 years. With plans to purchase another 42 Su-30MKI, India is probably the only country that will place a major order for this type of aircraft. Meanwhile, at least another three to four years are needed to complete development of the modern Su-35. The same is true of conventional submarines. And although some demand remains for the excellent Kilo-class submarine with its powerful array of missiles, even that craft is starting to look archaic in comparison to new German models on the market. As for the highly sought-after new-generation S-400 air defense system, the Russian Defense Ministry will purchase all the units produced through 2015, only after which date will export become possible. In the field of air transportation, Russia will have nothing to offer until it begins mass production of its Il-476 in Ulyanovsk in about five years. As a result, Russia will experience a cyclical pause in exports owing to its lack of competitive products.

At the same time, the Russian defense industry has not suffered as result of the decline in exports because state defense orders have risen by an estimated 300 percent annually. In fact, some companies will have to produce at several times their current levels to meet the demand of the government's program to fully modernize the military by 2020. The same aircraft manufacturers that have seen sharp declines in export orders have received state contracts for 92 Sukhoi Su-34 attack aircraft, 30 Sukhoi Su-30SM fighter aircraft and 24 carrier-based MiG-29K jet fighters. The export business that sustained the Russian defense industry throughout the post-Soviet period is being replaced by a more traditional business model in which the national armed forces are the primary buyer.