A Russian who discovered the Titanic 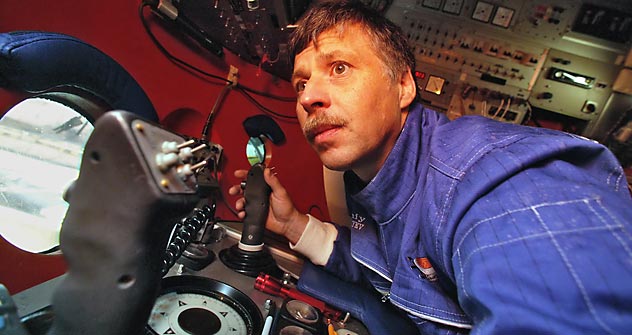 Evgeny Chernayev completed more than 30 expeditions to the wreck during the mid-1990s. Source: ITAR-TASS

April 15 marks the 100th anniversary of the sinking of the RMS Titanic. Today the wreckage is being explored by Russian deep-sea researchers.

For 100 years, the rusty wreckage of the fabled luxury ship has been lying on the bottom of the sea. Now, thanks to Russian technology, we know what it looks like down there.

Evgeny Chernyaev is very much the picture of a distinguished “hero of Russia”: a man with stony features, upright posture, gray streaks in his mustache, and with a large Russian flag emblazoned on his jacket sleeve. But all that changes when he dives into a sea of thought – or the world of the deep.

When he begins to talk about his adventures under the sea, the face of the 57-year-old takes on a boyish appearance as the words pour forth. Chernyaev tells of bronze lamps that still shine after decades under the ocean, bottles that are still corked, and ornately carved wooden columns. he is speaking of the ship that has captured the imagination and enthusiasm of people like no other ship in history: the Titanic. April 15 marks the centenary of its tragic sinking. Probably nobody else knows the wreckage, lying on the bottom of the Atlantic Ocean nearly 12,500 feet below the surface of the sea, as well as Chernyaev.

As the pilot of the Russian research submersible Mir 2, Chernyaev has made eight expeditions to the Titanic, for a total of about 1,000 hours of diving time. Chernyaev says he never dreamed of playing a role in the history of the Titanic; but he happened to be in the right place at the right time.

It was not long after the fall of the Iron Curtain that the Russians and the Americans made their first joint expedition to the Titanic. The wreckage was discovered in the fall of 1985 by American deep-sea archaeologist Robert Ballard. Two years later, the Finnish company Rauma-Repola delivered to Russia the research subs Mir 1 and Mir 2, which had been developed at the Shirshov Institute of Oceanology in Moscow. It just so happened that at the same time the Canadian IMAX film corporation was searching for a suitable vehicle for filming a documentary called “Titanica.”

The Fate of the Mstislav Keldysh

With his 1997 film “Titanic,” James Cameron brought back the memory of the tragic sinking of the RMS Titanic, which is now being released in a 3D version. To conduct the underwater filming, the director chose a Russian research vessel called the Akademik Mstislav Keldysh. “We never could have made the film without the ‘Keldysh’ people and the Mir sub,” Cameron said at the Russian premiere in Kaliningrad, where the ship is anchored. That was 15 years ago. Today, the situation for the Keldysh is more precarious. “1,500 euros per day in port fees?” says Robert Nigmatullin, the director of the Shirshov Institute of Oceanology, “We can’t afford that for very long.” To help the finance costs, the research vessel is now also available for commercial voyages. “It’s really a shame,” said Mir pilot Evgeny Chernayev

Although other vessels from other countries were also capable of diving that deep, none of them met the filmmakers’ requirements as well as the Mir. Along with offering sufficient space for the camera and divers, the Mir also had an extra-large porthole, which made filming easier. When director Stephen Low asked Evgeny Chernyaev how much energy and light the small submersible could provide, Chernyaev’s answer was to the point: “You’ll get as much light as you need.”

On May 10, 1991 the Russian research vessel Akademic Mstislav Keldysh set out to sea from Kaliningrad. On board were the two Mirs and an international crew, among them Chernyaev.

The situation in Russia and at the Shirshov Institute was not exactly rosy in 1991. The country was in a state of upheaval and the economy had collapsed. Under such circumstances, the sea researchers were worried about mere survival; they couldn’t begin to think about the future. The pilots of the Mir had almost no experience with expeditions at this depth, and the weather over the Atlantic was looking unfavorable.

Yet any storms were all but forgotten when the two Mir boats finally reached the wreckage of the Titanic for the first time. Chernyaev, who was forced to share his small seat with the IMAX camera and two members of the camera crew, had to contort his body to even reach the steering wheel. He had seen numerous wreckages before and after the Titanic. He has seen the “Bismarck” and has dived to the ocean bottom at the North Pole. But even more than 20 years later, the recollection of seeing the skeleton of the Titanic suddenly appearing out of the dark still leaves him speechless. His mind fills with a flood of thoughts that he can hardly put into words. He says he thought how this massive ship must have flown over the ocean, of the courageous men and women who worked on board, and of the tragedy of its sinking. Chernyaev could see rusty railings, silver coins, and perfectly intact dinnerware. “Water is my element, and every expedition is like a fairy tale.” The tale of the Titanic is his favorite.

Perhaps it was a happy ending to the story that only a few years later, American director James Cameron set out with the crews of the two Mirs to shoot the film classic “Titanic.” The crew spent up to 18 hours under water; the descent and ascent alone took five hours to complete. Again and again the director wanted to repeat the complex tracking shots for a second or third time. Each dive was first rehearsed down to the millimeter on a model contained in a tent on the deck of the Keldysh. To simulate the murky waters, the tent was filled with smoke.

“Cameron wanted the best technology, the best team, and the best subs,” said Chernyaev. It also helped that the technically astute Cameron had long been fascinated by the underwater world. “He’s like an engineer – he understands everything.”

Even later Cameron remained devoted to the Russian deep-sea world. In 2010 he went on an expedition with Mir 1 to the floor of Lake Baikal. His most recent expedition, just a few days ago, took him to the deepest part of the ocean, the Marianna Trench – 50 years after the Swiss researcher Jacques Piccard was there for the last time. The Russian premiere of Cameron’s “Titanic” took place in Kaliningrad, the home port of the Akademik Mstislav Keldysh. Evgeny Chernayev thoroughly enjoyed the film.