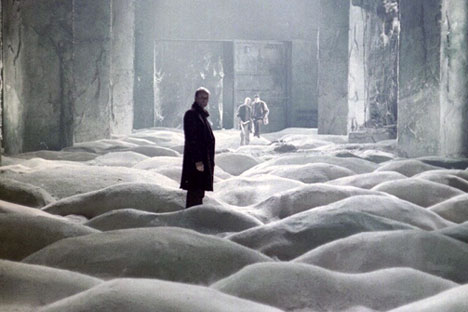 The footage from "The Stalker." Source: Konopoisk.ru

Moviegoers often have no idea how much pain and effort a single scene can take. Here, some insight into the most incredible shots from Andrei Tarkovsky’s films.

1) It took a very long time to choose the location for “Stalker.” Some scenes were shot in Mosfilm’s studios, and then the film crew went to Isfara, Tajikistan. The landscape there looked like the moon, but then Isfara was hit by a major earthquake that claimed many lives, destroyed the town and ruined the landscape that had been chosen for the film. In addition, because the locals who had lost their homes were lodged in hotels, the crew could not find accommodations and had to look for a new place to shoot the movie. They searched for a new location in Central Asia, Azerbaijan and the Crimea, but found nothing. After that, the crew went to Zaporozhye, Ukraine, and came across an open pit near a foundry, with smoking ash heaps and streaks of metals in a rainbow of colors. That seemed a perfect set for a science fiction film, but the crew was told that the site was so polluted that it was unbelievably dangerous to work there. The crew had to continue their search in regions near Moscow. Tarkovsky was unable to take part in most of the search personally, as he had lots of other work. Finally, they found a location in Estonia at a derelict youth camp and adjacent power plant.

Related: Andrei Tarkovsky: The filmmaker who saw an angel

2) One of the scenes in “Stalker” was shot inside the power plant. When the filmmakers developed the film, they felt that there was not enough tension in the shot. They thought that the exposure settings were wrong, so they replaced the cameraman and shot it again, but the scene was still all wrong. They employed a wider-angle lens, but Tarkovsky again did not like the result. Then he said: “I know what’s happening. We need to shoot with a long-focus lens and from a different angle, so that the camera can move back.” But there was no moving it back, as it was standing against the wall. How could it move back, when there were walls around? There was no place to light from, either. Then the director himself, screenwriter Evgeny Tsymbal and production designer Dmitry Berdzenishvili started breaking through the two-meter wall. They managed to make a gap two days later, with bleeding hands. Sadly, their efforts were all in vain – Tarkovsky thought that the scene was still not good enough and they would have to build a studio set to reshoot it.

3) All “Stalker” takes were shot several times, often six or seven times. “We had to pull down all the yellow leaves in the forest so that the new takes had the same colors as the material shot previously. They waited for the frost to melt in the morning, because everything was bluish and sparkling in the sun. The maples were first yellow, then pink, then red and finally purple. We had to pull down all those leaves and leave the green ones only. We thinned the forest,” Evgeny Tsymbal remembered.

Tarkovsky’s assistant Marianna Chugunova said: “On the meadow where we picked all the yellow flowers in the spring, we had to transplant grass several times, because there was low lying ground there, and the grass froze at night and turned yellow from the frost. We continued shooting the following year, when new grass had grown, and suddenly blue flowers appeared, and we had to pick them all, too.”

4) “During the very long ‘Ride on a Railcar’ take, the camera first focused close up on the actor’s face and then worked to a middle shot, then focused on another actor, then took a wide shot to finally zoom into a close up on a third actor. I asked Tarkovsky why he was doing that. He said he wanted ‘several layers of information in a single shot,’” said Evgeny Tsymbal.

To achieve this effect in, say, “The Mirror,” the image needed to stay sharp both in the foreground and middle ground. Tarkovsky called this technique “a focus on infinity.”

5) When shooting “The Sacrifice,” Tarkovsky decided to christen the production by breaking a bottle of champagne, as tradition calls for, but the bottle did not break. That bottle became a bad omen for the entire production of this stressful and mystical picture. The crew had thoroughly prepared for the fire scene. A whole house was to be burned to the ground – it had taken five months to build the set, and it seemed ready for anything. The building had moving walls, and you could plan the takes any way you wanted. Large amounts of explosives and cables were placed around the house to set it on fire just as planned. Everything worked perfectly, except for the camera. Tarkovsky almost lost it. There was a spare camera shooting the fire, and there was a chance of combining the shots, but for Tarkovsky it was a disaster – he had already designed the entire scene differently. The crew had to build a new house for him using scrap materials.

6) Tarkovsky had long been working on a scene in “The Mirror,” in which the Pedestrian (Anatoly Solonitsyn) walked in a field. They had sowed buckwheat on the field especially for the film. Margarita Terekhova, who played the lead female role, recalled later: “Tarkovsky needed buckwheat, but the local state farm specialist told him that buckwheat never grew there. He insisted on it, and the buckwheat did grow. They said later that the farm (Tuchkovo, near Moscow) started cultivating buckwheat after the movie was completed.”