The importance of being Russia 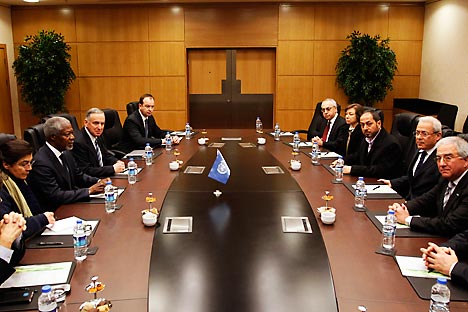 It has been a long time since I was as acutely aware of Russia’s importance as during the recent conference on the Syrian crisis in Ankara. The conference participants, mostly delegates from Turkey, the Syrian opposition and several regional countries, said that everything depends on Russia, which alone can tip the scales. They said that if not for Russia’s veto in the UN Security Council and military assistance to Bashar Assad, the country would have a new regime and would be democratizing by now. They said it again and again, closing their ears to Russia’s arguments about other circumstances that may be more important and painful.

Representatives of the opposition and the majority of Turkish experts said, often quite convincingly, that the Syrian government could fall any day. However, belief in Assad’s imminent fall has diminished in the past two months. What is the reason for the relative stability of the Syrian regime, which has withstood the impact of the Arab Spring for over a year?

First, there is a large group of people in Syria who stand to lose from a revolution. According to Russian experts, only 15 to 20 percent of Syrians firmly support Assad but a third of the population, comprising of influential minorities, Christians (including Armenians), Kurds, Druze and Ismailis fear that any change would only worsen their lives and that the overthrow of the Alawis would bring Sunnis to power who would start persecuting them all. This is why the Syrian population is split in two, creating conditions for a protracted civil war and allowing the government to claim that they have popular support. The opposition claims that the minorities are gradually shifting towards it but there are no facts to prove this.

Second, the military balance is not in favor of the opposition; the fall of Homs was a major victory for Assad, changing the international view of events in Syria and quelling speculation about Assad’s imminent defeat.

Third, the regional context is favorable to Assad. The Libyan operation, which was hailed as a NATO success, has dampened arguments for military intervention. On the one hand, European countries, which bore the brunt of the conflict in Libya, have used a considerable part of their military potential. On the other hand, the rise of Islamic parties in the wake of the Arab Spring has increased Western doubts about actively supporting the opposition. Although the recent meeting of the Friends of Syria group of Western and Arab nations sought to bolster the opposition, the West is not eager to expedite the delivery of weapons.

Fourth, Gaddafi’s Libya had no friends because it had harmed neighboring and more distant countries too much, but Assad’s Syria can expect support from Iran, Russia and China and at least silent neutrality from neighboring countries ranging from Iraq to Jordan, which dislike the idea of an all-out war so close to home.

And lastly, after the UN Security Council adopted a resolution that ultimately led to the invasion of Libya, Russia and China have refused to support any document if it leaves the window open even a crack for military intervention. They say that NATO and other participants in the Libyan operation took advantage of the resolution to overthrow Gaddafi.

Russia has never been criticized so sharply as in the case of Syria. For its support of the Syrian regime, Russia has been accused of complicity in mass murder and a desire to profit from arms deals. Less emotional people wonder why Russia is supporting a doomed regime instead of diversifying its ties and building bridges into the future. Yet Moscow continues to stand its ground, disregarding the possibility of its own isolation.

The game is far from over and Russia has not lost the latest round. Of course, business with Syria cannot be carried on as before because Assad will be pressured to step down, although the conditions of his departure may differ. Those who will replace him will not favor ties with Russia anyway, as the Libyan experience has shown. Russia played the key role in the overthrow of Gaddafi as its veto could have prevented the intervention and hence the revolution. And yet, the first thing the new authorities did is refuse to honor contracts with Russia.

Moscow is not trying to preserve its Syrian contracts but to reaffirm its status in international affairs. By resisting powerful psychological and diplomatic pressure, Russia has shown that although it has lost ground in the Middle East (Syria is its last close partner in the region), it is still a power whose opinion cannot be disregarded. Russian diplomats have clearly said that it will not allow intervention to be legalized through the UN Security Council. No country has so far risked acting without a UN mandate in Syria, even though the opposition is urging them on, as the Iraqi example is still fresh in their memory. As a result, the Arab League and the West have launched dialogue with Russia, which they condemned only the day before. Kofi Annan’s plan and the UN Security Council’s statement in its support were mostly brought about by Russia’s firm stance.

But Russia’s possibilities are not unlimited; it can hardly achieve much more. As for Annan’s plan, it should have been enacted a year or six months ago at the latest. The sides have likely reached the point of no return, as too much blood has been shed to hope for compromise. Besides, talks cannot be held with unconsolidated opposition groups.

Russia must decide what it will do if violence in Syria erupts with fresh force. Supporting the Syrian government may be logical but there is a limit, after which Russia should think about selling its critical vote in the Security Council to the highest bidder since the Syrian opposition and their allies put so much stock in it.

Fyodor Lukyanov is Editor-in-Chief of the Russia in Global Affairs journal. He is also a frequent commentator on international affairs and contributes to various media in the United States, Europe and China, including academic journals Social Research, Europe-Asia Studies, Columbia Journal of International Affairs. Mr. Lukyanov is a senior member of the Council on Foreign and Defense Policy and a member of the Presidential Council on Human Rights and Civic Society Institutions. He holds a degree from Moscow State University.