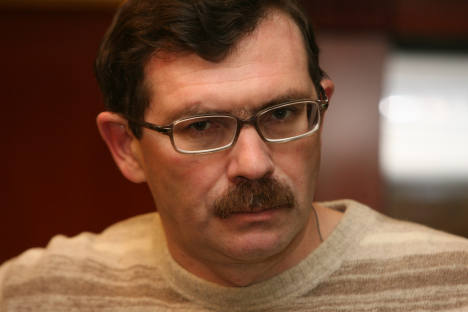 Doug Lawrence: Many Russian friends were turned-off Tolstoy after being forced to read him at school, is there a right age for "War and Peace" or "Anna Karenina"?

Pavel Basinsky: If anyone is bored with Leo Tolstoy, I’m afraid that’s his problem. I don’t know the exact age at which one should start on War and Peace or Anna Karenina, though. In the 19th century, every serious grammar school student read War and Peace. It’s true that times have changed. But I still believe that without these two novels, you cannot claim to be educated – or at least an educated Russian.

@von Apfelstrudel: How would you summarize "War and Peace" in three tweets?

Pavel Basinsky: 1) A book about what war is in general; 2) A book that says love rules the world; 3) A book that shows how easy it is for evil people to unite, and how difficult it is for good people, which is a bad thing.

Louise Whitworth: Why, late in his life, did Tolstoy disown "War and Peace," and was even ashamed of the novel? After all, it is internationally recognized as one of his best works, and one of the best works in Russian literature as a whole.

Pavel Basinsky: Yes, Tolstoy really grew ashamed of having written "War and Peace" and "Anna Karenina." This resulted from the "spiritual breakthrough," when Tolstoy disowned all his earlier works for the sake of his new religious convictions. The same thing actually happened to Gogol at the end of his life, when he disowned Dead Souls and The Government Inspector. To Tolstoy, the change came in his prime, when he had just turned 50 and was physically and mentally able. This is a very specific and very Russian fate: Russians are known for burning bridges, suddenly renouncing everything they did before. We can see that in our history as well: first in 1917, then again in 1991. It’s a bad thing for society, but it is always interesting if it’s a turn in one’s personal life.

Natalia Antonova, Deputy Editor in Chief of The Moscow News: Tolstoy's conflict with the church might be an interesting topic to consider - especially since so many people seem to be having conflicts with the church as of late.

Pavel Basinsky: Tolstoy had a very complicated conflict with the church. I am currently writing a new book on it. In a nutshell, Tolstoy rejected the church all together as a posterior growth on genuine Christianity, on the teachings of Christ, whom he regarded as a prophet and teacher born of his mother Mary in marriage with her husband Joseph, rather than as God. Accordingly, he denied Mary’s virginity and Immaculate Conception, the Resurrection. That is, he actually challenged all the teachings and sacraments of the church, which brought him into conflict not only with the church, but also with the government since Orthodoxy was the state’s official religion. Up until 1905, when the tsar issued a manifesto granting the freedom of conscience and press, none of Tolstoy’s religious works had been published in Russia. They had been rigorously banned by censors. They were nevertheless published in Russian in Great Britain and Switzerland, and then carried illegally into Russia. People caught disseminating them were thrown in jail or exiled to Siberia, like Tolstoy’s secretary Nikolai Gusev. But Tolstoy himself was left intact because of his great international fame and influence. This policy was masterminded by [Konstantin] Pobedonostsev, the most powerful figure after the emperor. The fact that his works could not be published in Russia and that people who professed his views were persecuted while he himself was allowed to live peacefully on his Yasnaya Polyana estate, deeply depressed Tolstoy. This was the reason for his resentment of the church, which manifested in his essay On Clergy and some pages of his novel Resurrection, in which he mockingly described the Holy Communion (Eucharist).

These two works were the last straw, and the Holy Synod issued a ruling that said Tolstoy could no longer be considered Orthodox. It was actually true, Tolstoy could hardly be defined as Orthodox, but in those times, the officially published excommunication declared Tolstoy persona non grata in an Orthodox state. His convictions prevented him from adopting Islam or Judaism, and no one could officially be an atheist in Russia at that point. The excommunication had no legal effect on Tolstoy either, but the situation was in any event dicey. Society was split in two: those who accepted the ruling and labeled Tolstoy an enemy of Christianity and hence their personal enemy, and those who denied it, with quite a few clergymen in the latter group. As a result, Tolstoy’s conflict with the church prompted a rift in society, which expedited the revolution.

I wouldn’t compare this conflict to the history of Pussy Riot, as some already do. But the blasphemies with which Tolstoy treated the church in his essays were pretty egregious at the time. More important, however, is the coincidence that society now is splitting up once again, which is dangerous for Russia.

Phil Hitchcock: Who will be the 21st century Tolstoy?

Max Monastyrev: How does Tolstoy explain our violent but short existence in this universe?

Pavel Basinsky: He put that down to a single obstacle – a lack of faith. A man who believes in God is a happy man. In this case, life is a short period between one eternity (before birth) and the next one (after death). Therefore, according to Tolstoy, death is merely an awakening to eternity.

Pavel Basinsky: As far as I know, Tolstoy didn’t have a favorite book. He used to read The New Testament over and over, and he admired Pascal. Of the Russian writers, he preferred Pushkin and Gogol, and Stendhal and Dickens were among his favorite foreign authors.

Vsevolod Pulya: I wonder why the book is named “Flight from Paradise”? What is behind this title?

Pavel Basinsky: Paradise is a metaphor that consists of the Yasnaya Polyana estate and Tolstoy’s family. This metaphor is fairly ironic since at the end of his days, Tolstoy wrote: “In this house, I am being boiled like in hell.” However, his best and most productive years are also associated with Yasnaya Polyana: he wrote his major works there. Actually, I always yearned to know the reason why he fled the “paradise.”

Ivan Shtref: Is it true that Tolstoy had many illegitimate children? Did any of them become writers?

Pavel Basinsky: We can only say with certainty that Tolstoy had one illegitimate child – a son by a married peasant woman, Aksinya Bazykina, born before his marriage to Sofia Andreyevna (once married, he remained faithful to his wife). The son lived at Yasnaya Polyana, was even the village prefect for a while, then served as coachman for Tolstoy’s older sons, but later drank himself to death. Unfortunately, this was the usual fate for illegitimate children of aristocracy. They saw themselves as superior to their environment (what with their noble fathers), but had to remain where they were born for there was no way to legitimize illegitimate children. Russia was an Orthodox – not a secular – state, where only children born after a church wedding, christened and entered into a special church book could be considered legitimate. So Tolstoy’s son could not have become his legitimate offspring even if his father wanted him to. Furthermore, Aksinya had a husband, and Tolstoy’s wife Sofia was a very jealous woman.

Antonio Andreotti: I would like to know whether you believe, like I do, that The Kreutzer Sonata is one of Tolstoy’s best works, and if yes, why do you think so? If not, I would also like to know the reason why.

Pavel Basinsky: The Kreutzer Sonata is undoubtedly one of Tolstoy’s best masterpieces. It is a different story in that it is also very frightening in its destructive force, not entirely characteristic of Tolstoy. I would put it on par with another – no less frightening – story of his, The Devil. Together, they make for sort of a dilogy on sexual love. Tolstoy was an exemplary family man, and he had 13 children with Sofia, but he nevertheless always considered sexual intercourse a mysterious and dreadful act. In his diary, he compared sex to a ‘corpse,’ meaning that a man ‘died’ momentarily during it. He built upon this metaphor in The Kreutzer Sonata: sexual desire leads to jealousy, and jealousy, in turn, results in a murder, a corpse. Meanwhile, in this novella, he also gives a very interesting interpretation of how music influences man. This influence is irrational, beyond reason, and Tolstoy was frightened of anything beyond reason.