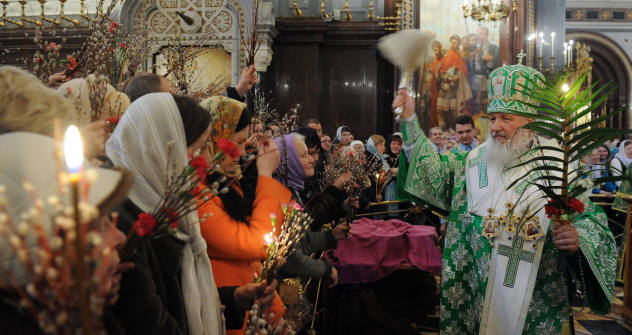 Unlike the Western Christian world, the Russian Orthodox Church will celebrate Easter next Sunday. Preparing for it requires the proper fulfillment of certain customs -many of them religious, but more of them from folk traditions.

While Christmas is the biggest holiday in the West, celebrated on a grand scale by both believers and non-believers, Russian Orthodox tradition considers Easter the main event of the liturgical year. It is the most important religious holiday in the country and the third most widely observed holiday in Russia overall, after New Year's and birthdays, according to a 2003 poll conducted by the Public Opinion Foundation.

In fact, for the vast majority of Russians, celebrating Easter is not so much a question of faith as it is one of national identity. Preparing for it requires the proper fulfillment of certain customs -many of them religious, but more of them from folk traditions.

It is customary to thoroughly clean the house on the Thursday preceding Easter Sunday. On "Clean Thursday," as it known, everyone cleans their homes, even those who only do it once a year. The next morning, many houses are filled with smell of dough, already rising so it will be ready to go into the oven late in the evening. The dough is for kulichi - tall cylindrical Easter cakes. Another tradition is dyeing eggs. Many people still gather onion peels for the process long before the first full moon in spring, which, along with some other factors, determines the date of Orthodox Easter each year. They might not know why Russians dye eggs for Easter, but they know exactly how many peels are needed and how long to boil the eggs to get them the right shade of bright red.

The results of a public survey on Easter celebrations conducted by the Levada Center in 2006 looks more like a marketing study for egg producing factories than research on religious habits. It revealed that 84 percent of Russians would celebrate the event by coloring eggs and baking kulichi. A total of 53 million eggs are usually sold in the capital on the week before Easter, and around 650 to 700 tons of kulichi are produced by Moscow bakeries, according to data from the the Department of Consumer Marketing and Services.

According to Christian tradition, the egg is a symbol of new life, and that it must be red because it is the color of the blood that Christ shed to atone for the sins of the world. Easter eggs and kulichi are taken to the church on Saturday morning to be blessed.

All this cooking is a bit of a challenge since it is not allowed to taste the food. Great Lent, the 40-day fasting period before Easter during which devout Orthodox believers give up sugar, meat and dairy products, will only be over early Sunday morning after the Easter mass. Fasting for Lent is a religious custom followed less widely than the folk tradition of dyeing Easter eggs.

Among the 71 percent of individuals who called themselves Orthodox Christians, as few as 2 percent observe Lent strictly, 20 percent observe it "more or less," and 80 percent just ignore it, according to Levada Center research. Going to the special Easter mass to celebrate Christ's resurrection from the dead is also not very popular. Less than 300,000 Muscovites visited the city's churches for the Easter mass in 2011. For a city with a population of more than 10 million, this is not very many.

The church service on Easter is over at approximately 3 a.m, when the priest finally proclaims, "Khristos voskrese!" (The Lord is risen!) and the crowd responds in unison three times "Voistinu voskrese!" (Truly he is risen!). It is the most joyful moment in the Orthodox church year, which is often filled with gloom. So it is no wonder that people greet each other with kissing. Finally, some eggs and kulich are allowed since the first foods eaten after the fast should be consecrated ones.

On Sunday the real feast begins at a table overflowing with food. Although the variety of foods may vary, all Russian Easter tables have paskha, a traditional sweet dessert made from curds and shaped like a pyramid, and kulichi. Those who had been fasting for so long now can eat as much as they want, and of course they will be joined by those who were not fasting, who will also eat as much as they want. The children in the family will roll Easter eggs around the table, tapping one egg against another trying to find the strongest one. No one will criticize their behavior, and the adults may even join in. Everyone feels like a child on Easter Sunday.

First  published in The Moscow Times.