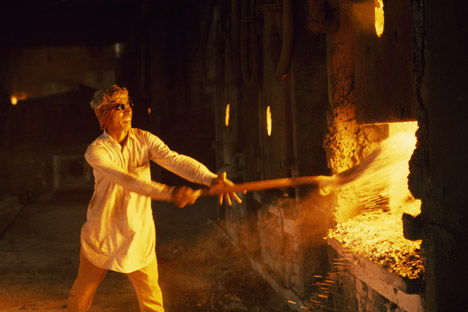 Since late 1950s Russia has assisted India's growing heavy industry. Nikolai Goldin who was chief engineer at the Bhilai steel plant gives a fascinating account of those times.

The USSR recognised India even before the country became independent from the British rule. This step helped India to consolidate its role as a new influential power, in a world gripped by the Cold War.Subsequently, in the late 1950s, the USSR began to provide assistance to India in laying the foundations of its heavy industry.

From that time until the mid-1980s, around 70 industrial plants in the Indian economy’s basic industrial sectors were built with Soviet assistance.Over time, they provided around 40% of India’s iron and steel, almost 80% of the steel-making equipment, more than 40% of the equipment for the mining industries and 55% of the heavy power-industry equipment, 10% of the electricity, and a significant share of the country’s petroleum products, coal, pharmaceuticals, and other products.

Below we report on relations between Indians and Russians at these plants while they were under construction.Unfortunately, not all of the participants in these events are still alive.Nikolai Vasilyevich Goldin, who was chief engineer at the Bhilai steel plant and later served as the Soviet Minister of Heavy Industrial Plant Construction, died in 2001.

It all began in a rural area of Madhya Pradesh, one of India’s economically backward states, in 1956. Former Soviet Minister of Heavy Industrial Plant Construction Nikolai Goldin told us in an interview how it happened. In 1958 he had been the construction supervisor and chief engineer at the Bhilai Steel Plant.

Under the bilateral government-to-government agreement, the Soviet side was to do all the design work and produce all equipment, structural steel, refractory materials, and pipes. We would supply all of this to India, install it, and hand the project over to the Indians on a turnkey basis. We had never done this scale of project abroad before.

It’s obvious that this was no light burden for the Soviet economy.At what level was the decision made to go ahead with construction?

“At the level of the top Communist Party leadership. Therefore fulfilling orders for Bhilai was a high priority. Indian Minister of Steel Swaran Singh got to see this first-hand. On a visit to Uralmash, he was astonished to find posters that said: ‘Bhilai. High quality and ahead of schedule!’

“The British were building a steel plant in India, as well. They started construction before we did, but they finished later. We had this enterprise ready for commissioning in three and a half years. The secret of success was tight organization, discipline and self-sacrifice, and the fact that our engineers and technicians, unlike the Americans or West Europeans, were prepared to convey their know-how to the Indians, sparing neither time nor effort.”

Senior officials from both countries were watching the construction site.They visited it.Did this have an impact on the work?

“Khrushchov was supposed to visit the factory on February 10, 1960. A few days before that date, the workers went on strike. The action lasted three days. The strike organizers knew the plant’s vulnerable points. First they wanted to shut down the combined heat and power plant. That would have been a catastrophe. The blast-furnace process would have come to a halt. We would have had to dismantle the blast furnaces and start building the factory all over again.

“All the responsibility rested on my shoulders. I reported to our ambassador, I.A. Benediktov, what had happened. But he couldn’t do anything about it. An Indian official in charge of security came to me and said: ‘I request that the Soviet specialists stay away from the plant, because I cannot guarantee their safety.’

“I replied: ‘You will answer for what I do, but the Soviet specialists are going to work.’ I loaded them all into vehicles and rode with them myself, to make sure they arrived at the factory. I got them to the key sections.”

And did the strike end?

“The Indian authorities resorted to severe measures. It was announced that if the workers didn’t end the strike and disperse, force would be used. Nehru thanked us for standing our ground and saving the factory.”

“He inspected the factory in detail. The Indian engineers were greatly impressed that he understood technology. He asked what the ash content of the coking coal was; and what was the quality of the iron ore.

“Once Minister Swaran Singh arrived at the construction site,” Goldin continued. “He reported that in October the leadership of the ruling Indian National Congress party would be meeting in the city of Raipur, not far from Bhilai.

“‘What can we show Prime Minister Nehru?’ he asked me.

“I answered, ‘We’ll have to think about it.’

“We conferred on the matter and decided that we could launch the rail mill, the shop that would make railroad tracks. This meant completing this part of the plant six months ahead of schedule. Upon hearing our proposal, Swaran Singh said it was impossible.

“I replied that I would take full responsibility. But we would need to get everything in order and inform all the workers, engineers, and technicians that we had to finish the rail mill before Nehru’s visit. I said this would inspire the Soviet and Indian personnel to show real enthusiasm in their work. The minister changed his mind and gave his approval.

“We organized a three-shift schedule. I would come to the factory at 10:00 a.m. and leave at midnight. Our people worked overtime with no days off. The only compensation I could promise them was a trip with their families to Bombay, Calcutta, or some other city after the shop was finished.”

Not everyone, however, was happy with this burst of effort. Three days before the mill was to be launched, Goldin recalled, there was sabotage. The electric power supply cable was cut. And someone poured sand in the bearings of one of the milling units.

“We discovered in time what these angry people were up to. If they had succeeded in their intentions, it would have discredited the Soviet Union in the eyes of the Indians and the entire world: because foreign reporters were coming to the plant on the eve of Nehru’s visit. But nothing came of these intrigues. Nehru was very pleased with our work,” said Goldin.

But who was behind the sabotage?Was it the strikers?

“I asked the Indian officials about this. There was no answer. I think that the people who tried to do the sabotage wanted to express their dissatisfaction with the government. There were 67,000 Indians and 650 Soviet specialists working at the plant. Its construction was nearing completion. Soon there would be a big reduction in the workforce. And they wouldn’t be able to find other work.”

How were our specialists paid?

"They received 30% of their pay in rubles in the USSR. In India they were on salary at a level that depended on what function they performed. As chief engineer, I received 650 rupees. I don’t know how much that was in dollars; we didn’t think in those terms. In order to accumulate some income, the workers would take home gabardine, tulle, and footwear. (These products could be sold through consignment shops.) But then our customs agency came up with the idea of severely limiting the amount of footwear and fabric that people working abroad could import. And there wasn’t anything else the workers could purchase in India. I went to the Central Committee about it. The outcome was that the customs people were ordered to allow workers from Bhilai to enter the country without customs inspection.”

Construction of the Visakhapatnam steel plant began in 1981, and the Soviet engineers and technicians didn’t have any grounds for complaining about their living conditions there. Vladimir Khrustalyov headed up the team from the Soviet Tyazhpromexport [Heavy Industrial Export] Association, which was responsible for implementation of the inter-governmental agreement on building this plant. He worked at the construction site from 1981 to 1987. Unlike at Bhilai, where our people arrived at the still-empty site and at first had to make do without running water and other conveniences, at Visakhapatnam the Indians built a residential town for the personnel. We had a cultural center for 400 people, with air-conditioning, and our own cafeteria, kindergarten, and clinic.

The basic difference between the construction site in Visakhapatnam and the one in Bhilai was that by then the Indians, with Soviet assistance, had created their own basic industry, which could supply machine-tools and heavy industrial construction materials. Khrustalyov gives the following data: at Bhilai, approximately 95% of the equipment and 85% of the structural steel and materials came from the USSR. At Visakhapatnam we supplied only 17% of the equipment and 5-7% of certain refractory materials that were in short supply, and some of the metal structures. Everything else was made in India.

“But was that approach justified from the standpoint of our national interest? After all, didn’t it turn out that we were blocking our own export potential?” we asked Khrustalyov. He replied that no other approach had been possible.

“India is not Nigeria. It has enormous scientific and technological capabilities. Ultimately they would have managed to create their own basic industry themselves. Yes, we experienced some drop in equipment exports to India. But the personnel trained with Soviet assistance are still working and the traditions of cooperation have been preserved, so that even in the late 1990s, when our government was providing not a single kopeck of credit to support our exporters, the Indians nonetheless often chose Russian partners when they were assigning contracts.”

The time you spent in India partially overlapped with the perestroika period.What impact did it have on you?

“After 1985 our government did not make a single loan for the Indian projects. Our financing was cut. From 1988-1989 on, we were cut loose and left to float free, so to speak. However you can fulfill the plan, do it. We had to compete in tenders and organize joint projects with Indian companies and firms from other countries. The scale of spare parts deliveries from Russia immediately decreased. Earlier our association had been supplying $20 million worth of them annually, but now it’s $20 thousand. Of course we send fewer technical people to India. But, as is well known, nature abhors a vacuum. The vacuum that had formed began to be filled by the Germans, Italians, and even the Chinese, who can offer the Indians our older steel technologies.”

At the same time, Khrustalyov says, perestroika brought a lot of good things, too. The previous tough barriers against contact between our personnel and the Indians essentially disappeared. People started visiting each other. The construction supervisor was the guest of various Indians and, in turn, he invited the port director and the chief of police to his home. We also exchanged movies with the Indians and taught them the Russian language. These ties continue to “work” for the benefit of Russian-Indian economic relations.