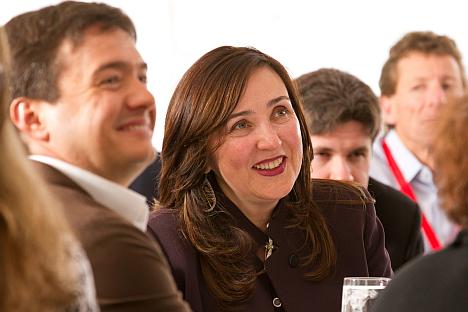 Alexandra Johnson, managing director of Moscow-based DFJ-VTB Aurora Fund, wants to use those famous Russian scientists that everybody knows exist, but nobody knows how to commercialize. Source: Asa Mathat Photography | www.asamathat.com

The Skolkovo Foundation, which is creating an innovation center near Moscow, has signed partnerships with major Russian investors and several international funds. Investment officers emphasized that there is still plenty of room for other venture capitalists.

“The Russian venture capital market is rather small,” said Alexander Lupachev, chief Investment officer at Skolkovo, “We are interested in investors with experience and a successful track-record.”

Last week at the Global Technology Symposium in Silicon Valley, the Skolkovo Foundation signed a memorandum of understanding with one of the longest-running U.S. venture capital firms, Bessemer Venture Partners, which will inject $20 million into the project over the next several years.

The Skolkovo Foundation provides grants and mentorship programs, and connects entrepreneurs in Russia with more than 30 venture capital funds, ten of which are international. With its venture capital partners, the Skolkovo Foundation has invested around $40 million in 40 projects. The agreement with its partners is to invest more than $350 million during next three years.

“I view this partnership with Skolkovo as an opportunity for us to really find our way to some of the best start-ups in Russia,” said David Cowan, a partner with Bessemer. “We are like the paparazzi of entrepreneurship, we always want to be looking where the action is and now we see it happening in Russia in a big way.”

Cowan said that Bessemer invests actively in Brazil, India, Israel and some parts of Europe.

The Skolkovo Foundation is looking to acquire more partners from U.S. and European venture capital funds, as well as attracting Asian investors. Together with Russian Venture Company and Rusnano Skolkovo, it will bring a group of venture capital investors from Asia to begin negotiations in Russia.

Lupachev said that a majority of the success stories at Skolkovo come from the IT sector, but the foundation is planning to enter other sectors such as biotech and green technologies.

Partnering with Skolkovo, international venture capital funds get access to pre-selected start-ups in Russia as well as a local partner who can oversee the projects. Some groups such as $100 million DFJ-Aurora Fund have also opened up offices in Russia.

DFJ-VTB Aurora is a joint partnership of DFJ Network and Russian investment banking group VTB, which has offices in Silicon Valley and Moscow.

“We want to use those famous Russian scientists that everybody knows exist but nobody knows how to commercialize,” said Alexandra Johnson, managing director of Moscow-based DFJ-VTB Aurora Fund. “We are long term investors and we are willing to work with entrepreneurs as they progress.”

Johnson said that some of the companies they invest in have teams of Russian engineers but work in Silicon Valley if the product is more suitable for the American market.

Other venture capital firms are actively talking to Russian companies, including seed fund 500 Startups, which runs a $29 million fund for emerging and early-stage companies.

“There is a lot of engineering talents in Russia,” said Dave McClure, a founding partner of 500 Startups, “I definitely became aware of the size of the domestic market in Russia.”

McClure visited Russia twice in the fall of 2011 and is planning to start investing in Russian companies within the next year. 500 Startups already invests outside of the United States in some Eastern European countries as well as in Brazil, India and China.

A new Skolkovo resident is Zingaya, a company with a software development team in Russia. The company provides a web-based alternative to toll-free numbers. Zingaya has more than 100 clients, mainly in Russia, but this year it started its U.S.-based operations. Just last year, the company got its first investment of more $1 million from Russian investors and a business angel Esther Dyson, who provided $50 thousand.

Read an interview with Esther Dyson: "Online services can reduce the costs of being honest"

Dyson is an angel investor who has been putting capital into Russian start-ups for the past several years and is on the board of the Russian search engine Yandex, which went public last May.

“There is a lot of capital in Russia, many times companies think they need to go abroad, but they are wrong,” Dyson said. “What is hard to find in Russia are experienced managers.”

Dyson said that Russia doesn’t have the kind of managerial talent that has grown a business from start-up to mid-size enterprise.  American venture capital firms can offer the advice and management support that not all Russian investors can offer, she said.

“It is not easy to find money, but I think people focus too much on money and not on the management,” continued Dyson. “It is a tough market for Americans. There is a lot of competition and it is even tougher if you are a Russian coming to the U.S. market.”