The charming effect on global politics 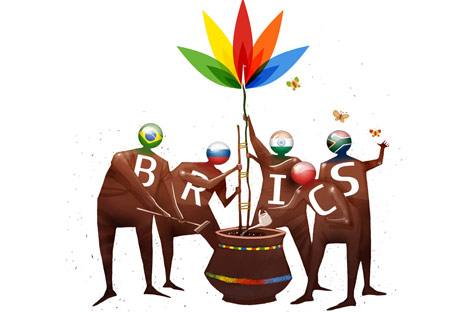 Has the Delhi BRICS summit signaled a new wave of power politics in a multipolar world order?

The Delhi BRICS summit, which concluded March 29, gave a clear indication that global politics is entering a new phase – one in which the developing world will take the lead in the global decision-making process.

Like the previous BRICS summits, the 2012 summit attracted considerable media attention globally. While critics reject the very existence of BRICS, noting that it is merely a creation of Goldman Sachs, economists and developmental theorists from the third world argue that the development of the BRICS grouping from an acronym into an actual body demonstrates the growth of a diversified and multipolar world.

The Western media reject the importance of BRICS, stating that powers like China and India will never think alike, and the dialogue in the developing world has also noted the differences of the political and social systems of the BRICS countries, particularly their foreign policy objectives. Nevertheless, the very existence of BRICS and its development over time from an economic grouping to an organization that discusses a range of global issues that are vital to developing-world politics, suggests that BRICS will play a bigger role in times to come.

The progress of BRICS joint statements and joint declarations shows how BRICS is becoming more institutionalized. The first two Joint Statements, released in 2009 and 2010, reflect the conceptual stage of the BRIC concept; the Sanya (2011) and Delhi (2012) declarations explain the vitality and import of this grouping in global politics.

The Delhi Declaration not only tries to actualize some of the stated themes of the Sanya summit, but also indicates new action plans, stating the future objectives of BRICS. Additionally, it raises the scope for bigger powers like China, India and Russia to rationalize a credible political understanding and to ponder whether the time has come to overcome the existing political misunderstandings among them and forge a credible union that can be useful for global governance. This is particularly vital at a time when the U.S. is forging a trans-Pacific partnership with diverse economies from both Asia and the Asia-Pacific region.

BRICS: A bridge across three oceans

BRICS has always highlighted the significance of G20 in global economic governance. While the 2009 Yekaterinburg summit exclusively acknowledged the central role of the G20 in dealing with the global financial crisis, the Brasilia Summit in 2010 highlighted the G20 members’ contribution to IMF resources. The Delhi summit, too, pointed out the “primary role of the G20” as a forum for global economic cooperation. The major powers in BRICS must constructively increase the pressure on the developed world to reform the global financial architecture, and increase the voting rights of China and India, realigning the architecture that is currently more favorable to the U.S. and the EU. Russia could take a lead in this regard when it takes over the G20 presidency in 2013.

While expressing concern about the “slow pace of quota and governance reforms in the IMF,” the Delhi declaration calls for a comprehensive review of the quota formula for developing countries in the global financial bodies.

Politically, the BRICS members may not ever be very united, given their different political systems and social situations. However, the Delhi BRICS summit did indicate that a difference of opinion is not always a result of differences in perception. For example, on Iran, India’s stance may be different from that of China and Russia, but by taking a common stand they can have a lasting effect on global politics. A strong, unified BRICS position should cause the U.S. to think twice before acting unilaterally, and encourage Washington rather focus on diplomatic procedures and dialogue. The BRICS united understanding on Iran and Syria indicates that it is possible for the members to converge on foreign policy issues, even if their foreign policy objectives and interests may not entirely be in harmony. The decision made in Delhi to address political issues shows that BRICS is not just an economic entity; it has a certain political clout that is central to the future of global politics.

BRICS is indeed emerging as a credible multilateral grouping that will be vital for global politics in years to come. Yet, the current limitation of BRICS is that it neither represents a political coalition nor is showing much interest in taking a lead on greater global geopolitical and strategic issues.

The opportunities for BRICS are many; equally, the challenges are big. The immediate thrust should be on the promotion of intra-BRICS trade and setting up a formal BRICS platform through a secretariat, where economic and political sensitivities could be discussed. As the recent BRICS summit indicated, the developmental banks of BRICS countries could take up a first call to formalize and establish understanding in extending credit facility in local currencies, and in the multilateral letter of credit confirmation facility agreement. The proposal to extend credit facility in local currency is a momentous step, as it intends to reduce the demand for fully convertible currencies for transactions among BRICS nations and will reduce transaction costs.

The Delhi declaration and the 2012 Delhi BRICS summit will be remembered as a progressive step towards a new world order. Politically, the BRICS members’ understanding and perspective on the issues of Iran and Syria are a positive indicator of how the emerging economies are forging a united political stand on key global issues. Economically, the BRICS call on the IMF, World Bank, and on the global markets also show the move toward a more unified, powerful front. The calls for reforming the IMF quota, considering a World Bank president from the developing world and for developed economies to “adopt responsible macroeconomic and financial policies” to avoid creating excessive global liquidity, are all huge statements targeting American and European supremacy in the global financial architecture. Though it is not going to be easy to curb the Western dominance in the global financial institutions, the Delhi summit indicates that the process has already begun.

Dr. Jagannath P. Panda is Research Fellow at the Institute for Defence Studies and Analyses (IDSA), New Delhi; and currently a Carole Weinstein program Visiting Faculty at the Dept. of Political Science, University of Richmond and a visiting scholar at the ACDIS program of the University of Illinois in Urbana Champaign.