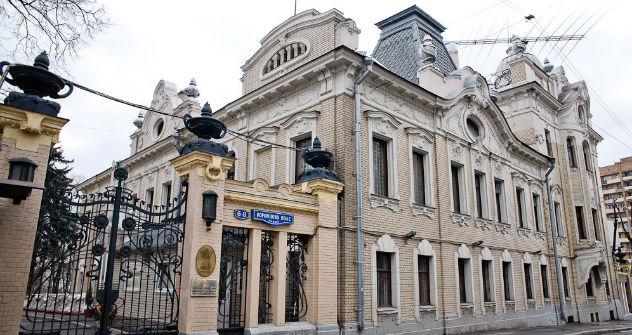 From shops and restaurants to streets and monuments, Indians make sure that the sounds and songs of India are never far behind.

There is a corner of foreign land, which is forever India. In Moscow also, one can find many places, which have become preferred haunts of Indians and persons of Indian origin. From shops and restaurants to streets and monuments, there are special places, which bring together Indians of varied cultural backgrounds and have an emotional pull for them.

The hub of Indian activities in Moscow, the embassy of India, is a historical building built by renowned Russian architect Ivan Baryutin in 1911. It is located in Vorontsovo Pole street, initially the residence of the Russian noble family of Vorontsov Princes in the 14th century and then the territory of the Andronikov monastery in the 15th century. This area miraculously survived the great fire of 1812 that burnt almost the whole city but continues to retain its patriarchal old-Moscow look.

The neighbouring streets such as Chistoprudny Boulevard or Myasnitskaya Street also have unique historical ambience. Here you can find the majestic Archangel Gabriel Church, as well as buildings that transport visitors to different periods of the Russian history.

Making a home away from home

More than 10,000 Indians live in Moscow, mostly students, businessmen, representatives of trade missions and staff of the Indian embassy. Well-known Indian organisations include Indian Business Alliance (IBA), an umbrella organisation for business enterprises functioning in Moscow, Hindustan Samaj, one of the oldest organisations open to all Indians, and students association. Cricket matches held at the MSU stadium and Indian song and dance concerts are popular events that attract large crowds.

The embassy hosts national holiday celebrations and myriad cultural events. But there are other Moscow locations that are traditionally known as “Indian” among both Indians and Russians. One of them is the Cultural Centre of Gubkin Institute, situated on the Leninsky Prospect street, which used to be the Museum of History of Gubkin State University of Oil and Gas. The other is the Interclub conference hall at the Russian Peoples' Friendship University (PFUR). The PFUR warmly welcomes different ethnic and cultural groups living in Moscow, but for Indians, this place symbolises “a real home away from home”. On Diwali and Holi, large groups of people of Indian origin, dressed in festive clothes, come to these places with their families to celebrate the Festival of Lights and the Festival of Colours.

But Indians are not the kind to bond only on festivals. There are a number of Indian eateries where Indians often meet over a cup of masala tea or a lunch of curry. “Talk of the Town”, “Maharaja”, “Khajurao”, "Darbar” are just some of the restaurants where Moscow-based Indians enjoy the food and atmosphere they’re accustomed to. According to the Indian embassy, there are around 14,000 Indians in Russia, with over half of of them living in Moscow. Around 4000 Indian students are enrolled in various medical and technical institutions in the country.

For any Indian feeling homesick and missing their favourite flavours and aromas or for that matter, for a Russian who’s got hooked on delicious Indian food and beautiful jewellery and scarves, there are a host of Indian shops in Moscow, starting with low-cost markets where one can grab inexpensive bracelets or sweets to the Indian shops selling exquisite luxury goods for the exacting buyers. “Indian Spices” shop on Sretenka street, “White Clouds” esoteric centre and shop on Pokrovka Street and the famous Indian market in the Sevastopol Hotel are redolent of Indian aromas and are buzzing with customers looking for a bargain. Moscow State University stadium, where cricket matches between eight teams are held, is a favorite with Indians who love to indulge their passion for the game here. 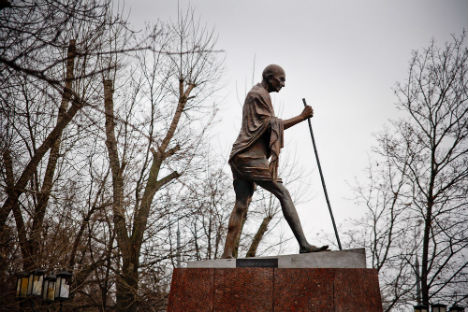 Monument to Mahatma Gandhi was created in 1988. Source: Ruslan Sukhushin

And even those who are not very familiar with the Indian cultural life in Moscow can still get a feel of India by just walking along the streets of the city. Many people on their way to work by car or public transportation daily come across landmarks and streets named after iconic Indian politicians or cultural personalities. Jawaharlal Nehru Square, Indira Gandhi Square with the Indira Gandhi monument close to Moscow State University, the statue of Mahatma Gandhi in Moscow's “Museon” park with the monument of Peter the Great in the background, and the Jawaharlal Nehru monument on Vernadsky Prospect street are just a few Indian names that Muscovites encounter on a daily basis. Even though Indian names stand out among the names of other Russian streets such as Lomonosov Prospect or Leninsky prospect, they merge effortlessly and strike their own chords in the symphony of the Moscow streets.

senior executive,  pharmaceutical firm
"My favourite haunting ground in Moscow is the newly constructed "Moscow City", which is an array of skyscrapers with several ultra modern facilities."

indian businessman
" I love to loiter around Red Square and the Kremlin at least twice a month. There is no place, which is more beautiful."

PFUR 1995 philology graduate
" Mikluho Maklaya street, my Alma Mater place, is very special for me. It makes me feel nostalgic about my student days."