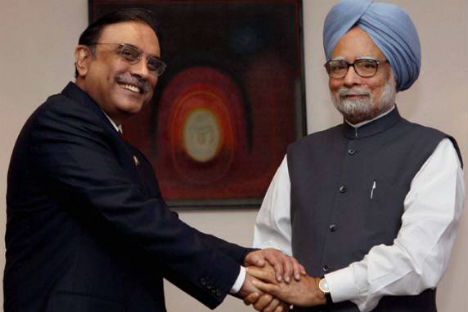 If India-Pakistan high-level talks produce a sense of déjà vu, it should not come as a matter of surprise. False hopes have been raised so often in the interactions of the two leaderships in the 6 decades of shared history. So, the question is legitimate: What has been the difference, if any, when the Indian Prime Minister Manmohan Singh and the Pakistan President Asif Ali Zardari met in New Delhi last Sunday?

At least six good reasons can be discerned as to why this latest meeting may have made a difference in the larger scheme of things in the India-Pakistan relationship. First, this has been a rare occasion when an impromptu meeting has been held as any two neighboring countries would normally do. The initiative was entirely Zardari’s. When he expressed the wish to go on a pilgrimage to a revered Sufi shrine in India, Manmohan Singh turned it into an occasion to meet. Indeed, on a scale of 10, the possibility that Zardari would have estimated the inevitability of it happening should stand at ten.

In the event, the meeting turned out to be without the pomp and substance associated with high-level interactions in the India-Pakistan context, which in turn, enabled the focus to be kept on the substance of the “unstructured” conversation between the two leaders rather than the form or rhetoric. What ensued was a “friendly and constructive conservation.”

Second, the event was a completely India-Pakistan event, which left no scope for third parties to claim even remotely that they played the role of a “facilitator”. To all appearance, Washington was taken by surprise by Islamabad’s attempt to give the abrupt ballast to the India-Pakistan dialogue process. It scrambled to introduce a certain American orientation and priority into the meet by announcing its decision publicly in New Delhi – even ahead of informing the concerned party, namely, Pakistan – about putting a 10-million dollar bounty on the head of the Lahore-based Islamist leader Hafiz Saeed. For a day, perhaps, Washington succeeded in raising dust in the Indian capital and distracting the Indian perceptions but ultimately both New Delhi and Islamabad decided to handle the Saeed affair in their stride without losing their sense of proportions regarding the broad range of the dialogue between the two countries.

This abortive “hijack” attempt by the US, however, helped to highlight that the India-Pakistan dialogue is slowly and steadily gaining traction and is acquiring a dynamics of its own. In fact, the India-Pakistan ties are looking up although there is chill in the US’ ties with Pakistan or Washington’s capacity to influence Islamabad is virtually nil today. Arguably, Pakistan’s capacity to negotiate the terms of its reset of ties with the US gets a fillip in the circumstances. The Indian diplomacy also seems to have come full circle in placing its accent on bilateralism as the best approach to advance its dialogue with Pakistan rather than seeking the US’ good offices. Interestingly, China lost no time welcoming these trends in the India-Pakistan dialogue process in a manifestly enthusiastic tone.

Thus, a third template that needs to be noted is that India-Pakistan dialogue is gradually assuming a regional dimension. This is only to be expected since both countries are regional powers and the regional security milieu is poised at a crucial juncture. For the first time, India and Pakistan have begun discussing the Afghan problem at the leadership level. There is indeed a long way to go in harmonizing the respective positions and interests of the two countries, given the backlog of mutual suspicions. But the fact that such a conversation has begun itself reduces the scope for third parties to take advantage of their mutual suspicions.

Fourthly, economic cooperation has surfaced as a key locomotive of the India-Pakistan normalization. This has been originally an Indian idea – namely, much as intractable differences may remain, the two countries should explore mutually beneficial cooperation in the economic sphere – but the current initiative is all Pakistan’s. Historically, Pakistan’s stance has been rejectionist, insisting that unless there is a resolution of the Kashmir problem, there could be no forward movement in the bilateral ties. Thus, the decision by Islamabad to grant “Most-Favored Nation” status to trade with India is in many ways a litmus test of a new thinking in Pakistan. Without doubt, it promises to open up huge possibilities of economic cooperation, including at the regional level. Energy could be a thrust area. Significantly, according to reports, Zardari suggested to Manmohan Singh that the two countries should emulate the pattern of development of the Sino-Indian relationship over the past decade or so, which has taken impressive strides thanks to a robust growth in trade and economic cooperation. Implicit in this is also the strategic paradigm that Zardari couldn’t have been unaware of, namely, that India and China have been developing their relationship rapidly notwithstanding the outstanding border dispute between the two countries.

Fifthly, the two leaders touched on the range of issues in the bilateral issues such as Sir Creek (maritime boundary), Siachen dispute and Kashmir problem and agreed on the need to move forward “step by step”. India also found satisfaction that there would be occasion soon to discuss its concerns over terrorism at the level of the interior ministries. However, the big question remains as to whether the two leaders agreed on resuming the back channel contacts regarding Kashmir, which had been making good progress toward reaching a matrix of understanding when they got suspended following the political developments in Pakistan in 2008 leading to a change of government.

Finally, what stands out as the most significant outcome of the meeting in Delhi is the definite possibility of a visit by Manmohan Singh to Pakistan in a very near future. The two sides have agreed to commence “substantive preparations” through the diplomatic channels for the Indian prime minister’s visit. Coming after over a decade of former Prime Minister Atal Behari Vajpayee’s visit to Pakistan in January 1999, Manmohan Singh’s visit will be a landmark event and the two sides can be expected to build as much content into it as possible. This could well mean resolving, finally, at least some of the “doable” issues between the two countries such as Sir Creek and/or Siachen on which agreements are virtually waiting to be formalized. If that happens, the India-Pakistan relationship will be transformed and will move on to a much higher trajectory.

On the whole, last Sunday’s meeting in New Delhi may not be conspicuous for its concrete results on issues. What the meeting achieved was to garner the positive tendencies in the recent months and channelize them purposively in the period ahead into a new phase. This approach was most obvious in the offer made by Manmohan Singh to provide any help Pakistan may need in the rescue work in Siachen where an avalanche killed over a hundred Pakistani soldiers. The political symbolism couldn’t have been lost on the Pakistani side. Siachen has been arguably the most contentious operational theatre for the two armies for nearly three decades.

If a single factor is to be highlighted, it is that a perceptible shift in the Pakistani attitude toward India in the recent years provides the backdrop to all this. There is a “bipartisan consensus” in Pakistan today between the two mainstream political parties that an improvement of relations with India is in Pakistan’s interests – although Pakistani politics happens to be highly polarized at present. Zardari’s visit to India was hailed as a “step in the right direction” by former prime minister Nawaz Sharif, his staunch political foe who leads the main opposition party Pakistan Muslim League – N. This is a definite break from the past when the two mainstream parties were locked in a zero-sum game on issues concerning India-Pakistan relations. And it could be a game changer.

In India, too, the detractors of Manmohan Singh’s initiative to launch a dialogue process with Pakistan are increasingly feeling isolation but the partitions of the mind come down slowly. The ground reality is that there is peace on the India-Pakistan border; ceasefire along the Line of Control is holding; cross-border terrorism has dropped; security situation in Jammu & Kashmir has distinctly improved; mutual rhetoric and grandstanding has ceased. From all this, it is already possible to say that Manmohan Singh’s initiative has been vindicated and his political doggedness to press ahead with the dialogue process – virulent resistance and opposition by detractors at home notwithstanding – has begun showing practical results. Which, of course, also raises high expectations out of his visit to Pakistan in the months ahead.