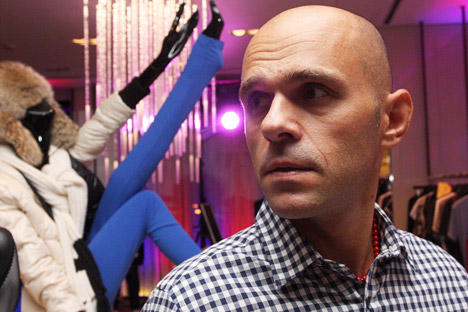 The Cycles & Seasons festival attracts designers who want to reveal their latest creations in a special, more private atmosphere. This time around, Cycles & Seasons featured four shows: Nina Donis, Vika Gazinskaya, Alexander Terekhov Atelier Moscow and Lesya Paramonova. The new display by Nina Donis attracted around 300 people, including representatives of Moscow's glittering fashion scene. Ahead of the show, huge screens rolled out a 3-D video-art clip depicting a journey over the dark, rocky terrain of a distant Nordic landscape.

Donis Pupis and Nina Neretina, the designers behind the Nina Donis brand, said they drew inspiration for the collection from, "...nature, woods, colors, forest textures, landscape painting, military uniform, the ‘70s and ‘80s, Baroque costumes, Russian national dress, kids’ photos, the circus, interior-design shots... It's not a detailed study of these objects, rather memories of them."

The collection presented robes belted at the waist, long-sleeved one-piece suits, tapered Capri pants combined with jackets, wide breeches with free sweat-shorts, high-waisted trousers with tucked-in tops, voluminous coats and capes. Everything was essentially made of textured material, faded fabric, corduroy and thick-quilted cloth. Natural shades dominated: muted blue, marsh green, mustard, dark brown and cream. The highlights of the collection were the poncho coats, one-piece suits and colorful patchwork dresses. In line with tradition, all the models in the Nina Donis show wore sneakers. Incidentally, the same stylistic blend could be observed in the audience, some of whom had clearly come to the show attired in numbers from previous Nina Donis collections.

"I consider Nina Donis to be among the most important designers of the 21st century,” said fashion expert Natalia Turovnikova. “It so happens that they're based here in Russia, which means, how shall I say, their output doesn't 'reverberate' quite as much as it would in Europe. But they stick to their artistic principles and strive toward an ever greater simplification of form. Every season they simplify more and more. And, of course, they constantly surprise me. I love their sexuality. Their clothing emphasizes a strong personality. For me, the way they work with the source is simply wonderful. In this collection, I can clearly see where the inspiration comes from. Classic Barbour jackets, coat linings... They take a well-worn form and develop it. It's colossal."

Vitaliy Kozak, another fashion expert also believes Nina Donis is producing some of the most interesting clothes made. "Let's start with the essentials: Nina Donis are geniuses. No one can match them in the Russian world of fashion. Even on the global stage, Nina Donis are among the best. They remain true to their ideals, and every season they imitate yet completely reinvent themselves,” Kozak said.

At the end of the fashion parade, Donis Pupis, half of the Nina Donis team, talked to Ekaterina Mikhailova and Timur Ganeev of Russia Beyond the Headlines.

Russia Beyond the Headlines: What are your overriding emotions after the show? Are you happy with how it went?

Donis Pupis: I feel a great sense of relief. We prepared a long time for this show. I'm feeling quite numb at the moment, no emotions, just very tired. Everything went the way we anticipated. There were lots of people — that's always an excellent sign.

RBTH: Did you follow the displays of the other designers? What impressed you?

D.P.: Of course, we've kept an eye on what's been going on. We're interested in designers who develop and strive towards new ideas. We work in the same vein, always trying to create something new.

RBTH: Where will the new collection go on sale?

D.P.: Only in Moscow. At the Kuznetsky Most-20 and Leform stores.

RBTH: Can you briefly characterize the Nina Donis buyer? What is she like? Who do you envision wearing your creations?

D.P.: People who share our taste. They're probably kindred spirits, but who they are I don't know. We don't keep track of who we appeal to. And we don't work with private clients, don't accept private commissions, and have no direct contact with buyers, only with people close to us, our friends, but that's nothing to do with selling our work.

RBTH: Can you name your favorite wardrobe item?

D.P.: We already have, but in very limited editions. We may get round to producing a fully-fledged men's collection. The ideas are there, but I'm not sure if or when they'll see the light of day.

RBTH: What do you think about the possibility to be an 'honest' designer in Russia?

D.P.: That's got nothing to do with Russia. You have to be an honest person in any field of activity. The design profession is no exception.