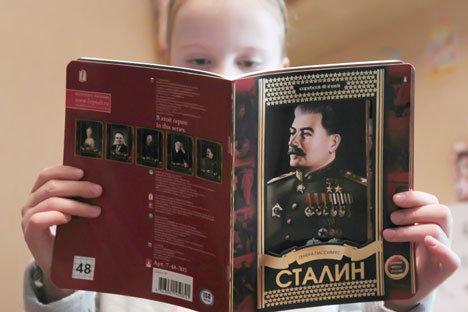 The Great Names of Russia notebooks are sold in sets of five, with five different covers. “This set is dedicated to great people of Russia: Empress Catherine II, Academician Korolyov, the Great Commander Kutuzov, the Russian composer Rakhmaninov (Rac

School notebooks depicting Stalin have touched off a public scandal. Human rights defenders are demanding their recall. But while adults argue over the ethics, children think that Stalin’s portrait on their notebooks is just an amusing picture.

It is “absurd” to inculcate the juvenile subconscious with Stalin’s image. That was the view stated by Arseni Roginsky, head of the human rights organization Memorial, in an interview with Interfax. Memorial had come out against the sale in Russia of school notebooks with Joseph Stalin’s picture on the cover. Roginsky said that the Generalissimus had played a “horrible” role in Russian history, and that role should be described in textbooks, alongside all the other roles he played. He added that, whether intentionally or not on the part of the publishers of the notebooks bearing Stalin’s image, “this is, of course, Stalinist propaganda.”

Artyom Bilan, art director at the Alt publishing company which issued the scandalous notebooks, replied to all these criticisms, speaking to an RIA Novosti correspondent: “The Public Chamber is not a legislative body of the RF, and merely expresses the private opinions of its representatives. And, as I understand it, their opinion is at odds with that of the majority of Russian citizens, who a couple of years ago in a TV project called Russia’s Name ranked Stalin as one of the outstanding figures in Russian history.”

Bilan also said that the notebooks with Stalin’s portrait on the cover had been published as part of the Great Names of Russia series, along with Kutuzov, Zhukov, Nakhimov, and other historical figures, and would not be subject to recall. “On what basis should we recall such a successful product?” exclaimed the Alt representative. It should be noted that this remark is irrelevant, since all the notebooks showing the Generalissimus have already been snapped up in stores, despite the fact that they are not cheap (220 rubles for a set of five notebooks).

There has also been an heated online discussion of the matter. The sharply differing opinions expressed there range from “ban them immediately” to “Stalin is a Russian hero, whom children should come to recognize.”

Read more: Monuments of the past: destroy or preserve?

“In my opinion, there’s food for thought there. Indeed, why should these people be so upset about Stalin’s portrait, in particular? If you haven’t even considered that question, it’s time to ask yourself. Stalin was a tyrant and dictator? OK, but wasn’t Catherine the Great a tyrant and dictator? Weren’t there constant uprisings, executions, and wars during her reign? Not to mention the fact that she overthrew her own husband, Russian Emperor Peter III, after which he died prematurely. As the reports indicate, the Empress is right there on the notebook covers along with the Generalissimus, and nobody’s upset about that. Nobody is demanding, ‘Ban that forever!’ How come?” asked the blogger Black Lightning.

Mikhail Vinogradov, head of the Center for Legal and Psychological Assistance in Extreme Situations, commented in an interview with Vesti.ru that Nicholas II, for example, had been called “the bloody,” but now he has been canonized.

“Peter I, Catherine II… There are many historical figures it’s impossible to characterize in a simple way,” says Vinogradov. “Why should we throw out our historical past? Yes, Stalin was a tyrant and a despot. Under him the Gulag was set up, and many people died there, with 20 million (or more) becoming victims of repressions. But he led the country for 30 years. And, as Churchill said, ‘Stalin received Russia with the plow and left it with the A-bomb.’ Yes, there was cruelty under Stalin. Nonetheless, it was under him that the country won the war and advanced to the forefront in various areas. Therefore I think that children should be told about Stalin, but the question is how. This is an issue for psychologists.”

And while the adults are thinking about how to teach our complex history to children, the latter have already figured it out. Many schoolchildren thought the portrait of Stalin on their notebooks was just a cool picture, an Internet meme, or an opportunity to “tweak the moustaches” of their teachers.

Original text is published in Vesti.ru