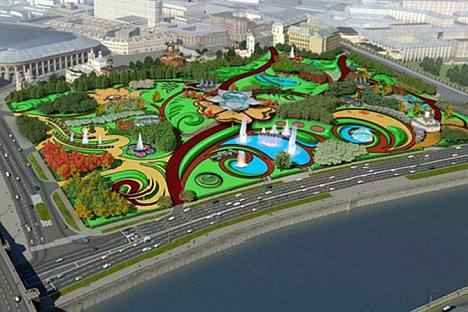 Projects presented for the a competition to build the Zaryadye Park. Source: mka.mos.ru, AFP

More than 100 applications have been submitted for a competition to build the Zaryadye Park, which will rise on the site of the demolished Rossiya Hotel in central Moscow. Some projects are strikingly original, others ambitions, and still others push the limits of feasibility.

Projects presented for the a competition to build the Zaryadye Park. Source: mka.mos.ru, AFP

In late January, Prime Minister and President-elect Vladimir Putin proposed building a multi-functional park on the site of the demolished Rossiya Hotel. The gaping 13-hectare area at the very heart of Moscow has been empty since the authorities condemned the hotel in 2006.

On Feb. 1, 2012, a competition was announced to decide the best project to develop the empty site. The open contest attracted hundreds of bids, of which 116 were shortlisted by the jury. The Moscow administration then posted all the suggestions on a website and invited Muscovites to vote. The winning projects will make it into the next stage of the competition. Here are few of the most memorable models:

The inspiration for this park came from Russia’s traditional Khokhloma paintings, with elaborate curved flowerbeds and paths echoing the patterns of leaves and flowers. At the center of the park is a concert hall covered with a glass cupola. There will also be an astronomical observatory topped with a glass sphere. Other features include water reservoirs with artificial islands, bicycle paths and pedestrian bridges.

This concert complex consists of two buildings shaped like two flower buds and linked via multiple glass galleries. Trees will be planted under the glass ceilings, creating a nice setting for recreational areas and cafes.

Related: Moscow faces the global challenge of the local architect

This is an ambitious project in the “back to nature” spirit. Two channels will be dug from the Moscow River, allowing pedestrians to walk in the immediate vicinity of the water. To enhance the feeling of nature and distance from the big-city bustle, the designers have proposed changing the landscape by building artificial hills and cliffs. Under one such cliff, a concert hall will be built. In winter, the slopes can be used for winter sports.

This multi-functional park complex will have a platform for concerts and a Tatlin Tower hovering over it. This tower, a symbol of Russia’s 20th century avant-garde, is 180 metres tall and in the design will have alleys radiating out from it. An essential part of the plan is decorating the park with sculptures. Underground facilities will be used for a parking lot, shops, cinemas and exhibition spaces.

This project resembles chicken eggs scattered over a piece of crumbled cloth. Five gigantic Easter eggs will be used to house a concert hall, café and parking lot. The remainder of the area will be a recreational space with flowerbeds and trees. The park will be covered with a net to protect its visitors from the hot sun in the summer and from snow in the winter.

The basic idea of this design is an abundance of flowers. The area will be covered with a network of pathways around a pond, flowerbeds and recreational areas. The project also envisions the construction of the Concert Hall with glass ceilings and a Flower Conservatory (an underground greenhouse for flowering plants).

Park of the Glory of Russia

The goal of this large-scale project is to create a symbolic park celebrating the glory of Russia. At the center, there will be a concert hall shaped like a giant white bell hanging among six towers. In addition to the concert hall, the area beneath the bell will also include exhibition galleries and a café. Four towers will have stairs and lifts, and two others will be part of a theater complex. The complex will be surrounded by a green park decorated with statues of great Russians.