Beginning a top-down attack on corruption 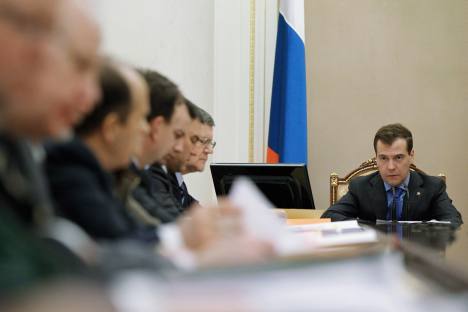 With the presidential elections over and Vladimir Putin due to return to his old job in May, the Kremlin has turned back to the task at hand: fixing Russia, Inc. At the top of the agenda is taking on corruption, and the Kremlin has just taken the first steps toward institutionalizing the fight.

This was always going to be an uphill battle. Eradicating endemic corruption is by definition an incremental process — especially in a country as large as Russia. Georgian Presdient Mikhail Saakashvili famously sacked the entire police force for taking bribes and solved the problem overnight. However, Georgia only has a few thousand traffic cops. Russia, on the other hand, has about a million “GAIshniki,” as the traffic cops are known. Firing them all at once is simply not an option.

Until now, the campaign (such as it is) has been a series of ad hoc arrests and investigations into state officials from nearly every branch of government. The strategy seems to have been to fire a series of warning shots to everyone in government that they can no longer steal with impunity.

The results have not been dramatic. Russia moved up slightly on Transparency International’s 2011 Corruption Perceptions Index to tie for 143 place out of 182 countries, up from 154 a year earlier. However, Russia remains the world’s most corrupt major economy, on par with Uganda and Nigeria.

But in the middle of March, outgoing President Dmitry Medvedev ordered the government to prepare a draft bill that will force bureaucrats to declare excessive personal purchases of real estate, securities and vehicles — anything that costs more than three years worth of combined household income.

Perhaps more important, Putin attacked the utilities sector in December, calling it “highly corrupt,” and ordered the state-owned power companies to break any contract where the beneficial owner of the counterparty was unknown. In March, federal electric grid company FSK said it may break 20 billion rubles ($660 million) worth of contracts because the counterparties wouldn’t disclose their ultimate beneficiaries. Half a dozen other state-owned generating companies have followed suit. The surprise was that it was Putin who ordered this change, as anticorruption is supposed to be Medvedev’s baby. But that is the point: The fight has moved from being fought by individuals against individuals to an institutional improvement in corporate governance and transparency. In this sense, Russia has only just started on what will be a long and bitter fight to make a difference.