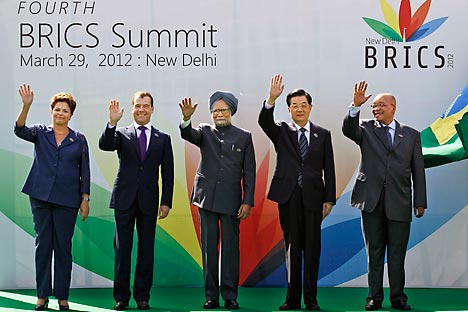 The fourth BRICS summit in New Delhi March 29 signalled the emergence of the five-nation grouping of the major emerging economies as an influential platform not just for global economic governance issues, but also for forging positions on burning issues of the time. The leaders of Brazil, Russia, India, China, India and South Africa sent a strong political message to the Western powers to deliver on reforms of international financial system and its key institutions like the World Bank and the IMF. Despite their differences, they also came together on political issues to pitch for resolution of the Iranian nuclear issue and the Syria issue through dialogue and negotiations.

“BRICS countries must also work together to address deficiencies in global governance,” said Indian Prime Minister Manmohan Singh while stressing that the BRICS prosperity was linked with the global geo-political environment. “Institutions of global political and economic governance created more than six decades ago have not kept pace with the changing world.” He emphasized that while some progress had been made in international financial institutions, there was “lack of movement on the political side.”  “BRICS should speak with one voice on important issues such as the reform of the UN Security Council,” he noted.

Referring to the ongoing crisis in Syria and on the Iranian nuclear issue, Singh said that the summit discussed the ongoing turmoil in West Asia and agreed to “work together for a peaceful resolution of the crisis.” “We must avoid political disruptions that create volatilities in global energy markets and affect trade flows,” he said, referring to the “hawkish talks” recently on Iran and Syria by the US and European Union (EU) which have driven up oil prices, putting a heavy burden on the development of oil importing countries of the BRICS like India and China.

Russian President Dmitry Medvedev also elaborated on the need for BRICS nations to unite into a closely-knit political bloc in order to resolve contentious international issues that threaten global peace and security. “It is also essential that the members of this ‘group of five’ are committed to the principles of international law, in the classic sense of the word,” Medvedev said. “We cannot accept the policy of military pressure and infringement on the sovereignty of other countries.”

“A gradual transformation of BRICS into a fully-developed mechanism of interaction on major issues in global economy and politics could become our strategic goal,” he said. “Such a step forward is only possible through joint efforts on the concept. I would like to suggest that our Foreign Ministers begin this work.”

It is worth noting that both Syria and Iran assumed importance at the fourth summit, even though they are essentially topical issues because it was only at the previous summit that BRICS introduced a political element by commenting on Libyan crisis.

“At the heart of the association’s viability is the unity of the participating countries’ fundamental economic and political interests,” Medvedev reiterated in a press statement at the conclusion of the summit.

Although the BRIC process started in 2006, the enhancement of BRIC format was really launched during Medvedev’s presidency. The first summit was held in Yekaterinburg in 2009. At the Sanya summit in April last year where South Africa was formally admitted to the BRIC forum, its member-countries started working on developing common political positions.  “We must strengthen political cooperation through a dialogue and exchange, fully take into consideration the key interests and concerns of each other, in order to give an example of mutual trust and equal consultations in the world,” Chinese President Hu Jintao said at the New Delhi summit.

“It is important to advance a reform of global economic management through stronger voting rights and representation of emerging markets and developing countries,” he said.

The BRICS grouping is still in its nascent form as it began to form only in the last few years. So far, there are no clear-cut common views on its structure or mechanism.

“The time is ripe for the institutionalization of the BRICS and the formation of bodies, which would fulfil its decisions,” the head of the Moscow-based Centre of Indian Studies, Tatiana Shaumyan, told the Russian daily newspaper Nezavisimaya Gazeta. “For instance, the Shanghai Cooperation Organization (SCO) has its secretariat and the South Asian Association for Regional Cooperation (SAARC) has its secretariat as well,” she said.

However, the BRICS has emerged as a powerful pressure group in global geo-political issues as it pitches for a bigger say for emerging and developing countries in the way the world system is being run. Against this backdrop, although the BRICS failed to come out with a common candidate, the leaders welcomed candidatures from the developing countries for the post of World Bank’s president and reiterated that the heads of IMF and World Bank be selected through an “open and merit-based” process. This is for the first time that since the founding of the World Bank after thye World War II that a US candidate is being challenged by two contenders from the developing countries.