Chronicle of a Russian's search for nirvana in India 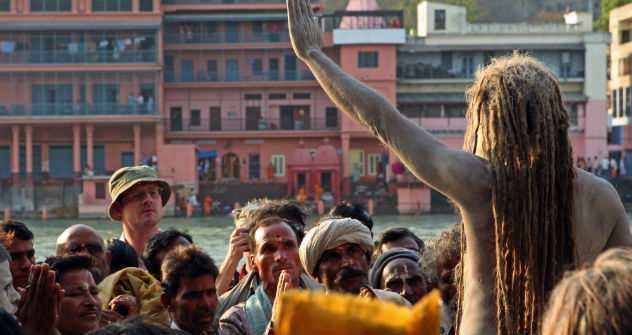 Sated with materialistic comforts and delights, Russians are now turning to “eternal India” in search of spiritual solace. In this moving account, Grigory Kubatian traces his meetings with Indian gurus and his journeys to sacred places in India in search of inner calm and freedom.

In recent years, Russians have revelled in pleasures of capitalism, good living and even conspicuous consumption. High-flyers appear satisfied with their new lives: they are well fed, well dressed, and surrounded by expensive, beautiful things. But what next? What’s the meaning of this life? It can’t be the endless proliferation of one’s belongings, can it?

Every person must have a purpose, an ultimate objective, even a spiritual mission, if you will. In this sense, the ritualised and dogmatic Christian teachings do not work for everyone. So, in their search for answers, many people have turned to…India. This is a country, they believe, where you can find something not to be had for love or money in the Western world: happiness.

More by Grigory Kubatian: Unreal City? Getting back to nature

Following the esoterics of the 19th century, tens of thousands of Russians are heading to India in an inner quest to unravel the mysteries of the universe, understand their interior selves, and discover freedom and happiness. Nowadays, you can see Russian faces well beyond Goa resorts, in ashrams, Buddhist temples, and meditation centres. Russians are seeking spiritual gurus, peddling Krishnaite literature, setting up yoga schools, cleansing chakras and even searching for Jesus Christ’s tomb in the Himalayas.

Surely, so many of them can’t be wrong! So I decided to see for myself the Indian esoteric tradition, and find out whether it could really make me happy.

I stayed in Gokarna, on India’s western coast in the Karnataka state. I decided to stay at an establishment called the Yoga Farm, located on a hill. It turned out that in addition to the accommodations, guests could also attend yoga practice virtually free of charge (for a donation of any size) with a Russian instructor, Sergei. That day, I went to my first yoga class.

That same evening, I was introduced to a genuine Indian sanyasi, a wandering anchorite, who lived in a cave near the sea, and dropped in at the Russian yogi's place for a vegetarian dinner. The sanyasi, whom everyone called Swami Ji (Revered Swami), agreed to teach me meditation. Plus, a Ukrainian healer named Prema who was also staying at the Yoga Farm welcomed everyone to her class on energy.

Thus I found three teachers in one day, and I eagerly took up my studies. I had to get up at dawn, which was followed by a shower, morning exercises, and a short walk down the hillside to Swamiji’s cave. After an hour of silent self-contemplation in the cave I returned to the farm for an hour-and-a-half of yoga. Then came breakfast, rest, and energy classes with Prema. Then, again, yoga and mantra chanting. Sometimes after dinner there was drumming around a campfire.

After a couple of weeks of this life, I felt an inner shift and deep-down transformation. I became a vegetarian, and lost interest in delicacies in general. Instead, I started to perceive the smallest sounds and sensations; I even thought I felt the energy of the earth, people and music. My dreams became vivid, and I had bad headaches during the day. I felt energy in the palms of my hands, and a throbbing sensation in my third eye area, as if a kind of beam was bursting out, but was being obstructed. Once it even seemed to me that the outside world was about to trickle down like a watercolour painting in the rain to reveal something different underneath it.

It may well be that I was over exerting to master esoteric techniques. A devastating example of dangerous experiments with one’s mind was unfolding right before my eyes: a Russian guy, a disabled addict, was dying slowly on the steps of a Hindu temple, a mandir, just a kilometre away from our Yoga Farm. Helping him was difficult since he was completely out of his mind. His addiction to stupefying charas, and dubious esoteric practices led the guy to delude himself into believing he was Shiva the Destroyer. In India, it is not in itself a crime to fancy oneself a terrible god. But for some reason, the obsessed man attacked a funeral procession that was solemnly carrying the deceased to a cremation site. Outraged, the procession members beat the guy up, and hung him from a gate by his legs. The beating and the hanging caused festering wounds on the guy’s legs. With no friends or money, he slept on the temple’s steps, where even wandering dervishes shunned him. Luckily, someone managed to get in touch with the Russian Shiva’s family before it was too late, and they took him back home.

From Gokarna, I moved deeper into Karnataka . When I stayed at the Jain village of Dharmasthala for the night, I went to the local temple and saw its walls decorated with the familiar images of chakras – the invisible whirling vortices responsible for human health and energy. You can think of them as ties that fasten a soul to a body like buttons.

I was surprised to discover that the secret esoteric knowledge only available to advanced yogis in Hinduism was on display for everyone to see in the Jain temple.

Jainism is an extremely non-violent religion. Surrounded by life wherever they are, religious Jains believe any human actions cause discomfort to the life teeming around them.

More by Grigory Kubatian: Once a prison, now a spiritual and tourist hub

In the sacred Jain town of Shravanabelagola, where I embarked next, there is a mountaintop statue of Bahubali, a Jain prophet. Legend has it that in his search for spiritual enlightenment he spent a year standing still in the thick of a forest meditating, so that vines started to grow over his naked body.

Sitting down on the hillside to meditate, I was literally overwhelmed by the fantastic energy of the place. Tears welled up in my eyes, and I felt as though I could mentally reach out to all my family and loved ones, and give them my message from the distance.

I went on with my journey, trying to learn more about Jainism and Indian esoteric practices. Enlightened gurus in Bangalore tried to open my “third eye” and taught me breathing techniques. In Tirupati, I “shed all my sins” in the Venkateswara Temple, and in Puttaparthi, I attended a meeting with miracle-worker Sai Baba. In Haridwar, I mastered a new ritual, fire sacrifice yajna.

By that time, I was already wearing a white kurta shirt and dhoti – a strip of fabric Indian men tie around their loins. Ascetics and yogis looked at me knowingly, while the beggars finally ceased asking me for money.

Having mastered the reiki healing technique, I learned to make my headaches – and any pain at all – go away, and sometimes even helped other people. I felt a constant tingling of energy in my fingertips, as though my hands had been charged. Even my eye colour turned from dark blue to bright blue.

In Rishikesh, I found yet another guru, a meditation teacher. This time around, I even managed to achieve what I knew from books: I felt energy that brought me bliss. It entered me from above like an uninterrupted ray of light. My breathing stopped, but there was no need to breathe. All I wanted was to sit in the lotus position, smiling blissfully like stone Buddha statues. It must have been the samatha – a trance state close to a lethargic sleep in which legendary Eastern mystics and yogis can soak and remain for months.

Was it the end of my esoteric journey that had begun in Gokarna? Hardly; most likely, it was just the beginning. But, wary of my own success and the craving to become a wandering sanyasi that possessed me, I returned home.

Soon afterwards, I started missing my yoga classes, waking up later, and I just stopped meditating. I even – the horror of it! – started eating eggs and fish again, although I never touched meat. I became “normal” again to the delight of my friends and family. My life returned to its usual humdrum rhythm, and the miracles disappeared. When I think back on that wonderful period, it seems to me that I was fairly happy then, and even close to unraveling the sacred Indian mysteries. Was that really the case?

Indians believe that everything is just “maya,” an illusion. If that is true, the illusion of walks around the foothills of the Himalayas is no more insane than the illusion of making a living in a megalopolis. The only difference is that the former is far more enjoyable and self-fulfilling.