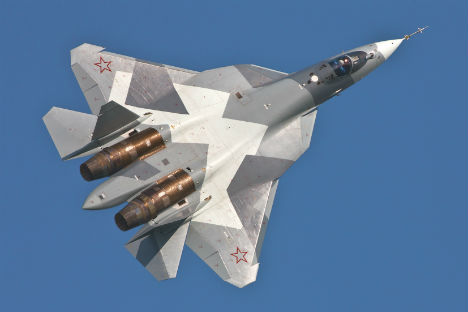 The Russian Air Force has started working on modernizing the domestic military aircraft fleet ahead of the completion of the fifth-generation jet fighter.

It has been decided to equip current fighter models with available thrust-vectoring engines. The first batch of upgraded fighters will be handed over to the Air Force by late 2020. It is also planned that all new T-50 fighters will have become operational by then.

“When a plane powered by a regular engine is taken to a wide angle of attack at low speeds, it loses control and stability and starts moving independently of the pilot’s commands, i.e. the plane moves randomly. The Su-35 has perfect controllability at any speed, even at negative speeds, for instance, when the plane drops tail-forward. The pilot can effectively put the plane in any angular position,” Sergei Bogdan, a Su-35 and T-50 test pilot, explained to Izvestiya.

A spokesman for the Sukhoi Corporation told Izvestiya about the planned delivery of new supermaneuverable aircraft to the Air Force. A source with the United Aircraft Corporation (UAC) confirmed this and added that the 117S (AL-41F-1) 3D thrust vectoring engines would be used to power not only the Su-35 and PAK FA (T-50 Prospective Airborne Complex of Frontline Aviation), but also the Su-30MK2 and Su-30MKI aircrafts. The Russian Air Force has signed its first contract with the Irkut Corporation for the delivery of 30 such planes to the Army.

A mock-up of the AL-41F-1 engine made by the Ufa Engine Industrial Association (UMPO) was recently presented by United Engine Corporation Managing Company (UEC) at the Defexpo India 2012 Security Systems Exhibition. The AL-41F-1 is a heavily upgraded version of the AL-31F engine with a thrust enlarged by 2.5 tons compared with the basic version. The vectorable jet nozzle with thrust vector control ensures supermaneuverability at low speeds and other unique features of the aircraft powered by the engine, the UMPO press service said.

The first batch of these engines was delivered to Sukhoi back in the summer of 2010. UMPO plans to supply 96 more engines to equip 48 Su-35 fighters by 2015.

The world’s first thrust-vectoring engine appeared in the export version of the Su-30 meant for India. The first contract for the delivery of such planes was signed more than 10 years ago. India currently operates 150 Su-30 aircrafts and plans to contract the delivery of another 100 machines. Furthermore, Russia supplies Su-30 models powered by these engines to Malaysia and Algeria.

“This is the same Indian version, but it is designed for our Air Forces and has Russian-made avionics. All of the new Su-27 class aircraft will now be powered by thrust-vectoring engines, because since 2011, the Defense Ministry has mostly sought to buy new machines,” a UEC spokesman said. According to him, technically these engines can be installed even in older planes, because they tend to wear faster than the body; however, when the time comes to replace the engines, they will likely install regular engines without vectorable jet nozzles, as the Air Force has plenty in its arsenal. As of now, the planes powered by the new engine are only used at pilot training centers.

Engines with vectorable jet nozzles will also power the MiG-29K carrier-based fighter aircraft, which the Defense Ministry is procuring for the Admiral Kuznetsov, the country’s only aircraft carrier. Klimov Engine Plant is already making these engines for the MiG fighters sold to India under the Admiral Gorshkov contract.

Aircraft designers keep working to perfect the PAK FA T-50, despite the fact that many developed countries have given up on their fifth-generation fighter plans to focus on sixth-generation unmanned aircraft. Experts agree that it would be reasonable to follow suit; however, Russia has neither the money nor time to develop its sixth-generation machines – the Russian aircraft fleet has not been upgraded in more than 20 years.

The T-50 took its maiden flight in January 2010. Completion of the missile systems designed specially for this fighter is scheduled for 2014. Sixty T-50 fighters are expected to be delivered to the Air Forces by 2020.