The Golitsyn Church at Dubrovitsy: A Passion for Divine art 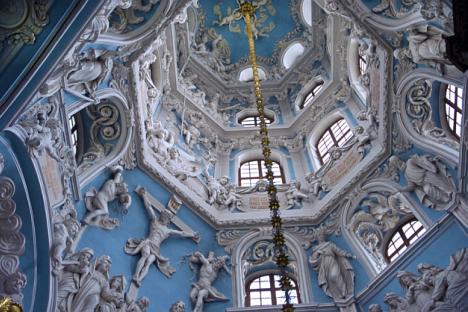 To the south of Moscow are a number of medium-size cities that serve as industrial and residential areas for the great metropolis. Among them is Podolsk, located on the Pakhra River and perhaps best known for the heroic sacrifices of its cadet schools in the defense of Moscow in October 1941. Although the reputation of Podolsk has little to distinguish it from its peers, in its vicinity is the site of the Dubrovitsy estate of Prince Boris Golitsyn, Muscovite grandee and tutor of Peter I.

Visitors to Dubrovitsy are greeted by a palatial estate house, originally built in the 1750s and rebuilt in a neoclassical style in the early 19th century. Used as an agricultural institute since the 1930s, the structure was restored after a fire in 1964 and can be visited on request. But the primary landmark at Dubrovitsy is not the mansion, grand though it is. Rather, it is the estate church, one of the most astonishing monuments in Russian architecture, a structure so odd and unexpected as to defy all expectations of what a Russian church should resemble.

Picturesquely situated on a rise near the confluence of the small Pakhra and Desna Rivers, the Church of the Znamenie Icon of the Virgin was begun in 1690. Prince Golitsyn was a dedicated Orthodox believer, yet he was also among the first of the Muscovite elite to associate in the 1680s with the community of foreigners in Moscow's "German Quarter." As a mentor to Peter (born in 1672), Golitsyn was able to share with the young tsar his extensive knowledge of Western culture.

After the death in 1682 of Peter's older half-brother, Tsar Fedor Alekseevich, Peter became co-tsar with his feeble half-brother Ivan V. During this divisive period, real power was held by another relative, Sophia Alexeyevna, who was opposed to Peter and his mother's family, the Naryshkins. In 1689, Peter openly rebelled against the authority of Sophia in a dramatic confrontation at the Trinity-St. Sergius Monastery to the north of Moscow. Despite his precarious position, Boris Golitsyn maintained unwavering support for Peter.

During these fateful years, the Dubrovitsy estate served as a refuge for Golitsyn. The church that he undertook at Dubrovitsy proclaimed both his devotion to Russian Orthodoxy and his abiding interest in Western forms of religious expression. Although the basic structure was completed in 1697, work continued for several more years on its unprecedentedly elaborate exterior and interior decoration. Even before its completion, the church was consecrated – in 1704 in the presence of Metropolitan Stefan Yavorsky and Tsar Peter himself. Golitsyn obviously intended that such a remarkable structure be officially presented on the highest level.

By the turn of the 18th century the Golitsyn and Naryshkin families had constructed of a handful of churches whose design embodied a distinctive centralized tower form. The saturation point of this style was reached in the Dubrovitsy church, clad in limestone (rather than the usual brick) and accented throughout with sculpture. Indeed, the Dubrovitsy church itself resembles a statue, and it is dedicated to one of the most statuesque icons of Mary--the Znamenie, or Orante, depicting Mary with hands outstretched in prayer and a medallion of the Christ Child on her torso.

The symmetrical plan of the church centers on an octagonal tower that soars above the four lobes of the first tier. Broad steps lead to each projecting lobe, thus creating a flowing, sculpted effect of the curved stone walls, whose surface displays the first use in Russia of smooth, chamfered rustication.

The terrace and the four lobes serve as pedestals for an unprecedented proliferation of carved details and statues – extremely unusual in an Orthodox culture that had viewed statuary as potentially idolatrous. Above the exuberantly carved cornice of the four lobes, the church's tower ascends to its culminating point--a magnificent and unique gilded crown that suggests regal authority and also symbolizes the crown of Christ.

The entrance to the church is through the main portal on the west side, flanked with statues of St. Gregory the Divine and St. John Chrysostom. On the roof above the west lobe is a statue of St. Basil the Great (visible from a distance). With these figures the entrance thus proclaims the august theological traditions of Orthodoxy.

Beyond the portal and within the vestibule is the usual space for votive candles, personal icons and religious literature. Above the vestibule is the crafted wooden platform for the choir gallery. But all this is merely a prelude, a passage toward the light of the tower interior, whose form conveys a visual effect that equals -- perhaps exceeds -- the exterior.

Although the elaborate baroque icon screen was vandalized during the Soviet period and has been only partly restored, the sculpted figures within the soaring tower are largely preserved. The primary theme of the statuary is the Passion of Christ, with a representation the Crucifixion in the center above the icon screen. Other sculpted groups include Christ bearing the Cross, and the placing of the Crown of Thorns. As on the exterior of the church, the crown is itself a central motif, with crowned statues of Mary Mother of God and King David.

Interspersed among the sculpture are plaster cartouches with inscriptions from medieval Latin devotional poetry. (Golitsyn had a fluent knowledge of Latin.) During a restoration of the church in the late 1840s, these inscriptions were considered outmoded and replaced by Russian equivalents. Fortunately, most of the original Latin texts have been discovered and returned to their place on the walls as the result of a careful restoration of the church in 2004, in connection with the 300th anniversary of its original dedication.

The identity of the church's builders and master sculptors has been the subject of much speculation, with little firm evidence. Historians generally assume that the craftsmen -- particularly for the interior work -- were Italian-Swiss, as were many of the masters in St. Petersburg in the early 18th century. Tsar Peter actively imported classical statuary, nude or semi-nude, from Italy as a signal of his cultural revolution. The statuary at Dubrovitsy, although religious and fully clad, represents a catalog of contemporary sculpture.

It is telling that Peter I -- in the early stages of a desperate war with Sweden -- should have attended the dedication of this church, built by a tutor who had played a significant role in Peter's opening to the West. For the church at Dubrovitsy represents at once an extreme variant of Muscovite ornamentalism and the quickening pace of Westernization that would turn Russian architecture from Byzantium to Rome.