The next 65 years: what India can learn from Russia 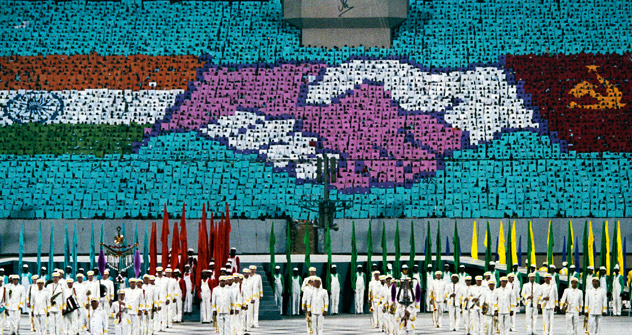 As the two countries mark the 65th anniversary of the establishment of diplomatic relations, in this 2-part series, Ajay Kamalakaran looks at how Russia and India can benefit from each other’s experiences.

When the toasts are made to the India-Russia friendship, some people will talk about Russia’s traditional love for old Bollywood films and Raj Kapoor in particular, others will mention the great fan following Yuri Gagarin had in India and of course, no discourse on the friendship would be complete without a mention of the 1971 Bangladesh Liberation War when the Soviet Union used its ‘nyets’ at the United Nations Security Council to help India. The two countries, however, have a lot to gain if they can follow certain examples set by the other.

What India can learn from Russia.

1. Women’s empowerment: Whether it’s at airports, shops, restaurants or all kinds of offices, you see a lot more women in the streets of Russia. This is obviously an area where Russians gained from the Soviet system but the long term benefits are obvious. There is also a far greater societal acceptance of relationships between unmarried couples in Russia. This creates a lot less desperate men on the streets and makes the environment a lot safer for women.

Urban India is changing, but considering the fact that more than 60 percent of India’s population lives in villages, the country still has a long way to go before there is a semblance of gender equality. Affirmative action at the work place, greater industrialisation and an education system that stresses on the importance of equality and fairness for both sexes can help improve the situation for women in India. Urban India also has a long way to go before shedding its ultra-conservative image.

2.Urban Planning: Indian cities are an urban planner’s worst nightmare at the moment. With the exception of Delhi, very little planning had gone in to the expansion of any of the metro cities in India post-independence. The worst culprit, by a landslide, is my hometown of Mumbai, where the so-called suburbs with their chaos do the greatest harm to the city’s international reputation.

With a growing shift of the population from rural to urban areas, it’s very unlikely that Indian cities will be able to handle the influx. One initiative to reduce this influx is the Delhi-Mumbai Industrial Corridor, for which, work has already commenced. India can look at the Russian example of town planning that took place after most of the country was flattened by Nazi Germany thanks to the Second World War. No, I am not suggesting that 5-floor Khrushchevkas don the streets of each new Indian city, but better planning of city layouts and ensuring that each new city has adequate public transport will make urban life in India, a lot less stressful.

Indian cities could also do with active support from the authorities for the promotion of cultural events. Even cities like Magadan in the Outer Russian Far East have a state-supported cultural season that spans the academic year.

3. Sports: I have heard a billion excuses as to why a country of a billion plus can’t produce world class athletes and can barely manage 3 medals in the Olympic Games. There is obviously no dearth of talent in India but a combination of bureaucratic problems, a lack of political will and insecure families that prefer their children avoid sports as a career, ensures that most sports except cricket, lie in the doldrums in India.

Russia, on the other hand, has always been a star on the international sports scene, winning a huge number of medals in both the summer and winter Olympics. Where there is actually a lesson for India is the women’s tennis revolution in the country. Russia wasn’t even close to being a tennis power before Boris Yeltsin made it a national priority. India needs to take a serious look at what Russia has done right to become a sporting power.

4. The Concept of National Interest: The infighting between political parties and the power of NGOs, social crusaders and those who make a living out of exploiting the legal system in India, often leads to delays in projects and decisions that are in the best interests of the nation. Those who use the excuse that these are all “part and parcel” of a democracy need to understand that India loses a great deal when critical issues face roadblocks.

Read the 2-nd part: The Next 65 years: What Russia can learn from India

The concept of national interest and what’s best for the country is ingrained in the Russian psyche. I take the example of the Sakhalin-2 oil and gas project, where Russia was getting a raw deal from Shell. Vladimir Putin stepped in and raised several important cost and environmental issues, essentially leading to the Anglo-Dutch major to cede control of the project to Gazprom. Not every Russian may have agreed with the methodology of the authorities but were able to accept that the action was done in the best national interests. If we, in India, can only agree on this concept of national interest, many roadblocks to development would be eliminated.

5. Development of Regional Languages: India has been independent from the tyranny of British Rule for almost 65 years now, but the English Language dominates life in the country. I am completely against the extremists that call for replacing English with Hindi, but I equally oppose those snobs (with colonised minds) in the country who look down on those that speak Hindi and other regional languages.

Despite populist measures that include renaming of cities, Indian languages have seen little development over the last 65 years. Such is the lack of scientific, technological and economical words in these otherwise-rich Indian languages, the most educated of Indians are more comfortable with using English to their “native” languages. It’s sad that there are very few places in the country where an educated man can even express his love for his wife in his native language.

Russia has made sure that the Russian language has stayed in tune with the changing world and adapted the language to include new words. What would it be like for Indians to have the same kind of confidence to express themselves in their native languages, the way Russians can? I don’t call for diluting English, given the fact that the language has given India a competitive edge, but we do need to create opportunities for the development of one of India’s greatest treasures: the large number of languages and dialects.