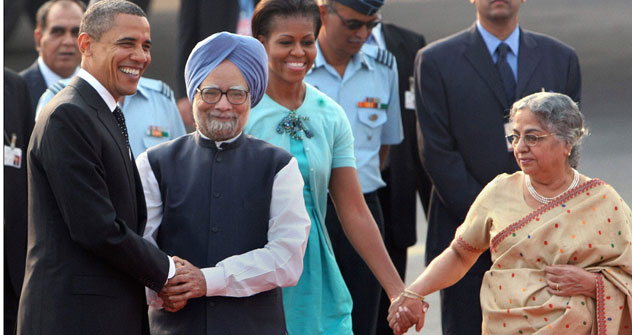 With India’s growing influence in Asia-Pacific region, the USA sees India as an alternative to Chinese hegemony in Asia-Pacific and a beneficial economy for greater Trans-Pacific Partnership (TPP), reckons Jagannath P. Panda.

Often seen as the “centre of gravity” by many, Asia-Pacific has been in the news for some time, particularly for the renewed American focus on the region. While most countries in Asia-Pacific, such as Australia, Japan and the smaller South-East Asian countries do hold strategic relevance to America’s Asia-Pacific strategy, it is perhaps India that tops currently the priority list in its design. Though it is easy to place in order the vitality of India in US foreign policy, and mainly in the context of the Indo-US relations; yet going into details into the American strategic mind and the current foreign policy objectives explains the real issues of this American rising interest towards India in its Asia-Pacific design.

India has frequently been seen as pro-Western by many. Whether among the Republicans or the Democrats in the US, there has been greater focus on India in the US strategic circles in the last decade. The Indo-US relationship has seen greater ascendancy on every account, be it at the economic front or on various strategic issues. On Asia-Pacific policy as well, there has emerged a greater convergence of interests between the two countries recently. The recent set of events in the South China Sea, where the Chinese seem to be gaining ground as a central power, the ever-increasing vitality of the Indian Ocean in terms of energy resources, routes and power rivalry, and the non-traditional security threats in Asia-Pacific, including terrorism, are some of the factors that have prompted the Americans to renew and focus on Asia-Pacific afresh, while taking India seriously. This renewed American focus is a result of the post-Afghanistan strategy, where it seems to focus currently its military resources more towards the Asia-Pacific after decades of occupancy in the Afghanistan region. The vitality of this US policy design is aptly indicated in a recent perspective given by Robert Willard, Commander of the US Pacific Command where he indicated that the US is advancing its relations with countries in the region including India.

Read more: US wants to come back to Asia

Though many American citizens would propose that without India, the US can still successfully continue it’s pre-eminence as an Asia-Pacific power, the reality is that India does figure at the top in American foreign policy interests at all levels; and without India, American strategy in Asia-Pacific would flag. The India-US understanding over Asia-Pacific has grown slowly over the years. It goes back to 2006 when the two countries converged on the idea of greater cooperation in the region by taking Japan into account. During the George W. Bush regime, Indian Prime Minister and the US President declared the creation of an Asia-Pacific Partnership on Clean Development and Climate to meet the growing energy needs of the region. The US not only welcomed India’s interest in the Integrated Ocean Drilling Programme, which was more of an international marine research endeavour, led by both the US and Japan, but also forged a broader geo-political understanding for further cooperation in Asia-Pacific. Since then, the collaboration between India and the US has been measured, until recently, when the Obama administration renewed its focus towards the region.

There is constant reiteration among American foreign policymakers and security experts that India is a vital partner for the United States’ Asia-Pacific strategy. For example, Admiral Robert Willard recently announced that a special forces “Pacific Assist Teams” has been incorporated in South Asia, particularly in Nepal, Bangladesh, Sri Lanka, the Maldives and in India. The Indian Government refuted the claim as “factually incorrect”, that the “US Special Forces teams have never been stationed in India in the past, nor are such teams stationed in the country presently”. The episode could be indicative of some communication gap: nevertheless, it indicates that there is a new level of confidence about India in the American military and policymaking circles. India has emerged as a vital country not only for the region but also for the broader American geo-political objectives. North Korea, Iran, terrorism, energy and Afghanistan are some of the other issues in Asia which still remain problematic for the Americans at the greater global level. To tackle some of these pressing problems, the Americans are constantly looking for Asian alliances, in which India fits best as the most prominent and effective power.

The first and most important pointer in this regard is India’s renewed focus on South-East Asia, which has coincidentally been beneficial to America’s Asia-Pacific design. In the last few years, India has not only maximized its relationship with the South-East Asian countries, but also renewed its bilateral military exercises with countries like Thailand, Vietnam and the Philippines. More than that, Asia-Pacific is being taken more seriously in the Indian military and diplomatic circles than ever. These policy shifts have strategic convergence with America’s Asia-Pacific policy, which always wanted to sideline Chinese supremacy in the region.

The second pointer is the upward trend in India-Japan relations. At the geo-political level, both countries are seen as adversarial to China. Keeping the rise of China in view, the Japanese have always been serious about pushing a credible Indo-Japanese alliance at the broader Asian level. However, frequent political change in Japan has not encouraged many in India to see Japan as a credible strategic partner: until recently, when both converged upon the idea of a Comprehensive Economic Partnership Agreement (CEPA). It is not the growing India-Japan relations only; the India connection at emerging multilateral mechanisms makes the US see India as a natural strategic partner in Asia-Pacific. The reference point here is the newly forged India-Japan-US strategic dialogue, which indicates the emerging power calculus in favour of the US, where India is an effective regional collaborator. Never mind the rhetoric about the first “triangular” India-Japan-US strategic dialogue: the very fact that this association has emerged and binds together three democracies in Asia-Pacific does indicate the vitality of the region from strategic and security perspectives. The relationship between India and the US, and India and Japan is at a transformational stage, which favours the broader American Asia strategy. More than these, the US wants to see India in its fold because the USA has been disturbed by the rising political trends and rising political understanding among the three great-powers- India, China and Russia- on multilateral issues. Rising multilateral understanding among India, China and Russia in BRICS and Russia-India-China (RIC) formulation are adversative to US’s regional interests and design. In short, as far as the multilateral issues are concerned, the Americans don’t want India live jointly with China and Russia.

The third pointer is the obvious factor of China. While the Americans are sure that Sino-Indian relations are known for strategic rivalry and competition, India is the most appropriate power at the Asian level that could emerge as an alternative to Chinese hegemony in Asia-Pacific. While Japan and Australia are two main constituents in the US-planned Asia-Pacific strategy, India comes as a natural choice that is largely seen as an anti-China power in the region. Moreover, it is the “China challenge” that binds together most of the Asia-Pacific powers, where India naturally fits in the broader American design. Besides, the Indian economy has emerged as one of the bigger economies in the world. Along with the Japanese and the South-East Asian economies, the Indian economy could be beneficial for the Americans for greater Trans-Pacific Partnership (TPP), which may not necessarily include the Chinese economy.

What makes India vital in America’s strategic calculus is its aim and objective for a stable and secure Asia. Independent India has been advocating a “liberal Asia” without external influence. However, this dream has been disturbed by maritime insecurity, terrorism and the pre-eminence of China. Contemporary politics do not compel India to ask for or advocate liberal Asia. Rather, India would like to promote its strategic interests and goals without really disturbing the current order in Asia, where China is the pre-eminent power. China’s pre-eminence in Asia facilitates India to play second fiddle in Asia, even if aligning temporarily with an outside power like the United States. It is apparent that the US would like to see India as a vital partner in Asia-Pacific.

Dr. Jagannath P. Panda is Research Fellow at the Institute for Defence Studies and Analyses (IDSA), New Delhi, India; and currently a Carole Weinstein Programme visiting faculty at the University of Richmond in Virginia, USA, and a Visiting Scholar at the ACDIS programme, University of Illinois in Urbana Champaign.