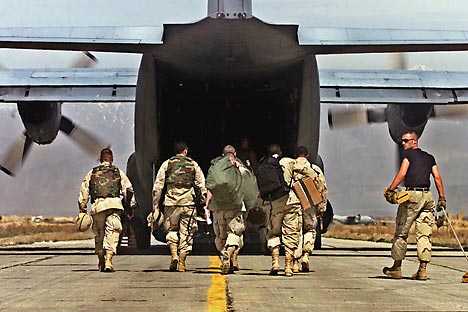 U.S. Army soldiers prepare to board a C-130 aircraft at the army base flightline in Bagram, Afghanistan, for redeployment to Kandahar, Afghanistan. Source: AP

Before withdrawing from Afghanistan, Russia wants NATO to describe how the mission it carried out under the UN mandate has been fulfilled.

Before starting to withdraw international forces from Afghanistan, participants in the military operation must report to the UN Security Council on the fulfillment of their mandate, according to Russian Foreign Minister Sergei Lavrov. Judging from statements by high-ranking Moscow officials, Russia believes that NATO has failed to carry out its duties under the UN mandate for resolving the Afghan problem.

Afghanistan will be the central theme at the NATO summit in Chicago in May. U.S. Assistant Secretary of State Philip Gordon said that at the conference, NATO leaders “will take stock of the transition process, defining a new phase of transition in 2013 when ISAF’s mission will shift from combat to advising and assisting Afghan national security forces. Heads of state and government will also agree a vision for NATO’s post-2014 role in Afghanistan,” Gordon said.

Russia has not been invited to Chicago because the summit will not involve a Russia-NATO meeting. That meeting was cancelled over ongoing differences between the U.S. and Russia on missile defense structures in Eastern Europe. But even though it will not participate in the discussion over the future of Afghanistan, Moscow is seriously involved in Afghan affairs. Assistant Secretary Gordon stressed Russia’s role in combating drug trafficking and terrorism in Afghanistan and recalled that, thanks to the transit agreement, the U.S. had transported more than 280,000 of its troops to and from Afghanistan through Russian air space as of the end of 2011.

At the same time, Moscow is very sensitive to Afghan issues because the country has a serious impact on the situation in Central Asia – part of Russia’s traditional sphere of influence. This is not only about Caspian oil or Turkmenistan gas, but also about the threat of Islamic fundamentalism and the expected return of the Taliban once the U.S. pulls out of Afghanistan. Additionally, Russia is critical of the U.S. plan to maintain a military presence in Afghanistan beyond 2014.

Lavrov was unequivocal about Russia’s position on troop withdrawal: “We do not quite understand the rationale of artificial deadlines in such matters. The International Security Assistance Force, whose backbone is the U.S. contingents, is in Afghanistan under the UN Security Council mandate. I assume that, before leaving, it is necessary to report to the Security Council on the fulfillment of the mandate that NATO has undertaken to implement. So far, the threat of terrorism is undiminished and the drugs threat is growing stronger.”

Head of the Federal Drug Control Service Viktor Ivanov, an influential member of President-elect Vladimir Putin’s team, was even more forthright. He told a press conference on April 5 that he is not ruling out the possibility that members of the Shanghai Cooperation Organization (SCO) or the Collective Security Treaty Organization (CSTO) would file lawsuits with international courts over NATO’s failure to perform its mission in Afghanistan under the UN mandate.

Ivanov noted that the 1948 UN declaration on the rights and obligations of the United Nations member states outlines the responsibilities of states working under a UN mandate. Additionally, a UN document dating from 1996 states: “International responsibility for the actions of the forces assigned to conduct such operations rests with the state or group of states that have undertaken such obligations.”

Ivanov added, “In the case of Afghanistan, NATO countries have volunteered to carry out the operation and they have been conducting it there since 2003,” and naturally, “the question of legal responsibility arises.”

According to Ivanov, “We see an obvious failure of the declared goals.”

Responsibility for fulfilling the UN mandate was also mentioned, albeit in a muted way, during the assessment of the coalition forces actions in Iraq. After the intervention in Libya, Moscow made it clear that a UN Security Council mandate had been abused in the move to conduct an air operation.

Now that draft resolutions allowing foreign interference in Syrian affairs are on the desks of UN diplomats, the problem of responsibility for the results of the war in Afghanistan is becoming more urgent.