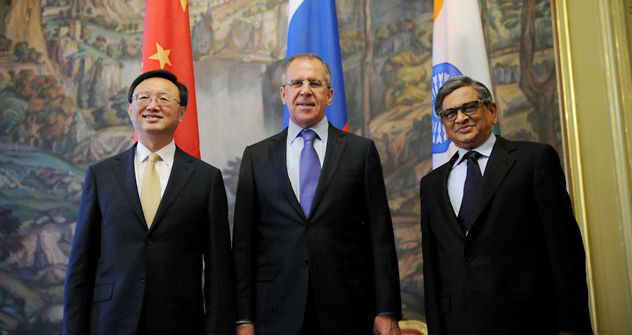 The RIC Foreign Ministers meeting in Moscow sets a question: against rise of BRICS and revisit of Americans to Asia, is RIC a rhetorical bonding or a strategic reality in the regional contemporary politics?

On April 13, the 11th round of Foreign Ministers meeting took place in Moscow among the three vital neighboring countries – Russia, India and China – which jointly form the RIC. The next RIC meeting is scheduled to be held in India in 2013. The Moscow meeting came a fortnight after the 4th BRICS summit in New Delhi on March 29, which has these three countries as members, along with Brazil and South Africa. It also coincided with the 65th anniversary of establishing India-Russia diplomatic ties. The meeting was held after a gap: the last meeting was held in 2010 in Wuhan.

During the meeting, the three RIC Foreign Ministers reiterated the weight and importance of the forum in addressing the global challenges, and stressed the fact that the current global politics is in transition. Global sensitive issues like Iran, terrorism, and North Korea also figured in their trilateral discussions. This meeting also reiterated the need for cooperation among themselves within the framework of G‑20, BRICS and the East Asia Summit. But while RIC is another forum for the three countries to interact with each other, one needs to ask if the RIC formulation has any bearing after the rapid rise of BRICS.

The emotion of the RIC was initially based on forging mutual trust and cooperation among the three countries, but RIC has been overshadowed, in the view of many, by the rise and progress of BRICS. Many have dismissed RIC as simply a rhetorical bonding, lacking substance through which real power cooperation can be forged among these three countries. For many, political ambitions and strategic contradictions make the very existence of RIC an oxymoron. Yet, the determinants of the same RIC countries’ foreign policies suggest that the RIC is a necessity and a strategic reality of their contemporary regional politics, which remain key for the progress of BRICS and the Shanghai Cooperation Organization (SCO), where these three countries are again connected at the regional level. The current political jingle of the “post-American” world states that the RIC is vital to regional politics and remains a balancing unit to downplay the overriding China-India strife.

The three RIC countries have been trying to put life into their association for a long time. A range of security and economic underpinning binds them together. The very necessity of the RIC goes beyond the limits and parameters of the three members’ foreign policy realities and touches the reality of the current century, where the global political order is more in favor of RIC countries today than at any previous point of history.

At a practical level, many social and political issues seem to highlight the RIC thesis today. Apart from aiming to forge political understanding among themselves, the RIC members intend to focus on issues relating to public health, agriculture, climate change, energy, countering terrorism and establishing communication among the academia and business communities. One of the most important issues forming part of the RIC proceedings is countering terrorism. All the three countries are vulnerable to terrorism. Moscow needs regional and global networks to fight terror. China also has not completely moved out of the radar of the Uyghur extremists. It still has problematic relations with its trusted regional ally, Pakistan, as regards the encouragement of terrorism by the latter. India also needs to find strong regional and global allies to fight terrorism. New Delhi’s notion of fighting terrorism is not entirely different from that of Russia and China. India’s eagerness to join the SCO further underlines that there should be solid understanding to tackle terrorism among the three countries.

The RIC is not military-centric. It is “power” centric, combining posture and political perspective at a time when there is a need for South-South formulation to excel in global politics and to unite for reforming the global institutions. The vitality of the RIC is seen against two constructive realities: (a) the rise of BRICS; and (b) the revisit of Americans to Asia vis-à-vis the Asia-Pacific region. The rise of BRICS has not really reduced the impact and vitality of the RIC. Rather, there are fresh contours that need to be interpreted within the current context of Asian power politics, which increases the importance of the RIC further. The rise of BRICS has sufficiently indicated that the three mainstream powers of the RIC formulation are the centre of South-South politics and North-South divide. Members of the RIC are the leading figures not only for cross-continental developing countries but also for the construction of the unity of the social underpinnings of the developing societies for whom unity among themselves is an essential requisite.

The mainstream countries like Russia, India and China also represent versatile cultural societies, populations and political systems. The RIC formulation suggests that it is not difficult to establish bonds even across different and diversified political systems and societies. In fact, continuity and regularity in RIC meetings is conducive to the rise of BRICS. While the RIC countries are the main populous countries, their combined economies have been the crux of the South-South story. More than these, greater regional and global political underpinnings make the RIC bonding a valid entity. If the influence and reach of extra-regional powers like the USA need to be curbed in Asia, there is a need for RIC to meet and put their act together: American presence in Asia is not in the interests of any of them.

More than the global strategic realities, the internal dynamics of the RIC makes it a special unit. It contributes to the act, role and balancing posture of Russia in China-India foreign policy objectives. Russia wields influence over both China and India, which are known for bilateral and regional strategic rivalry. The post-cold war politics suggests that the Russian presence has brought China and India together, at least in multilateral dealings. Though Russia is not expected to find a solution to every single problem that exists between the two countries, the rising regional complexities between them could be checked with Russian influence and regional narratives. The South China Sea is one area in this context where a strategic rivalry between the two is already becoming somewhat shrill. Russia must take the lead to convince the Chinese about the vitality of the South China Sea for energy exploration for most of the powers in the region, including India, which China has started opposing.

The Moscow RIC meeting did indicate that China and India discussed at length some of their strategic and security quarrels. Bilateral meetings do not always shape the relationship discourse between countries; multilateral meetings are crucial to normalize rising tensions. The necessity of the RIC is a regional strategic reality. This is a massive reality for Asia, at a time when extra-regional powers are trying hard to connect with Asia because of the region’s strategic demands and economic strength. America’s new ways and means to revive its strength in the Asia-Pacific region are not in the interests of Asia’s harmony: they will only benefit US interests and policies. Asia’s future lies with major-power politics within Asia, especially how mainstream neighboring countries like Russia, China and India behave with and believe about each other. The RIC comes as a confidence-building network among them.

Globally, these three countries are powerful enough to attract other powers. This is important at a time when Russia is in transition, and its global profile is also on the verge of expansion after it entered into the WTO not long ago. Its future Presidency in the G20 is another indication that Russia’s global profile is reviving, at least in the global multilateral forums. The Russian advocacy of bringing a multilateral thrust between China and India is significant, as it was the main proponent of the RIC formulation. Russia has always been a strong sponsor and advocate of the RIC thesis. The Russian perspective and vision has been to promote a ‘multipolar’ world structure which should bind the Russia-India-China trio together. In brief, the importance of the RIC should be judged beyond the parameters of foreign policy complexities. The vitality of the RIC rests with the current substance of multilateral politics, which demands frequent meetings, discussion and planning no matter how much clout the three countries have in themselves.