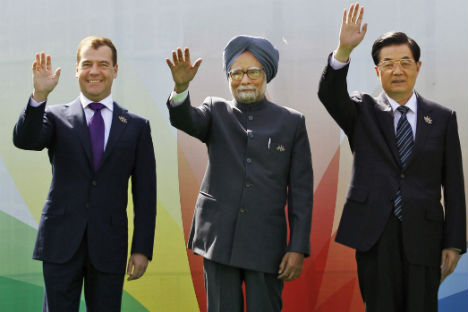 The Indians and the Chinese are almost equally in need of global power which would contribute to regional balance and stability. A simple analysis shows that Russia is the only actor that can play this role.

The summit of the informal network of rising centers of global power known by the acronym BRICS held in New Delhi from March 28-29 gave politicians and experts greater confidence in the organization’s long-term geopolitical viability. BRICS was based on the affinity the economies of its member states have for one another, and that gave rise to doubts about its future, particularly its ability to represent the positions of its five countries on a consolidated basis. In addition, BRICS’s foreign policy component lags far behind its economic activities, something that all of its members recognize. The informality of BRICS also shows up in the way it is organized.

The BRICS summit in India highlighted Russia in terms of the organization’s ability to consolidate international positions in order to create a meaningful counterweight to the West, which has the United States at its forefront.

BRICS is facing numerous objective and subjective difficulties en route to becoming a completed geopolitical project. The continuing strategic distrust between China and India is among the foremost obstacles. Beijing and New Delhi have not overcome their mutual suspicions. On the contrary, they grow more suspicious of one another with each passing year. The autumn of 1962 can be considered the point at which their antagonism began growing. That was when a territorial war broke out between the two giants of South and East Asia and ended with the Chinese winning a positional victory. This situation has changed little in the 60 years since the war.

The opponency between the two countries has had both positive and negative aspects for other global actors that would like to have closer relations equally with both India and China. It is not difficult to see that Washington derives most of the benefit from the strategic Indo-Chinese confrontation. The United States is improving its relations with India and is putting China on the defensive, as a country under threat of a naval blockade of all of its vital lines of communication. The threat to China’s marine and land access to the Middle East through India is increasingly more vividly apparent in China’s recent vulnerability to the United States and its Asia-Pacific allies in the South China and East China seas..

The situation between India and China is predominantly negative for Russia, but it appears that Moscow can also derive strategic benefits from the Indo-Chinese conflict. The Indians and the Chinese are almost equally in need of a so-called “third force” that would function, if not as an arbiter between them, at least as a global power which, by its very presence and smooth relations with both states, would contribute to regional balance and stability. A simple analysis shows that Russia is in fact the only actor that can claim to be that so-called “third force.”

Although the United States has greater capabilities to exert influence in South and East Asia and the Asia-Pacific region, it nevertheless lacks equally smooth relations with China and India. Washington persists in viewing India as a deterrent to China, and that American strategy is not new to China.

Russia is well positioned to enhance its image as the “third force” in the eyes of China and India. But in some foreign policy declarations and economic projects it is difficult to mediate the Indo-Chinese confrontation and give BRICS the appearance of a finished geopolitical project.

From our standpoint, Russia’s potential as a “third force” for China and India can and should be strengthened militarily and politically. South Asia, East Asia and the Asia-Pacific region place a high value on sea power in all its manifestations — from commerce to the military. A large merchant fleet and a strong naval force in the area are worth a great deal in this vast expanse. Also highly valued here are projects to expand geopolitical influence and maintain the balance of power.

The complex Indo-Chinese relations push Beijing and New Delhi to form intersecting alliances that contribute to the maintenance of regional balance. For example, India is expanding its relations with Vietnam, which is a traditional Chinese rival in East Asia, and China is improving its relations with Pakistan — the country most hostile towards India — which is located at the crossroads of South Asia and the Middle East.

Russia has an opportunity to increase its influence in relations with China and India, and not just in the patterns of alliances and rivalries developing in South and East Asia. Recent data from Moscow’s military-technical cooperation with its Eurasian BRICS counterparts also inspire optimism about the military and political aspect of Russia as a “third force” in the eyes of the Indians and Chinese. According to Stockholm International Peace Research Institute (SIPRI) data, India accounted for 10% of total world imports of arms and military equipment between 2007 and 2011. SIPRI’s experts say that the most significant arms transfers to India include 120 Sukhoi Su-30MKI fighters and 16 carrier-based MiG-29K fighters, which were bought from Russia.

Russian analysts would add to that the 350 T-90S tanks bought from Russia, the contract to upgrade the Vikramaditya (Admiral Gorshkov) aircraft carrier, joint production with Moscow of the BrahMos supersonic anti-ship cruise missile, involvement with Sukhoy to develop a 5th-generation fighter and other projects that have made Delhi a leader in the global weapons import market.

SIPRI’s experts have documented a recent trend in the global arms market — the countries of Asia and Oceania are the largest importers of weapons and military equipment. Between 2007 and 2011, the region’s countries imported 24% more arms than they did from 2002 to 2006 (accounting for 44% of total arms imports), and India held the top spot in Asia.

Russia took second place (after the United States) in military sales on the world market for 2007-2011, with a 24% share. India and China occupied first and second place, respectively, among countries buying Russian arms and military equipment for the preceding five-year period. India accounted for 33% of Russia’s arms sales abroad, and China — 16%.

According to the Russian Center for Analysis of World Arms Trade (TsAMTO), in 2012 Russia will sell India arms and military equipment worth about $7.34 billion, comprising about 80% of India’s imports. According to the same TsAMTO estimate, however, after 2013 the United States will be the largest exporter of arms to India.

Statements by Russia’s president at the BRICS summit in India show that Moscow wants to pursue a consistent policy of improving relations between India and China. Medvedev said that “our strategic goal would be to gradually transform BRICS into a full-fledged mechanism for cooperation on the major issues of global economics and politics,” and “this modernization will be based on a concept that we arrive at together.” Those words effectively transferred the foreign policy baton to Russia’s new head of state.

Thus, all three of Eurasia’s major powers — which are members of BRICS and encompass 40% of the world’s population, 20% of the global economy and 15% of world trade — need a joint foreign policy concept, through which the association can become a geopolitically complete project. And Russia is the “third force” that can bring the Indo-Chinese strategic conflict into balance.