The 200 marines, or a strategic pivot? 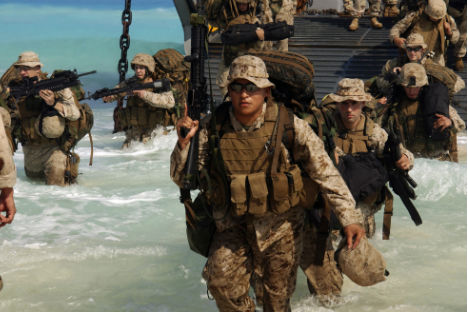 200 U.S. marines has arrived to northern Australia to protect American interests in Asia. Boris Volkhonsky examines what are these interests and where they are located.

As reported by the Associated Press, the first detachment of 200 U.S. Marines has arrived in northern Australia, where a permanent joint training hub is taking shape as part of a U.S. shift of military strength in the Asia-Pacific region.

This is the follow-up to November, when the United States and Australia announced plans to send more U.S. military aircraft to Australia and to rotate up to 2,500 Marines through the northern city of Darwin to better protect American interests across Asia.

In late March, The Washington Post wrote that the expansion of U.S. – Australian military ties also includes possible drone flights from a coral atoll in the Indian Ocean (the Cocos Islands) and increased U.S. naval access to Australian ports – there are plans to expand the Stirling naval base in Perth.

Well now, what is this all about? Definitely, the two hundred marines (or be it even 2,500) cannot alter the strategic situation in this part of the world. Then why is the U.S. so preoccupied with its military plans in the southern parts of the Pacific and Indian Oceans?

The answer lies in the fact that this is the area which is becoming, as predicted by Robert Kaplan in 2009, the center stage of all global politics. The U.S. apparently is still preoccupied with the events in the Middle East which will not let go of too easily in the nearest future. But the main challenge to the U.S. strategic interests comes from a different source – and that is China.

In recent years, China has been extremely busy establishing its presence in the Indian Ocean. The “String of Pearls” strategy consisting in building a chain of seaports in littoral countries like Kenya, Pakistan, Sri Lanka, Bangladesh and Myanmar, was on the one hand, aimed at securing the transportation routes, and on the other hand – at encircling China’s main rival in the region, India, from the sea.

More so, ports in Pakistan and Myanmar could facilitate ground transportation routes which would enable China to bypass the narrow Malacca Strait, now swarming with pirates.

Now imagine that some kind of row arises between China and its neighbors in the East and South (Taiwan, Vietnam, the Philippines, to name just a few). It would be sufficient for the U.S. Seventh Fleet to send just one aircraft carrier accompanied by a couple of destroyers and join forces with pirates in the Malacca Strait in order to block all transportation routes from the Middle East to China. Energy-starved China would not last long in a standoff with its neighbors. The 2,500 marines based in Australia will be quite handy.

But if and when China’s strategic plans concerning the “String of Pearls” are implemented, the picture will change dramatically. With transportation routes and pipelines connecting China to the Indian Ocean overland, it would be able to resist any military or political pressure to much better effect. So, this is something the U.S. is not ready to put up with.

And it comes as no surprise that almost simultaneously with the arrival of the first marines to Australia the U.S. State Department announced a partial lifting of sanctions against Myanmar. Following the visit to that country by the U.S. State Secretary Hillary Clinton in early December last year, the U.S. intention to establish its strategic presence in Myanmar and the desire to gradually push out China became obvious.

Also, the recent flirting of U.S. congressmen and State Department with Baloch separatists in Pakistan was not caused by concern about the notorious “human rights”, but by the mere fact that the China-built port of Gwadar is located in Pakistani Balochistan province.

So, it is not just two or twenty-five hundred marines. It is a much broader “Great Game” going on.