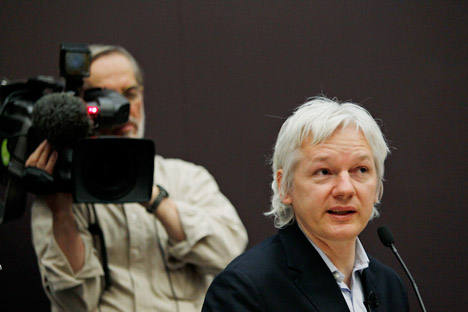 WikiLeaks founder Julian Assange kicked off his new career as an interviewer of “terrible radicals” on Kremlin-funded RT TV on Tuesday by hosting Hezbollah leader Hassan Nasrallah for a 45-minute discussion.

Nasrallah, speaking by video link-up to Assange, who is under house arrest in London as he fights extradition to Sweden on sex crime charges, told the world’s most famous whistleblower that Hezbollah supported Syrian President Bashar al-Assad as he had “served the Palestinian cause vey well.”

Lebanon-based, Shiite militant group Hezbollah is considered a terrorist organization by the United States and the United Kingdom, but not by Russia.

Wikileaks founder will launch a talkshow on RT

Nasrallah also revealed, in a pre-recorded interview broadcast on RT, the Moscow-based, English-language news channel formerly known as Russia Today, that Hezbollah had contacted the Syrian opposition to urge them to enter into talks with Assad.

Nasrallah also said "civil war is the only alternative” to dialogue in Syria. "And this is exactly what America and Israel want.”

RT is widely seen as a Kremlin project in image enhancement and Assange earlier predicted he would face media criticism over his decision to work with the channel.

“There’s Julian Assange, enemy combatant, traitor, getting into bed with the Kremlin and interviewing terrible radicals from around the world,” he told RT when asked what reaction he expected to the show.

WikiLeaks has said Assange’s guests for the 10-episode show are an "eclectic" selection, including politicians, revolutionaries, artists and intellectuals.

RT has not revealed the identities of Assange’s interviewees.

"RT is rallying a global audience of open-minded people who question what they see in mainstream media and we are proud to premiere Julian Assange's new project,” the channel’s editor-in-chief, Margarita Simonyan, said on the channel’s website ahead of the show.

Assange told RT he had chosen to interview people who “normally don’t get a voice.”