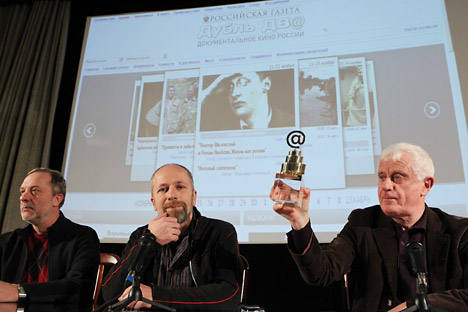 April 2012 marked the third time that the Double Dv@ Internet Film Festival, organized by Rossiyskaya Gazeta, has given first-time film directors a chance to make a name for themselves. Eight debut features by Russian directors will be available online on the Rossiyskaya Gazeta website from April 11 to 18. Each day of the festival will focus on a new film, which will appear on the site at 3 p.m. Moscow time (7 a.m., U.S. East Coast) and will be available for viewing for 48 hours. The online audience will be able to rate the films on a scale of one to 10 and share their opinions directly with the filmmakers.

According to the festival’s organizer, Rossiyskaya Gazeta film critic Valery Kichin, more than 70 directors have made their debuts in the festival over the past two years, yet many pictures have gone unnoticed.

This is not a new trend: many of the films produced during the post-Soviet era have not received the publicity they deserved. The main reason for this failure is that distributors were not sure that independent films of this kind would generate profits. As a result, few prints of the films were made and these were shown only in Moscow.

“When large distributors gave up on us, we became more audacious,” said Sergei Loba, director of “Shapito-show,” which is taking part in the competition program of Double Dv@.

“We issued 50 copies and earned more than $1 million. If we have two or three experiments of this kind, our distribution system will become more flexible. We are working on the idea of funding from individual donors, anticipating our cinema possibly finding itself in a severe crisis. Independent authors need this festival very badly in order to build up their popularity. They need to make use of any chance they have to communicate with the viewer, using any channel possible.”

This year’s Double Dv@ debuts come from directors of different generations. In addition to the competition program, which shows films made by up-and-coming directors, this year’s festival featured the debut films of such great Russian directors as Andrei Konchalovsky, Vladimir Menshov, Sergei Solovyov and Karen Shakhnazarov.

“We are making films for our viewers – there is no other way for us. The main problem for Russian cinema is currently not the viewer, but the lack of cinemas – an independent film has no chance of getting into the cinema. There are almost no cinemas willing to show non-blockbusters,” said Sergei Oldenburg-Svintsov, director of the film “Golubka,” which was shown in the competition program. “However, viewers have been changing for the better owing to the Internet. There are movie blogs, film discussions… People listen to what others have to say. Some Russian viewers told me that they saw “Golubka” after their British friends advertised the film. It turned out that they showed my film in the UK with English subtitles. I knew nothing about it.”

In the 1990s, the few movie theaters that were still operating in Russia were empty, but Russia is currently one of the key markets for many film distributors. “I guess the main reason is that people are becoming sincere and sensitive, they need someone to talk to, they are tired of the lies on TV – so, as soon as directors started making films suiting their mood, people went back to the cinema. This Internet festival is exceptionally important for development of young cinema,” said actor Alexander Korshunov.

People are hardly likely to trade the big screen for isolated viewing on their desktops, yet Internet exhibitions and live Internet shows make it clear that young Russian cinema needs to develop new platforms in order to survive.

Plot: The film derives its name from the old Spanish song “La Paloma” about difficult love and eternal hope. In the film, a woman seems to have to forgotten about love as she busies herself with her children and career. But she fights for the love of a great man who, like her, is in search of harmony.
104 minutes. 2009

Plot: Taisia, a janitor in a children’s hospital, learns that her son, missing in action during a long-ceased Caucasian war, is dead, and her life loses its meaning. Then, she kidnaps a terminally ill child from the hospital to nurse him back to health and give him all her love.
90 minutes. 2011

Plot: “Ivanov” is an adaptation of Anton Chekhov’s play of the same-name about a man who inflicts misery on all those around him. In a bid to solve the mystery of the protagonist, the director makes use of different versions of the play, including early Chekhov texts.
170 minutes. 2010

Plot: A well-to-do St. Petersburg programmer comes home only to find that his apartment has been demolished, and all his stuff has been sent 60 miles away to a new address. The programmer-turned-hobo sets out on a journey to find his new home and every hour gives him a clearer understanding that he is not exactly a human being in the new environment, that he is defenseless and cannot fight the deepening absurdity.
96 minutes. 2010

Plot: Sergei Mokritsky’s debut consists of four stories about love – awakening, fading, self-sacrificing and a love that is no more.
97 minutes. 2008

Plot: A Siberian village has prided itself on its herd of pedigreed horses for decades. The villagers managed to save the horses during World War II, but now the herd is unlikely to survive the new revolution and new capitalist order. The farm runs up a debt during the first lean year and the only way out, according to its director, is to slaughter the horses. But a young boy nicknamed Vorobey makes the only right decision.
This film won the Grand Prix of the XXII All-Russian Shukshin Film Festival
90 minutes. 2010

Plot: In this melodrama inspired by the songs of Viktor Tsoi, a young man falls in love with a girl he meets on the metro.
93 minutes. 2011

Plot: A directionless young man takes part in a secret scientific experiment that makes him handsome.