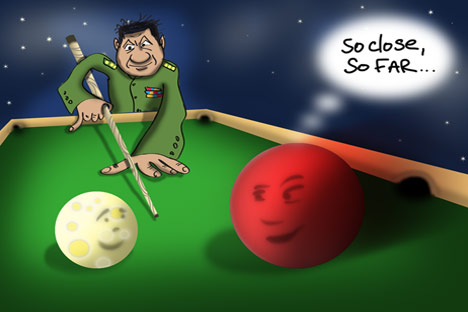 Roskosmos intends to join the ExoMars program, but puts conditions on its participation that will help develop Russia’s domestic space industry.

The Russian Federal Space Agency Roskosmos and the European Space Agency (ESA) have agreed to partner on the ExoMars project, one of the biggest Mars exploration projects of the last few decades. The agreement has not yet been finalized, and approval by the Russian government is pending, but the deal is likely to be signed this fall.

“I expect this agreement to be signed in the first half of the year or late summer at the latest… We are interested in finalizing it as soon as possible in order to have the legal grounds for allocating money for scientific equipment,” Roskosmos chief Vladimir Popovkin told reporters.

Related: Back to the Moon: When, Why and How?

Originally, Roskosmos had no plans to become involved in the project, but stepped up after NASA backed out citing budget constraints.  However, the Russian side’s decision to come aboard is dependent on three conditions: Roskosmos will contribute its launch vehicle in payment for the partnership; Russia will supply its own instruments instead of NASA’s, and all scientific results will be the intellectual property of both the ESA and the Russian Academy of Sciences.

The ExoMars project has a reasonable cost even by Roskosmos budget standards – the program will cost a total of $1.4 billion, according to the current project budget, which is acceptable for Roskosmos, which has an annual budget of about $4 billion. Nevertheless, a certain increase in financing will be required.

By joining ExoMars, Russia will be able to phase down its own Marsnet project, which planned to create a network of meteorological stations on Mars.

“ExoMars, if successful, will have the same scientific mission as Marsnet, which was part of our program. Marsnet focused on studying the climate of Mars and this same objective is among the ExoMars priorities, although there are some other objectives as well,” said Lev Zeleny, Director of the Space Research Institute of the Russian Academy of Sciences, in an interview with RIA Novosti.

“The funds that the Federal Space Program has allocated for Marsnet will be used to pay for our participation in the ExoMars project,” Zeleny added.

Russia’s financing of the Proton vehicle for the first launch could be partially covered by the insurance payments for the lost Phobos-Grunt sample probe.

The plans for ExoMars involve two launches. The first, scheduled for 2016, will deliver Trace Gas Orbiter (TGO) into Mars orbit – it is designed to map methane sources on Mars. If methane is discovered on the planet, this could mean the possibility of life there. In 2018-2019, the orbiter will be transferred to a lower orbit, where it will continue collecting scientific data and transmit them from the ExoMars rovers.

The landing module, with a static meteorological station that will include Russian instruments, will become the second part of the first launch payload.

Mars vs. the Moon

For Roskosmos, exploring Mars is as important as exploration of the moon, but the agency’s moon program is further along.  Russia’s moon rovers Luna-Resurs and Luna-Glob are to be delivered to the surface of the moon to explore the south and north poles, respectively, in 2015. Further plans for the moon program involve additional moon rovers and a cosmonaut to walk on the moon – although this is unlikely to take place before 2020.

Additionally, Roskosmos still has plans for a Martian expedition of its own. Unmanned vehicles will pave the way – Mars-Grunt is expected to land on Mars in mid-2020 and then deliver samples of Martian soil back to Earth. A manned mission to Mars might follow in the more distant future, but this would require further exploration of the Moon and the creation of an intermediate base there.

Both Roskosmos and Russia’s top leadership want Russia to retain its status as not only a conduit between the Earth and space, but also a space power. This is part of the motivation for taking part in the ExoMars project – at the moment, joint projects are the only way to jump-start a space program reliably. Even so, some experts are concerned that excessive involvement in foreign projects could frustrate restoration of the key domestic production necessary for making scientific equipment for space vehicles.