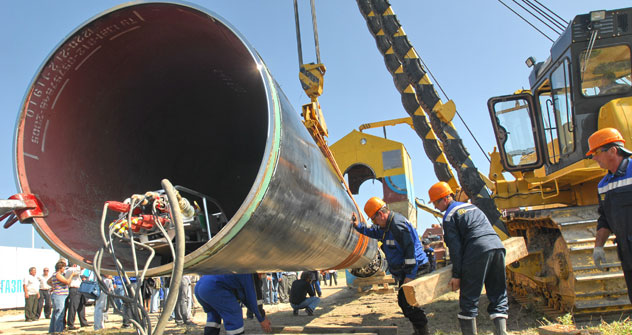 On 18 April in Ashkhabad, Pakistan and Turkmenistan are to sign an agreement on construction of the Turkmenistan–Afghanistan–Pakistan–India gas pipeline (TAPI). Previously, similar documents were signed between Afghanistan and India. The project may alter the situation in the region by changing the energy status in the member countries and creating new jobs.

It took the TAPI project participants twenty years to agree on the key issues and come within reach of launching the project. Today, the quantities of Turkmenistan’s gas, its prices and establishment of a consortium to build the pipeline are under discussion.

The idea of bringing Turkmenistan’s gas to South Asian markets has been mooted since the 1990s. In 1993, the Argentine company Bridas proposed a “Central Asian Gas Pipeline” project. Later, the American Unocal headed up the international Cent-Gas consortium set up in 1996. But the unstable situation in Afghanistan prevented the project from being launched. The name of the project has changed several times over the last two decades, depending on the countries and companies showing an interest in it, but it only existed on paper anyway. A game-changing event was the May 2010 visit to Delhi by Turkmenistan‘s President Gurbanguly Berdymukhamedov, when India evinced an interest in importing gas. As early as December 2010, a summit of the four states held in Ashkhabad gave a new lease of life to the TAPI project.

“Security was, for a long time, the main obstacle to implementing TAPI. A large stretch of the pipeline will be laid through unstable parts of Afghanistan and Pakistan. Kabul and Islamabad have assured the other participants that they will be able to protect the pipeline from militants. Kabul is ready to commit 7,000 troops to doing so. The authorities are also negotiating with the warlords to ensure the safety of the pipeline”, Omar Nessar, Director of the Contemporary Afghanistan Studies Centre told Nezavisimaya Gazeta. In his opinion, Kabul expects help in protecting the gas pipeline, but Washington, though supportive of the idea, has not come forward with any concrete proposals. Pakistan intends to secure the pipeline itself. But international forces may also be brought in to protect it. In any case, at the UN, Berdymukhamedov is advocating creation of international mechanisms and a special agency to secure safe transit of gas to the world markets.

A Pakistani delegation led by the Federal Minister for Oil and Natural Resources Asim Hussein will arrive in Ashkhabad to sign the agreement on 17–18 April. The agreement was to be signed last year, but differences arose over prices, according to his secretary Mohammed Chodri Ejaz. Now the principles for forming the international consortium and financing the project remain to be agreed upon. Major US and Russian companies have shown an interest in the TAPI project. The final agreement is to be signed at the next meeting of the Trans-Afghan project partners in Ashkhabad on 24 May.

India and Pakistan would like a share in developing the Galkynysh gas field where construction of the pipeline will begin. The $10 billion, 1,735 km TAPI pipeline will run from Turkmenistan through the Afghan cities of Herat and Kandahar to Fazilka on the Indian-Pakistani border. First supplies are planned for 2015.